In 1956, preparations had begun for the 1958 World’s Fair in Brussels. This was to be the first World’s Fair held since the end of World War II, the concept behind the Expo was to celebrate the rejuvenation of civilization from the destruction of war through the use of technology. This World Fair is best known for the musical advances that was combined with architecture, creating a gestalt through an experiential encounter where body meets sound and space. 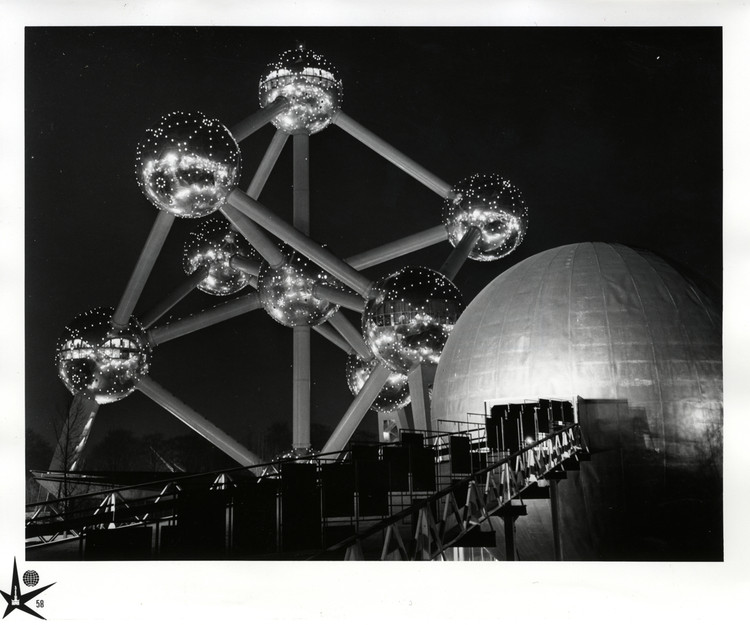 At the forefront of this new journey was the Philips electronics company. Not wanting to be outshone by the Americans and their developments with color television, the Philips Electronics Company decided to step away from displaying commercial goods and instead create a unique experience for the thousands of people that would be attending the Expo. The experiential space was created by putting together an international team consisting of an architect, an artist and a composer to create a pavilion displaying electronic technology in as many forms as possible, serving arts, culture, and the overall betterment of humankind.

The Philips electronics company turned to the office of Le Corbusier for the final commission of the pavilion. Le Corbusier replied by saying that, “I will not make a pavilion for you but an Electronic Poem and a vessel containing the poem; light, color image, rhythm and sound joined together in an organic synthesis”. Le Corbusier would take on the sole task of developing the interior of the vessel, leaving the exterior design of the pavilion to the responsibility of his protégé designer Iannis Xenakis, whom was also trained as an experimental composer and thusly would also create the transitional music that guided you into the formal space of organized sound.

For the composer of the Poem Electronique, Le Corbusier commissioned Edgard Varese, choosing him over other well know composers of the time such as Benjamin Britten and Aaron Copland, both of whom the Philips company preferred over Varese. Le Corbusier gave minimal input into the details of how the interior of the pavilion would work, instead giving only a vague concept of what the experience should accomplish. The basic guidelines given to both Xenakis and Varese were that the interior was to be shaped in a manner similar to the stomach of a cow, with the form coming from a basic mathematical algorithm. The concept was that audience members would enter in groups of 500 at ten-minute intervals, for two minutes, as the audience filed in through a curved passageway, they would hear Xenakis’s transitional piece before entering a room that would go into darkness, enveloping the audience in a space of light and sound for eight minutes while an accompanying video displayed images along the walls of the pavilion. At the end of the eight-minute piece, the spectators would exit, digested, through another exit while the next group filed in.

With Le Corbusier busy with the planning and design of Chandigarh, the majority of the decision-making for the Philips Pavilion was made by Iannis Xenakis. This would later lead to conflicts between Le Corbusier and Xenakis, with Xenakis eventually leaving Le Corbusier’s office to further pursue his individual work within architecture and musical experimental composition.

For the final design of the Pavilion, Xanakis, with a team of engineers and artist, developed a three-pronged tent, constructed with thin-shelled concrete panels of hyperbolic paraboloid shapes. The execution of the design involved a tensile structure of steel cables strung from steel posts at the end of the tent to form the hyperbolic parabaloids. The complex shapes of the pavilion made it impossible to build a conventional poured concrete structure, the solution reached by Xenakis and his engineer Hoyte Duyster, was to create a system of precast concrete panels hung in tension from wire cables.

The resulting Poem Electronique along with the pavilion, was the first electronic-spatial environment to combine architecture, film, light and music to a total experience made to functions in time and space. It was through these visually inspired concepts that elevated the Philips Pavilion into a complete experience where one could visualize their special movements through a space of sound, light, and time. While the physical form of the pavilion may have been temporary, for those with the privilege of experiencing the space it provided them with a temporary relief of sound through space in their respective time.