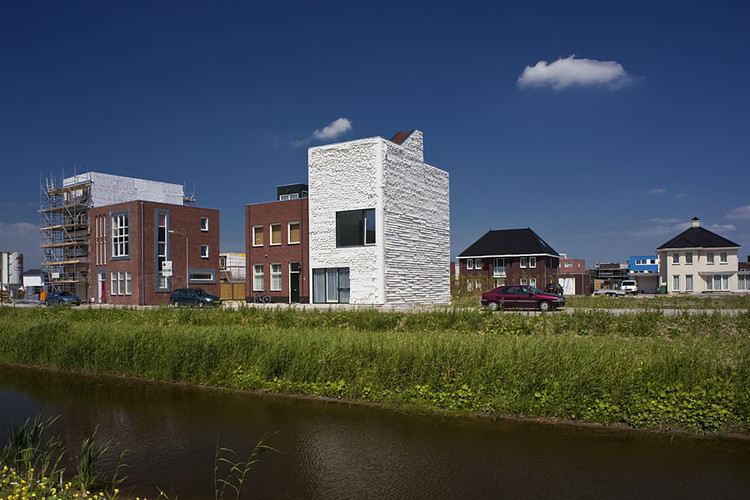 Text description provided by the architects. The house is built on one of the 350 plots designated for construction by private builders, which was an initiative of Alderman Adri Duivesteijn in the Homerus quarter of Almere. The “Herenhuis” plots, where an extra high ceiling clearance of 3.5 m at ground floor level was required, are suitable for both residential and work functions.

The assignment was to achieve a spacious home with a studio artist / exhibition space downstairs and housing on the top floors. The principal, Rob Veening, after having lived in Canada for many years, expressed the wish that the house should not be minimally sized and narrow (like many Dutch residences), but spacious, open and giving one a sense of freedom and movement. A dream assignment for space loving designers, this project has the added challenge of a very limited budget.

To save costs, and to make the construction of such a large volume financially viable, a number of measures were taken. The house (hull) was made wind and watertight by the contractor Postma, after which the client himself finished it: stairs, insulation, interior finishes, interior walls, doors, equipment and installation of the external cladding. Contractor Postma’s advantage is that, in addition to their own timber structure workshop, they also produce their own windows and door frames. This eliminates contractors traditional 10% surcharge cost over these items. It also made it possible to make very large window frames and doors (2.7m high), which could be realized without any fuss.

One of the most expensive items in a building budget is the facade which is usually the first item that is reduced in ambition. This always has serious consequence for the architectural image. From there came the radical proposal.

The municipality of Almere has C2C in high esteem and even drafted its "Almere Principles"! This course offered a chance to see how much they really meant it, and how much liberty they were willing to give private clients. From this, cc studio developed the idea to produce the facade from residual waste, using their contacts with the tent industry. The extremely durable, non-combustible, residual material comes from rolls of PTFE (Teflon) coated fiberglass fabric, used in the industrial manufacture of conveyors belts for the food industry. This special material was completely sponsored by Verseidag-Indutex from Krefeld, Germany. The 5 m long rolls (about 1200m2 gross) were cut by the principal and cc-studio into strips and placed as overlapping shingles and tacked on a backing of osb panels. The flexible material moves with wind, creating a lively image. In the sidewall up to a height of 7 meters no pattern is applied due to possible future building that must, by regulation, build up to a minimum height of 7 meters.

Through integrated design it was also possible to omit the traditional steel portal for stability. The entire stability comes from stapled Fermacell (fiberboard) plates in the front, rear and side facades.To ensure the internal spatial relationship vides and split-levels were used. The artist's studio downstairs is, at the side of the garden façade, visually connected with the living room on the first floor trough a vide. The studio therefore has an extra window giving it more light deep into the studio.

In the middle of the building volume a central vide with at the top a skylight was carved out, visually connecting all the upper floors. A continuous internal space is the result which has a very pleasant light quality and orientation. An additional advantage is that the study / TV room, located at the top level street side, does not need windows nor received them to save costs. Due to the split-level in the front part of the living room, the ceiling height reaches 4.5 m, giving it a real mansion (“herenhuis”) quality. The dimensions of the wooden doors 3.5 m wide x 2.7 m height contributes also to this sense of space. But due to all those large measurements the scale of the building is quite difficult to read and can only be measured by comparing it with the traditional sizes of the neighboring house.

Finally, the house has a lower energy requirement than demanded by law (A EPC required then was 0.8, achieved 0.6) and also features a number of other sustainability features which made it eligible for “Green” financing (a lower interest rate for sustainable building). It was a special, very nice and close collaboration between client and designers that made the best use of the somewhat unconventional opportunities. 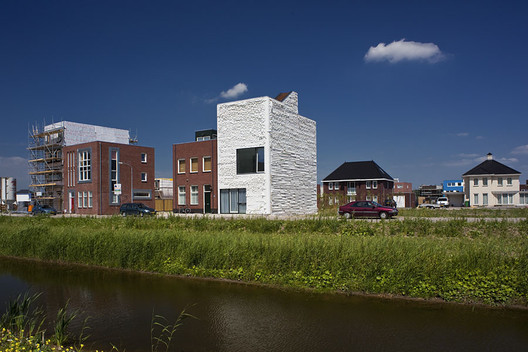