Text description provided by the architects. The single-family house at Händelallee 47 was built in an atrium style for the 1958 'Interbau' building exhibition. Located at the southern end of the development area, it was designed as one of three similar adjacent bungalows by the architects Alois Giefer and Hermann Mäckler. In addition, Alois Giefer provided the master plan for the new district.

The house, which has no basement, is built from 50 cm by 2.5 m aerated concrete components and included an adjacent garage. It was designed for a family with two children. Originally, one entered through a vestibule and onward through the small kitchen to reach the living room on the left. These three rooms constitute the rectangular front side of the dwelling. The second, private area of the house is accessible from the living room. A hallway leads alongside the patio to the two (by contemporary standards) modest children's bedrooms, the master bedroom, bathroom and storage room. Built-in closets extend along the whole length of the hallway. All three houses, which, unlike their neighbors, have south-facing gardens, are listed as property number 31 in the Interbau 1957 exhibition catalogue (now Händelallee 43, 45, 47).

At the outset of the project in September 2008, the Händelallee 47 house, unlike its neighbors, was found to be mostly in its original condition. In the fifty years since its construction, only minor repairs were made to the roof and the exterior of the house. The original night-storage heaters were still in use. The garden facade was painted completely white so that, contrary to its original state, there was no discernible difference between the fibre cement panelled and plastered areas of the exterior. The first owners had replaced the original kitchen and living room flooring with laminate, and that at the rear of the house with carpeting. The kitchen and bath were renovated in the early 1980s.

We decided to relinquish most of the former garage and add the space to the relatively small living area, thereby creating an anteroom with fireplace, which corresponds to the depth of the private section of the house. A new, 50 cm wide, floor-to-ceiling window illuminates the fireplace room and conforms dimensionally with the construction principle of the houses. The leftover garage space, which now functions as a storage room, has been walled off from the anteroom and is reached by the former exterior garage doors. In order to create a more open and brighter garden-facing living area, we enlarged the existing two windows by extending them to the floor, where previously the parapet height had been determined solely by night-storage heaters.

The most important procedure involved the roofing of the patio. The former kitchen window was lengthened room-high and is now a passageway to the new patio dining room. The wall which previously divided the kitchen from the living room was removed, allowing for an informal open kitchen which connects the living and dining areas. Furthermore, the glass roofing of the former patio permitted us to retain the slender, transparent design of the single-glazed molded concrete block patio walls without further heat loss. This concrete block wall was not re-plastered and painted; instead, it was merely protected from any further erosion, enabling the age and character of the building to remain perceptible.

Thanks to the polished concrete paving slabs (heated) and the preservation of the planting bed in the floor, the dining room retains the character and design of an outdoor space. Lime cement plaster and a newly installed fibre cement roof parapet reinforce this impression. The shape and colour of the kitchen pay tribute to the creative expression of the original construction. Great care was taken throughout the renovation to ensure the use of by Ms. Christine Becker, the various exterior surfaces could be restored to their original condition. 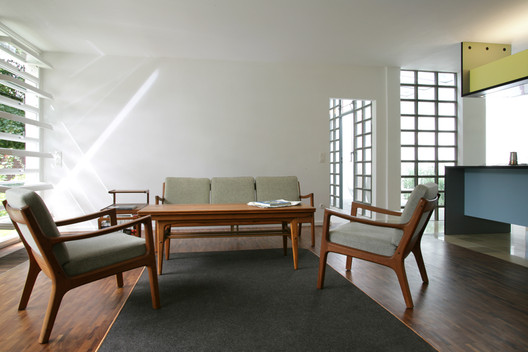