Every year, the AIA stages a competition for an intervention that brings to life the historic city of New Orleans. This year the institute selected a scheme by Gernot Riether that proposed a series of glowing spherical enclosures sited within the hidden courtyards of the city’s distinctive French Quarter. They would be illuminated in the evening, dramatically modulating the host environment and bringing attention to these romantic, mysterious and usually private spaces, typically located deep in the block, away from the street. 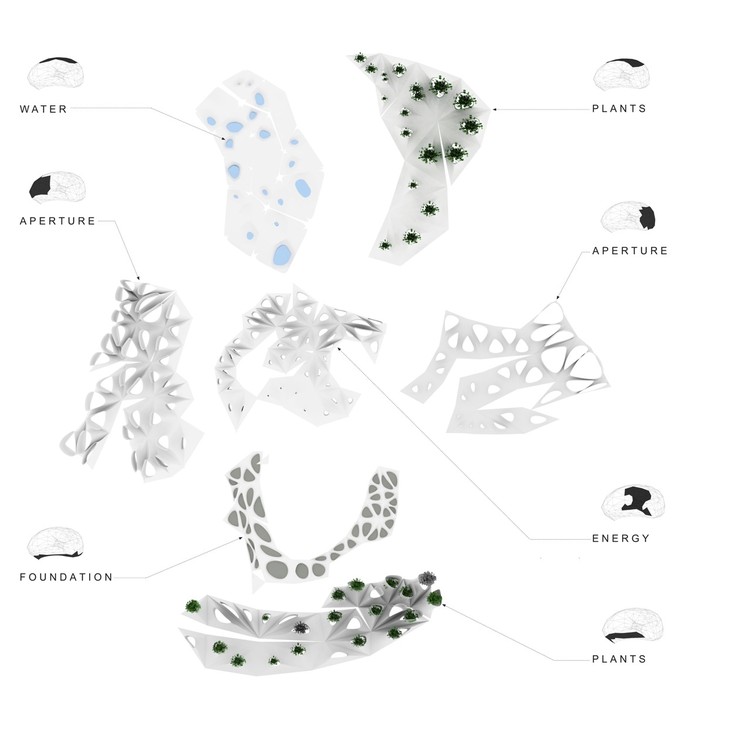 The pavilion not only demonstrates the work of the digital design build studio that Riether leads at the Georgia Institute of Technology in Atlanta, but also uses glycol-modified polyethylene terephthalate (PETG). This material can either be produced from recycled plastic, or more pertinent to this location, from sugar cane: a plant that has been an integral part of the culture of Louisiana for over 200 years.

The pavilion is situated in the beautifully restored courtyard of a local gallery owned by Arthur Ross, close to North Rampart at 1025 Orleans Street, the 18 sqm pavilion comprises 320 different PETG cells. The cells were prefabricated and assembled into six larger components, designed to stack and fit into a small truck, and to be installed in less than two days by Riether and eight students. The pavilion cost $2,500 to build.

The pavilion’s geometry distorts in response to specific site conditions, solar orientation and programmatic requirements, such as lighting, seating, viewing, planting and water harvesting, with each of the cells shaped by scripted rules. Using CNC technology, each template was cut from PETG sheets, before being thermoformed into shape using a neatly designed adaptable mould.

Pinching and reconnecting the surface was used as a technique to increase the structural performance of the envelope. At strategic locations the skin morphs into bracing and column like systems. Structure and building envelop are combined into a single material system.

Using PETG as a material suggests a negative carbon footprint. According to one of it’s world’s largest manufacturer, “Dow Chemicals” every 0.5kg of PETG produced from sugar cane represents a total gain of almost 1kg of CO² removed from the atmosphere. Since the AIA pavilion used 123kg of material, the production of the pavilion would remove 246kg of CO² from the atmosphere. This demonstrates that producing PETG from sugar cane has tremendous environmental benefits that might make plastic the building material of the 21st century.