Save
U house / NDA 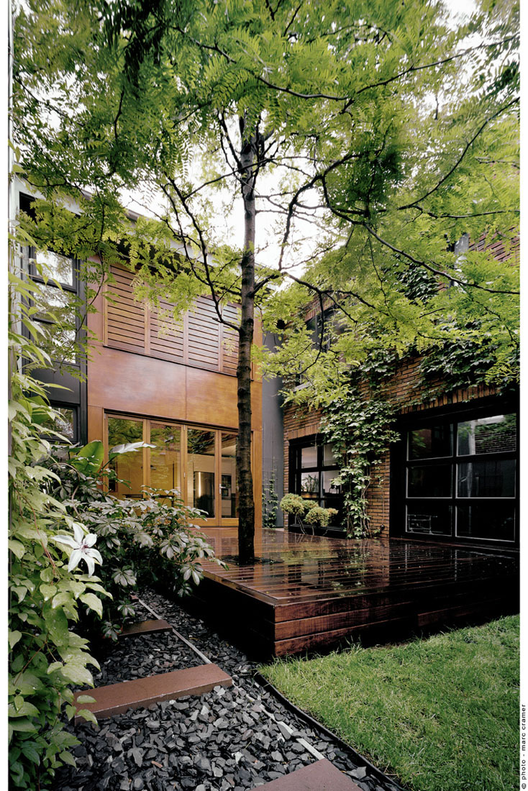 Text description provided by the architects. The U-House was designed by architect Natalie Dionne to house both the family residence and her office space. Along with her partner, who works in cinema, she drew plans and began construction in 2003. Originally, the couple bought a small industrial building and a rare vacant lot adjacent to it. The U plan was achieved by adding two additions to the original building, one at each end of the vacant lot.

The U-House exploits the idea of fluidity between interior and exterior spaces. The Ipê wood deck which is an extension of the dining room's inlaid wood floor helps to confound the boundary between inside and outside when the large accordion style door is opened. At the other end of the L shaped deck, one of the original buildings huge windows is actually a garage door that also opens up fully to seamlessly integrate the living room with the garden. For added spatial continuity and a layered effect, the wood and steel façade elements of the new additions were mapped to the interior.

Doors and windows of Cedro wood, marine plywood panels and cedar bifold shutters are all stained for uniformity and mimic the color of the brick on the original building (dating back to 1926).

A large Sunburst Honey Locust was planted the day after the foundations were poured to provide shade to the largely fenestrated south facing façade during the hot summer months. Its acid yellow foliage in early spring inspired the accent color found throughout the interior.

In summer, at night, the upstairs windows are opened and the shutters are closed. This ensures sufficient ventilation, guarantees privacy, protects from the rain, and keeps the south-facing rooms nicely cool.