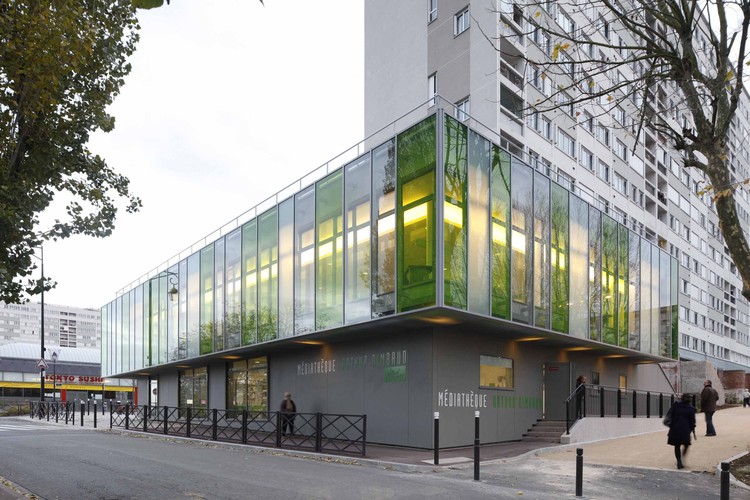 Text description provided by the architects. The Arthur Rimbaud Media Library and Cultural centre was constructed in the context of the city of Anthony's urban renewal program. The city launched a public competition for the construction of a media library at Place des Baconnets with the aim of opening up the secluded Noyer Doré neighbourhood as well as offering cultural activities to the residents of this disadvantaged neighbourhood by promoting social interaction. The construction of the media library would be a symbol of the revival of the neighborhood.

We proposed a simple and bright architectural style designed to clearly convey the nature of the media library as a contemporary public facility, and a space of cultural circulation and recreation with its amenities open to the public. The building might have otherwise appeared as a closed space, reserved for an initiated elite, demanding a commitment to regular attendance and as such, intimidating to the public. Our building expresses the ambitions of an attractive and vibrant media library, offering a variety of activities and events, a place where the public can stroll amongst the bookshelves and disc gondolas as well as see exhibitions or simply read books.

There has always been a steady flow of pedestrians at the site due to the central and strategic location of the land, with its proximity to the RER train station and the shopping centre, and this would naturally promote the use of the facilities, but the small size of the site was restrictive. In order to ensure maximum floor space, we designed a slight cantilever to the first floor, using transparent facades of coloured glass in various sizes creating a dynamic appearance, making the building seem aerial and bright, straightforwardly presenting the contents of the building to passers-by, all this creating an important symbol for the neighbourhood. The facade of the first floor is mostly glass on three sides, and boasts a panoramic view of the Massy valley. In contrast, the ground floor is well-anchored to the ground, like basement, but with some areas of glass to clearly expose the contents of the media centre.

The north-facing facade of the media library is the largest, making its aspect ideal. The entry of natural light is controlled by each façade: the south facade is completely blind, the north, west and east facades are treated as double façades on the first floor. The double skin acts as a buffer to control the natural evacuation of heat and reducing solar exposure to the interior glass walls. This also ensures excellent acoustics relative to external noise, which was a major consideration for the project mainly due to the noise of traffic at the intersection as well as that of passing trains.

We gave much attention to the roof of the media library which was treated as a fifth facade, considering its position and situation relative to the 14-floor existing residential building and the many direct views from this building on the roof of the media library. The option of a green roof was therefore ideal, making the roof a sort of “terrasse jardin”, rather than making it an afterthought simply attached to the adjacent building, while also providing benefits in terms of the environment, energy conservation and reduced maintenance.

The organisation of the library is simple and easy to understand. The separation of the public and private areas is well defined. From the ground floor entrance, we find the reception desk on the left, multi-media and news media for adults on the right, while at the end of the hall a multi-purpose meeting room closes off the public area. The private, administrative area is located behind this public area, with the two spaces separated by the large central concrete wall. The stairway leads up to the first floor and its large two-story wall of vivid colour beckons the public upstairs and links the two floors using natural overhead lighting. This relationship between the two levels of the media library improves the organisational clarity of the public space. The first floor was designed as a large open area with a minimum of supporting walls allowing for the complete flexibility of the media library's reading areas and enabling the immediate understanding of the organisation of the first floor, which is reinforced with signs installed in the ceiling. 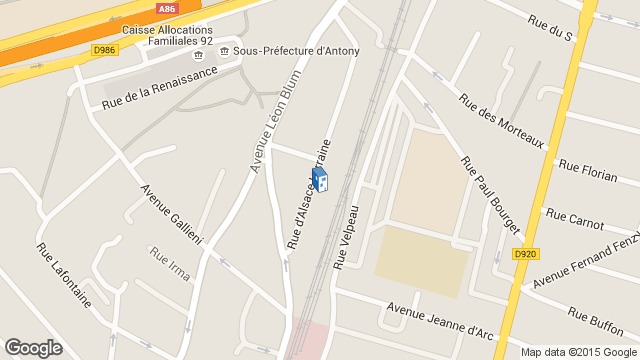 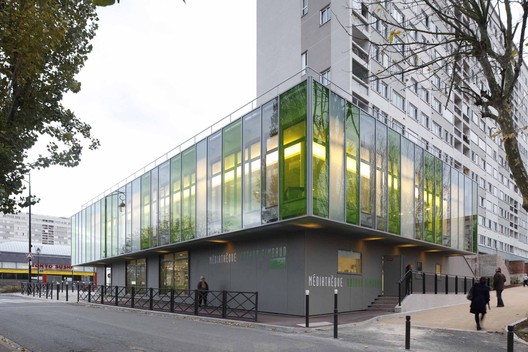