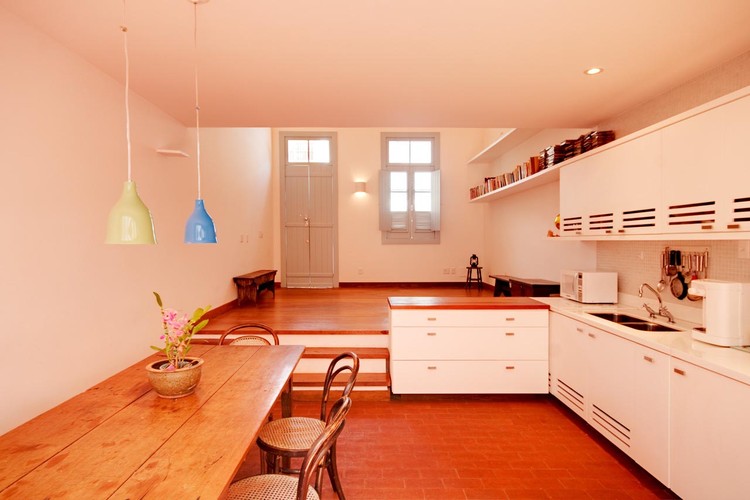 Text description provided by the architects. The project is for the home of a young couple, in a terraced house constructed in the beginning of the 20th century, in Jardim Botanico, Rio de Janeiro, and aims at establishing harmony among the existing set, the interventions made, and the environment, preserving the guidelines of its historical heritage. The goal was to fulfill the needs of its future residents. The factory-hand terraced houses form a set of 8 houses with practically the same kind of occupation of the allotment and dimensions of . It is a preserved area by the historical heritage, and definitions draw the guidelines for the project. Firstly, the volumetric analysis and characteristics of the existing set of houses should be maintained, formed by the main façade towards the street , the roof in ceramic tile, and the internal façade .

Furthermore, the guidelines for occupation of the allotment establish that: if there is forecast of a new floor within the original set, the paving-stone has to follow a minimum distance of the main façade; a non-constructed area corresponding to 20% of the total allotment shall be maintained; and, if there is a new structure, it shall be apart from the original set.

As of these conditions, it was possible to establish the premises for space distribution, in order to obtain a better relation among all ambiences of the house. This insight becomes clearer through the diagram beside, where darker areas represent horizontal closings and vertical of each floor, and lighter areas represent the voids, interconnected by the floors .

This reading, which primarily conveys the idea of a division in four linear-shaped almost equal squares, in fact represents a greater integration among ambiences, mainly shown by the voids created. There is a gradual occupation of the spaces, in each floor, where the ground floor bears a bigger area of occupancy, which becomes smaller throughout the other two floors; the idea was that the voids become present without having a physical and limited definition of each space. Spaces are defined by voids, as in the double-height of the living room, going over to the mezzanine, as in the prism of the inner courtyard, which relates to all ambiences, even if non-edified areas; the void space enables the insight that there is, in fact, the occupation of these areas, evidencing their interconnection. This is shown in closings used and in the opening of windows and doors facing voids, as the master bedroom window, opening towards the emptiness of the living room, and the windows and doors to the inner courtyard, dynamically allowing a significant diversity of the relation and occupation of ambiences. This continuity occurs even when there is partial delimitation of ambiences, either by the small difference in levels, as in going from the living room to the pantry, or by the change of materials.

The first floor houses the social area. As we enter the house, inside the original construction, we see a large room housing the living room and the dining room, connected to the kitchen. The difference of levels, both in floor and ceiling, with a double-height ceiling, and the living room lower and under the mezzanine, delimitates the use of these two ambiences, although preserving the space continuity. In the back of the first floor, there is a new structure thought to fulfill the wishes of the residents - the TV room. Between the two constructions there is an inner courtyard with retractile screen, interconnecting the pavements and the two blocks: the stairs and the catwalk. The courtyard stands between the two volumes allowing their integration, enabling a greater diversity of uses for the area. The regard for thermal convenience was also a determining factor to place the courtyard in the middle, thus allowing better airing, besides serving as source of natural light for all ambiences.

The second floor, with intimate ambiences of the house, shelters the master bedroom, erected in the mezzanine, in the original volume, and the home-office, in the back. Both rooms with floor-to-ceiling doors and windows, facing the courtyard, and the master bedroom also bears a window facing the living-room double-height ceiling.

The terrace, in the new construction, houses some elements of infrastructure, being also a great leisure area, enabling the enjoyment of the beautiful surroundings shaped by the Botanical Garden and by Christ the Redeemer. 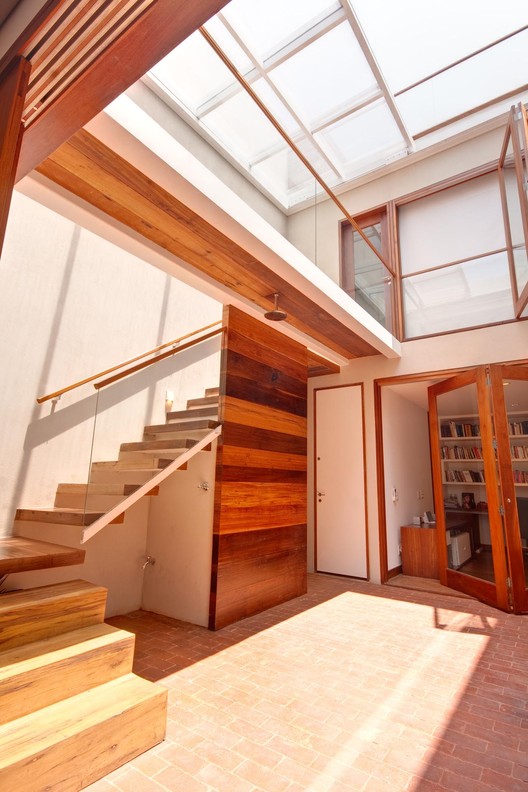