Wingårdhs: The Latest Architecture and News

One of Sweden’s most esteemed living architects, Gert Wingårdh (born 26 April 1951) brought Swedish architecture out of the tradition of the International Style and into contemporary times with his playful design spirit and love of eye-catching materials. With his use of bright colors and geometric motifs, his recent buildings have been described as "Maximalist" or "Modern Baroque." 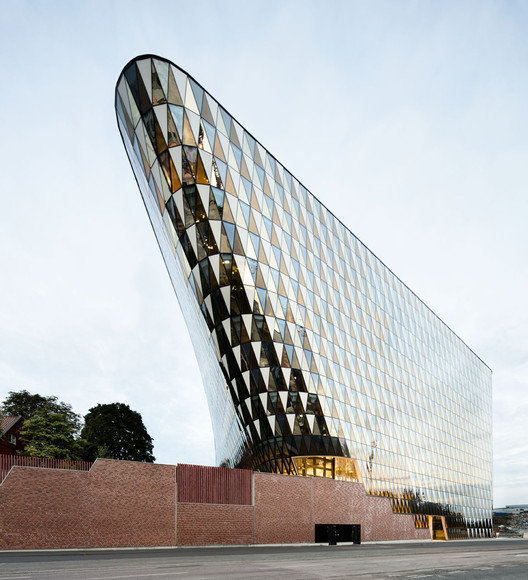 Earlier this month The Guardian reported that the King of Sweden, Carl XVI Gustav, has denounced David Chipperfield's designs for Stockholm's new Nobel Center (Nobelhuset) in the Dagens Nyheter (DN), a national Swedish newspaper, as both too volumetrically large and badly sited. The practice's initial proposal, which was lauded by the awarding jury for its “lightness and openness,” is a glass and stone structure which attempts to “convey dignity” and embody the ideals of the Nobel Prize.

A jury of seven, consisting of three architects and four Statoil employees, unanimously chose Wingårdhs' design proposal—dubbed "E=mc2"—for the company's campus at Forus West in Norway. Four other firms were shortlisted along with Wingårdhs: Foster + Partners (UK) together with Space Group (Norway), OMA (the Netherlands), Snøhetta (Norway) and Helen & Hard (Norway) together with SAHAA (Norway). OMA, however, pulled out of the competition before the final submission.

The competition consisted of a proposal for an office building for 3500 work places and a masterplan for the entire Statoil property at Forus West. Wingårdhs' design features an elliptical, chamfered building that tapers to 16 stories, set within a masterplan that will give the company a high degree of flexibility for future development. Statoil announced on Thursday that "The jury sees the potential for [E=mc2"] to be a distinct identity carrier for Statoil, which will both strengthen the Forus area and give Statoil employees pride and inspiration. The project has a significant innovative nature through advanced technological solutions, which fits well with Statoil as a leading technology company. Its clear inclined surface towards the sun is suitable for Statoil's energy and environmental ambitions."

More information about Wingårdhs' winning proposal and images of the other teams' proposals can be found after the break.

Norwegian energy corporation Statoil has revealed proposals for a new corporate headquarters from the five architecture firms that were shortlisted last October: OMA, Foster + Partners with Space Group, Snøhetta, Wingårdhs, and Helen & Hard with SAAHA. The competition--announced in September of 2013--called for a project that would "take into consideration a number of new measures in the region regarding public transport, parking, roads and other types of infrastructure." The winner will be announced in April/May.

Statoil hasn't disclosed which project belongs to which firm, but the ArchDaily editors have had some fun trying to put a name to each model. What do you think? Let us know your guesses in the comments!