Frei Otto: Spanning the Future, a documentary focusing on the life and work of 2015 Pritzker Prize winner, Frei Otto, has finished production and will be screened at various venues during the course of 2016. The film features one of the last interviews Otto gave before his death, in addition to commentary from renowned architects and engineers, including Zaha Hadid and Jürgen Hennicke, on the importance of his work. In the film, Otto discusses the influences on his work and his approaches on form finding and the development of tensile structures.

In their notes on the selection of Frei Otto as the 2015 Pritzker Prize Laureate, the jury described him as an architect that took his work beyond the boundaries of the discipline, as an architect who was also a “researcher, inventor, form-finder, engineer, builder, teacher, collaborator, environmentalist, [and] humanist.”

To learn more about Otto’s multidisciplinary approach to architecture as well as his emphasis on experimentation, we turned to an interview he did with Juan María Songel in 2004, published in the book A Conversation with Frei Otto. In the interview, Otto discusses numerous topics of interest and relevance to architecture in the 21st century, and in particular the importance of experimentation and research, declaring: “Productive research must be brave!”

“The computer can only calculate what is already conceptually inside of it; you can only find what you look for in computers. Nevertheless, you can find what you haven’t searched for with free experimentation.” - From A Conversation with Frei Otto, by Juan Maria Songel

For Frei Otto, experimentation with models and maquettes was a fundamental part of his work as an architect. In 1961, he began to conduct a series of experiments with soap bubbles (featured in the video above). His experiments centered on suspending soap film and dropping a looped string into it to form a perfect circle. By then trying to pull the string out a minimal surface was created. It was these created surfaces that Otto experimented with.

Through these types of experimentation he was able to build forms and structures that were previously believed to be impossible. “Now it can be calculated, but for more than 40 years it was impossible to calculate it. I have not waited for it to be calculated in order to build it.” 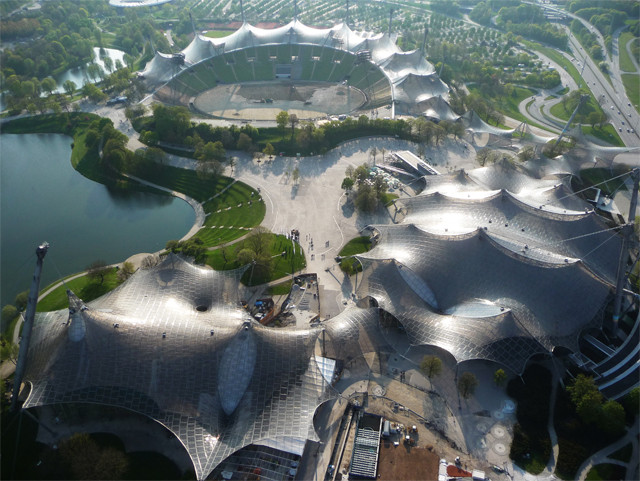 Last night German architect Frei Otto was selected as the 2015 Pritzker Prize Laureate, the second German to win the award and the first to receive the award posthumously. The video above shows the impressive construction process of Otto’s German Pavilion at the 1967 International and Universal Exposition in Montreal (although unfortunately without sound).

Covering an area of 8,000 square meters, the pavilion featured a large, steel mesh web suspended over eight steel masts, which were located at irregular intervals and supported by anchored cables located outside of the structure.  A transparent polyester fabric was then placed over the mesh roof, creating a tent.  The whole construction took only six weeks.