The Swiss-born artist Paul Klee lived between 1879 and 1940, and was a noted Bauhaus lecturer who experimented deeply in color theory. His vibrant, mechanical sketches which formed the basis for his Bauhaus teaching throughout the 1920s, have now been made freely accessible online after the Zentrum Paul Klee published almost all 3900 pages of his personal notebooks. 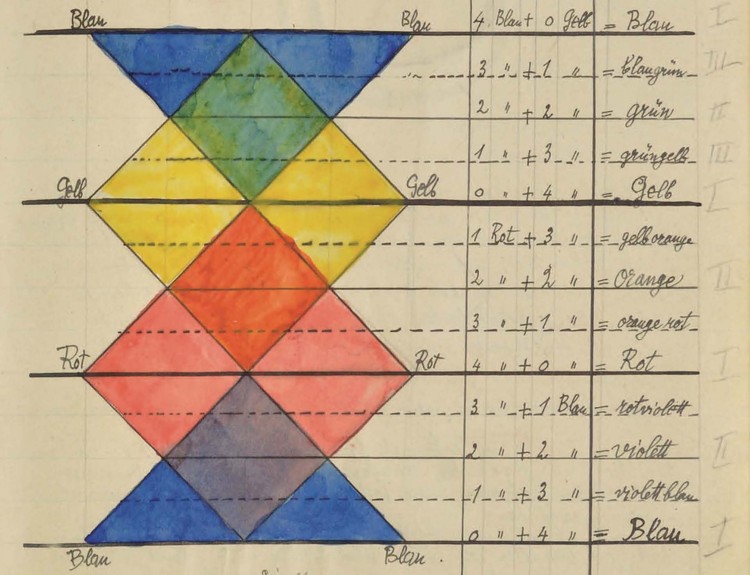 Last year Monoskop delighted the architecture and art community by making many of the Bauhaus publications available to freely download. As a perennial fan of all types of architecture communication, I had previously written about the exceptional qualities of Bauhaus-produced books and journals and how these visual teaching tools ultimately influenced more recent, canonical publications. Below we share an edited excerpt from “Architects’ Books: Le Corbusier and The Bauhaus,” a chapter from the larger research project, Redefining The Monograph: The Publications of OMA and Rem Koolhaas.

As the Bauhaus operated in a generally experimental and revolutionary status, the information taught was not unified in any particularly accessible form. The Bauhausbücher were produced in order to expose the elements of the Bauhaus education to the original, small student body. These books later proved invaluable when the school was closed by the National Socialist Government in 1933, their contents holding authentic records of Bauhaus education. Merging theory and practice, the books, designed by Moholy-Nagy, are a testament to his creative ideas. He saw traditional forms of information dissemination as supplying information to students without stressing the relevance and relationship to the world in which they were living. His books sought to clarify these relationships through stimulating images and insightful (though at times lengthy and ethereal) text.