Garage Museum of Contemporary Art: The Latest Architecture and News

The Garage Museum of Contemporary Art in Moscow, Russia has announced the construction of the Hexagon pavilion by SANAA (Sejima and Nishizawa and Associates). The major architectural project will increase the museum’s physical footprint through the reconstruction of the Hexagon pavilion adjacent to its current home in Gorky Park, and will include a new public courtyard, exhibition spaces, and café, all designed around the "organics of presence, loyalty to the principles of sustainable consumption, and the creation of an accessible environment". 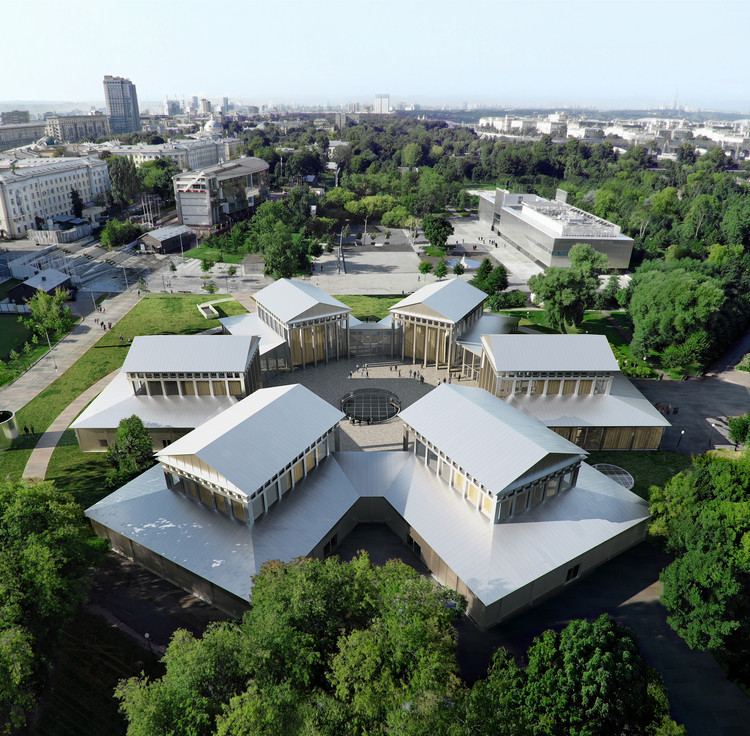 The Garage Museum of Contemporary Art has announced the winning design for the 2022 summer cinema. Selected from 118 applications, the proposal created by Moscow-based practice LIPMAN ARCHITECTS features gabion walls filled with plastic water bottles, inviting conversation around topics such as material recycling and the environmental impact of temporary architecture. 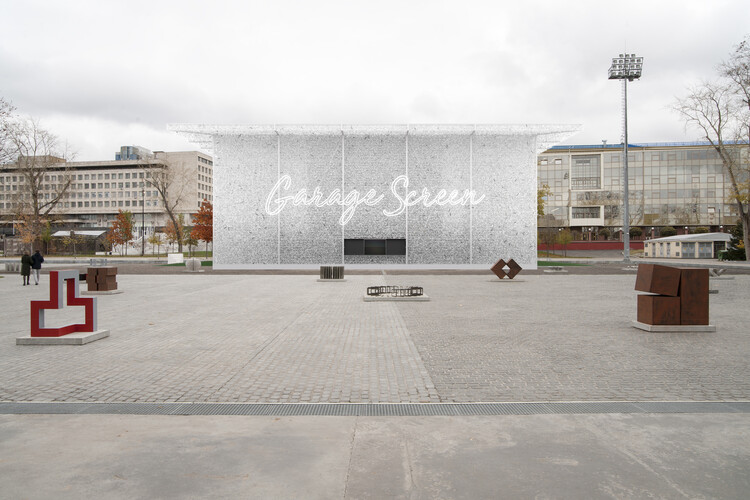 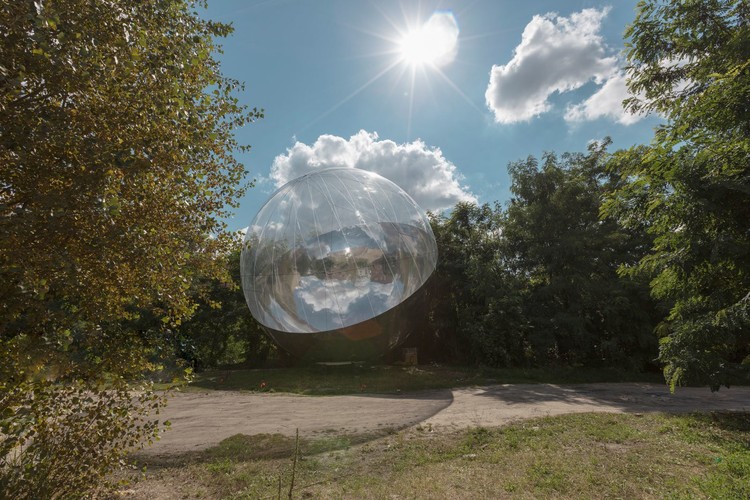 The new Garage Screen cinema designed by SNKH Architects was just unveiled in Moscow. The winning project of the second Garage museum of contemporary art competition for the design of a pop-up summer cinema “resembles an inverted Bedouin tent”. Selected out of 136 submissions from Armenia, Belarus, Kazakhstan, Kyrgyzstan, and Russia, the intervention is not instantly recognizable as a cinema, reinventing the usual design. 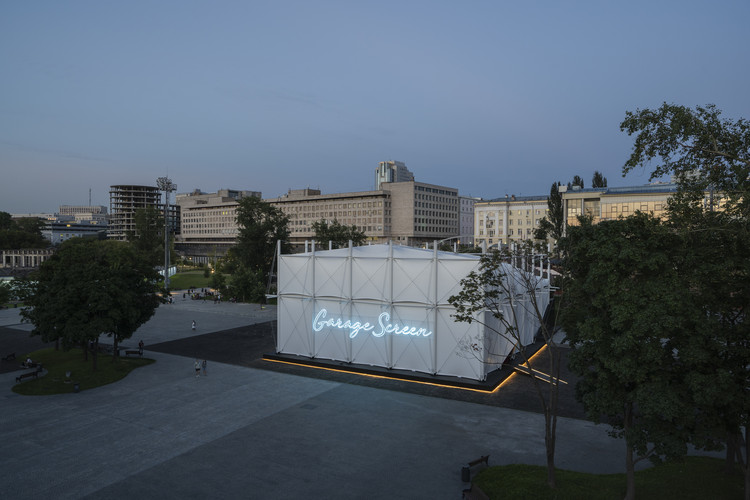 SNKH studio from Yerevan has been selected to design the Garage Screen summer cinema for the Garage Museum of Contemporary Art in Moscow, Russia. The museum invited promising architecture firms to present their vision of temporary architecture and expanded the geographical reach of the competition to include Russia, Armenia, Belarus, Kazakhstan, and Kirgizstan. 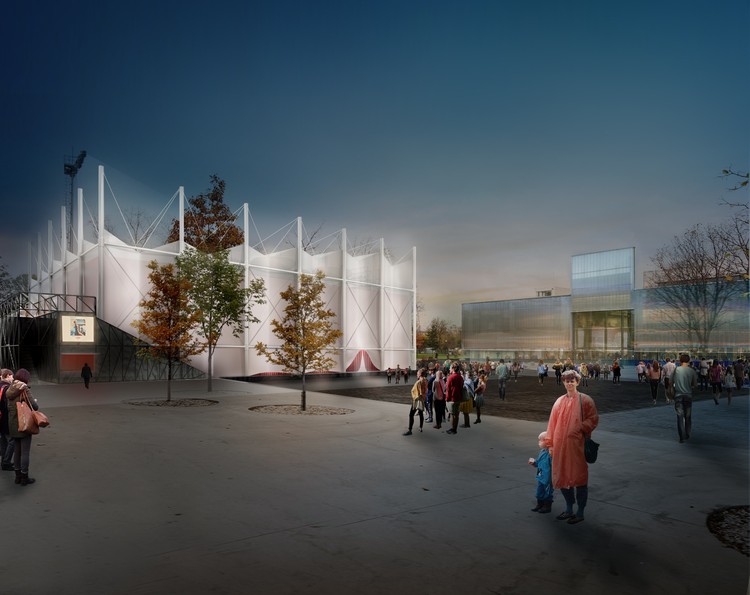 Garage Museum of Contemporary Art announces the second competition for the development of conceptual designs for 2020’s Garage Screen, a summer cinema located on Garage Square in front of the Museum. The competition’s goal is to provide architectural bureaus with an opportunity to submit their vision of a temporary pavilion to be installed in Gorky Park from spring to fall 2020. Applications will be accepted from 22 July through 16 August 2019.

The inaugural competition, held in the beginning of 2019, gathered over 130 applications from 24 Russian cities. Its geography and number of participants confirmed the importance of such 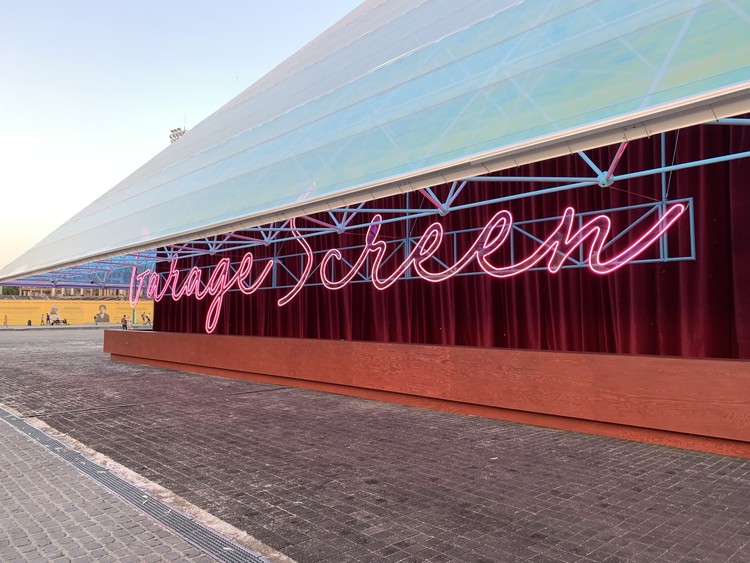 This article was originally published on Strelka Magazine.

This year’s Garage Screen summer cinema has been unveiled. The structure, located in front of the Garage Museum of Contemporary Art in Moscow, is the result of an architectural competition organized by the museum and Strelka KB.

Resembling a flat-topped pyramid, the SYNDICATE architects-designed pop-up cinema invites viewers to watch films in a highly unique space in the middle of Gorky Park. While the structure is without walls, red velvet curtains create the illusion of a cozy, enclosed chamber where movie-goers can relax and allow themselves to get lost in the plot.

Holographic Pyramid Coming to the Garage Museum in Moscow

A holographic pyramid by SYNDICATE Architects has been selected as the winner of the Garage Museum of Contemporary Art's Summer Cinema Pavilion competition. The project was selected from six shortlisted competitors, and the competition organized by Strelka KB offered up-and-coming Russian architects the opportunity to design a multi-functional temporary pavilion that would be accessible and meet the museum’s standards of environmental responsibility. 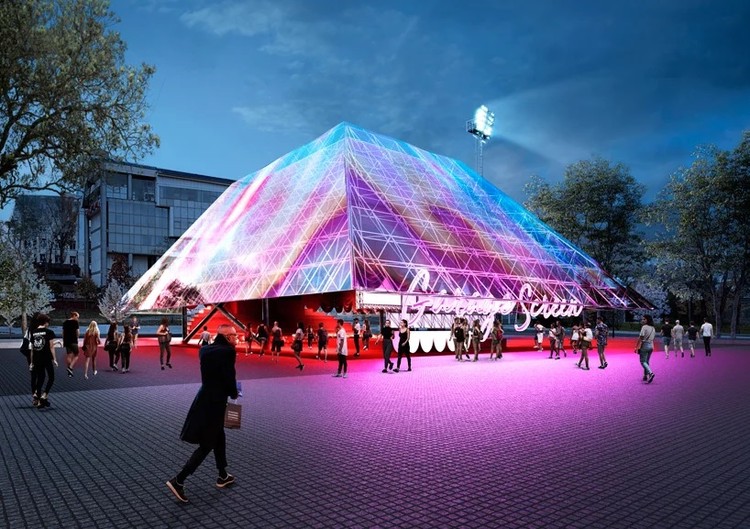 The Museum of Contemporary Art San Diego recently released plans to begin demolition on a portion of its La Jolla building designed by Robert Venturi and Denise Scott Brown. Aiming to expand and renovate, the museum is facing mounting criticism from a range of architects, critics and historians. The new plan calls for Venturi Scott Brown's exterior colonnade into Axline Court to be removed, and for the museum's neon-accented entry atrium to be repurposed as a public gathering space. With a part of the colonnade already removed, critics have signed an open letter hoping to save VSB's work. 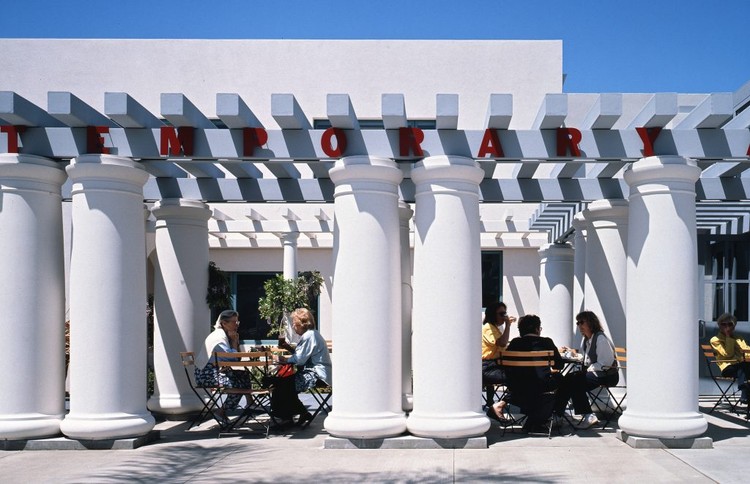 Photographer Laurian Ghinitoiu has shared with us images of OMA's recently completed Garage Museum of Contemporary Art in Moscow. The museum project repurposed the 1960s Vremena Goda restaurant in Gorky Central Park and transformed it into a modern exhibition space adorned with Soviet era tiles, mosaics and bricks preserved from its previous life.

"The building offers a wide range of interior conditions for the exhibition of art beyond the ubiquitous “white cube,” described OMA in the project's description. Scroll down for more images of the museum by Ghinitoiu. 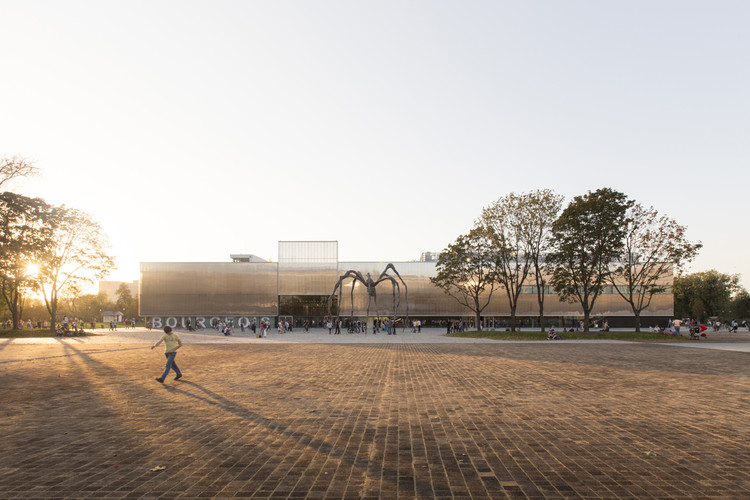 Rem Koolhaas and art philanthropist Dasha Zhukova will be gracing the WSJ. Magazine’s February cover as “art partners” embarking on a transformation that will turn a ruined Brezhnev-era Communist landmark - the Vremena Goda in Moscow’s Gorky Park - into the Garage Museum of Contemporary Art’s new home. “The building is basically a found object,” said Koolhaas, regarding his “raw” design and intent to preserve the structure’s decay. “We are embracing it as it is.”