Cardboard: The Latest Architecture and News 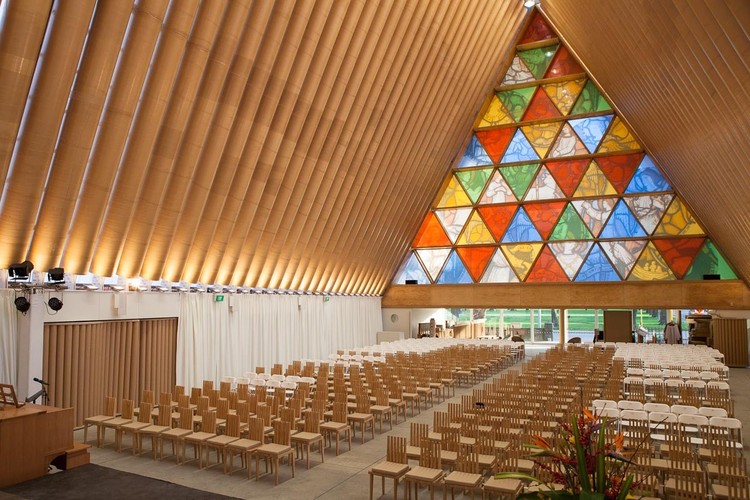 FAB FEST is a week-long celebration of design and making, hosted by the Fabrication Lab at the University of Westminster. For the third year running, it invites creative designers from around the world to envision and build their ideas about architecture and the city. It will feature over 80 pavilions and installations designed internationally, manufactured in the Fabrication Lab, and assembled and installed in Central London.

Designed and developed by Fiction Factory, a company of creative makers from Amsterdam, Wikkelhouse loosely translates to ‘wrapped house.' This sustainable modular house is uniquely created with cardboard as its main building material and is customizable in its size and function. 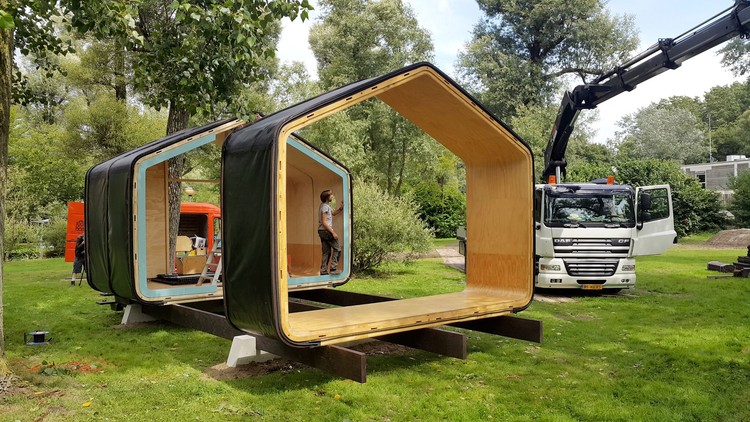 Quirky, innovative and visceral, Get High without Drugs was awarded first place in the fabrication category at this year’s International FAB FEST* in London.

Mollusk-like and mysterious from the outside, the form of the pavilion emerges from the combination of a zonohedron and a dome. Seventy-two hexagonal surfaces were formulated into fold-able nets that could then be digitally fabricated from flat-sheets and assembled into load-bearing modules. A puzzle-like routine drove the assembly of the modules into the pavilion’s dome-like form. 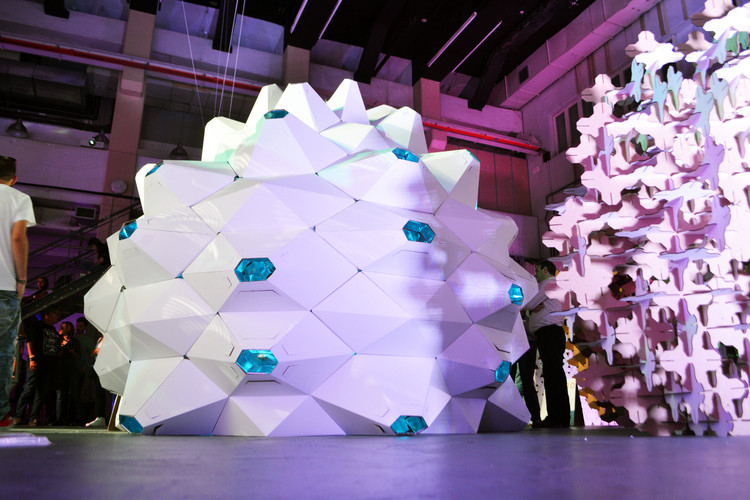 Ten third-year furniture design students from Finland's Lahti University of Applied Sciences - Institute of Design, created temporary living solutions using only plywood and corrugated cardboard. Low cost, quick and easy fabrication, with no tools necessary: Rehome is a solution for recent catastrophes, such as natural disasters and the ongoing refugee crisis, which leave many people displaced from their homes. 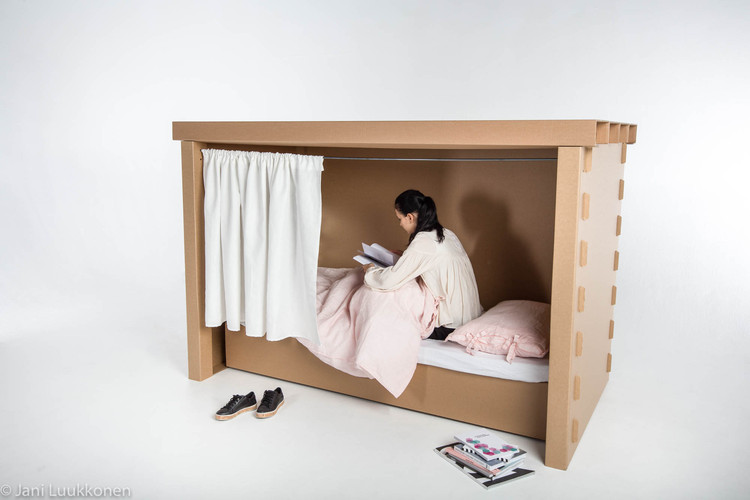 In architectural offices, the cardboard tubes used in large-format rolls of paper seem to multiply at an alarming rate, populating every nook and cranny until they fill the rafters. The team at Perkins + Will Boston have invented a cheeky solution to stem cardboard tube proliferation in the form of a privacy screen that behaves simultaneously as a sound and visual barrier, and as a storage space. Composed of dozens of reclaimed cardboard tubes fitted into a CAD-mapped and cut plywood frame, the 'wall' provides ample opportunities for drawing storage, sunlight mitigation, and playful interaction without disrupting workflow. 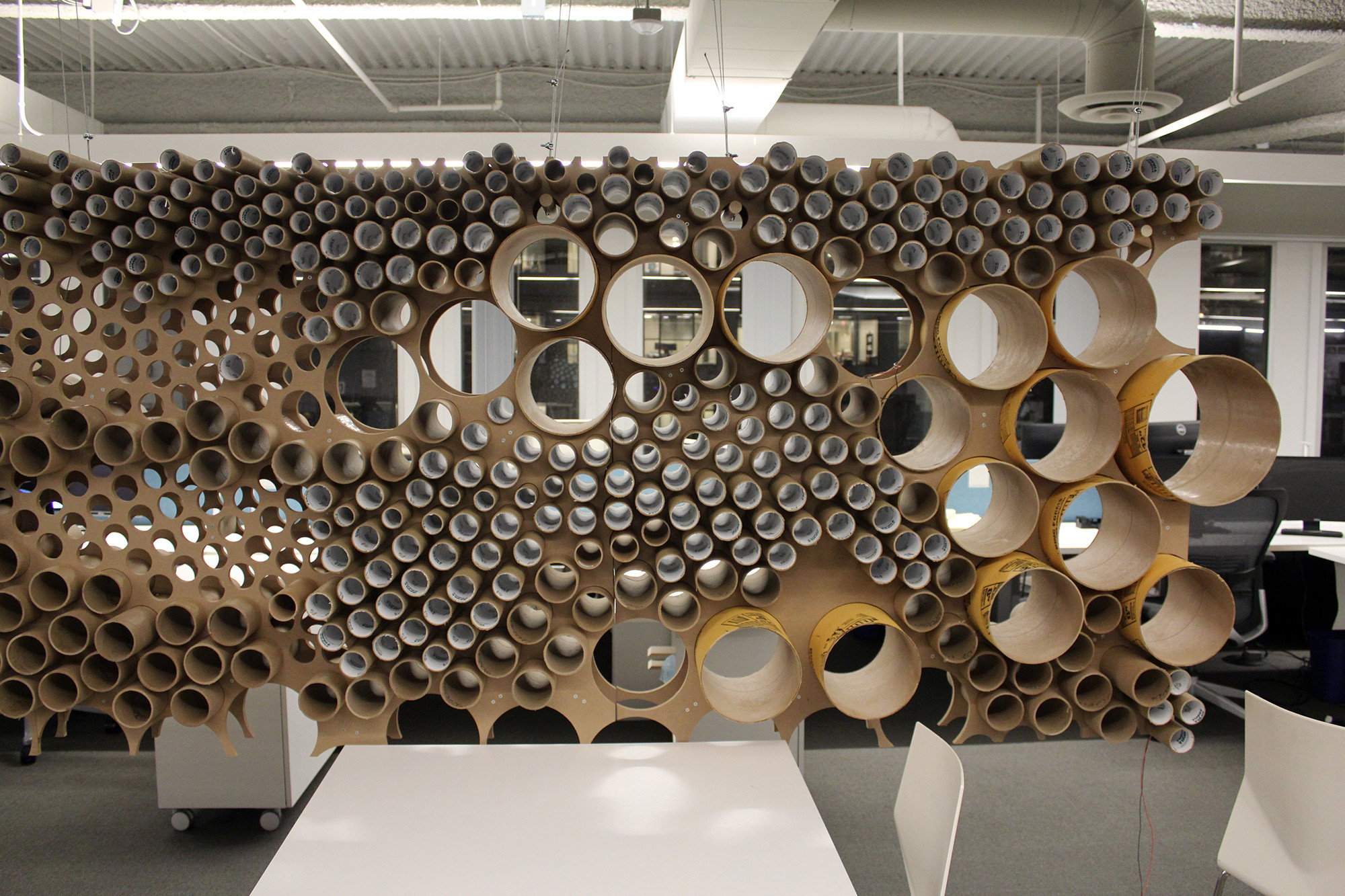 Shigeru Ban’s Cardboard Cathedral is officially open to the public, just over two years after the crippling 6.3 magnitude earthquake ravished the New Zealand town of Christchurch. With an expected lifespan of 50 years, the temporary cathedral will serve as a replacement for the city’s iconic 1864 Anglican cathedral - one of Christchurch’s most prized landmarks - until a more permanent structure is built.

Disappointed that most architecture is built for the privileged, rather than society, Shigeru Ban has dedicated much of his career to building affordable, livable and safe emergency shelters for post-disaster areas. As described by TED:

Long before sustainability became a buzzword, architect Shigeru Ban had begun his experiments with ecologically-sound building materials such as cardboard tubes and paper. His remarkable structures are often intended as temporary housing, designed to help the dispossessed in disaster-struck nations such as Haiti, Rwanda, or Japan. Yet equally often the buildings remain a beloved part of the landscape long after they have served their intended purpose.

Each year UdK Berlin organizes a small competition among the students for the concept of a Bookshop inside the School. This year’s winning proposal for the shop was designed by Dalia Butvidaite, Leonard Steidle, Johannes Drechsler and the all participating students then helped manufacturing the structure.

Cardboard as the main material was chosen because of its flexibility in shape, stability, cheapness, temporary feeling, lightness, mobility and last but not least its recyclability.