Save
Domain House / IN STUDIO 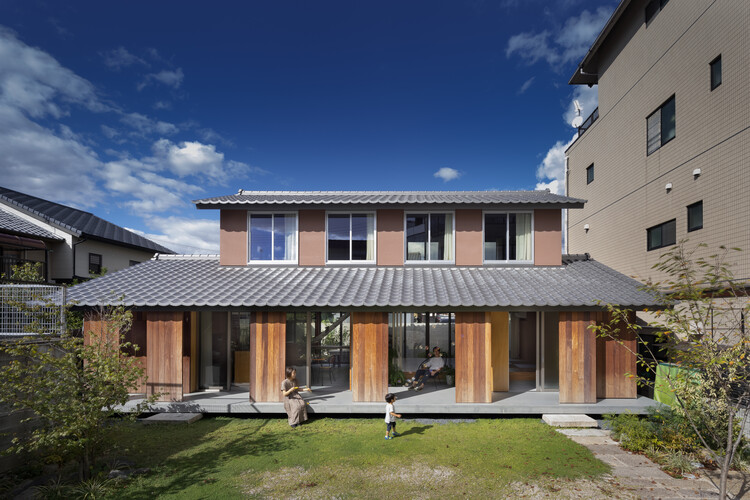 Text description provided by the architects. There was a piece of land in the Rakuhoku district of Kyoto City that had been lived in from generation to generation since the late Edo period. Each family member built a house and a place of work on the land, and they lived together and apart from each other. Although there are now institutional boundaries of ownership, until recently, people crossed the boundaries of the land and came and went as needed, and in reality, the boundaries were loose. In terms of the length of time spent here, the house is ephemeral and the land is permanent, so when you live here, you will feel like living in the land as well as in the house. The two houses and the workshop on this land were to be demolished to make way for a single house.

When building a house here, it was not considered appropriate to use the form of a modern mass-produced house. Because in modern times, private property and individualism based on modern law have been implemented, and the house, which serves as a castle for one family, is built in a form that encloses the land with a wall and gate, and the living space with an exterior wall and entrance door, separating the city from the living space and ensuring a world limited to each family member. However, since the land still retains the loose boundaries of the pre-modern era before modern law, it seemed better to reconsider the housing form by going back a little further in time than the modern era. Rather than a house that is cut off from the rest of the world by solid boundaries, it is possible to create a territorial house that expands consciousness and is rooted in the world.

This housing project required privacy and light. If we were to translate these into space, we would have to provide solid exterior and interior walls, appropriately sized windows in the right orientation, and a well-lit interior, as is standard in today's mass-produced housing. Here, however, it seemed desirable to balance these two opposites by reading "privacy and lightness" as "spaciousness and openness. It is not a newly developed small plot of land, but a large plot of land in the context of the city and its relatives, that offers the possibility of creating a house with a sense of territory and openness.

In order to create an area for living, I raised the soil along the roadside, created an earthen floor floating above the land, and hung a peeled ceiling. The embankment creates a distance from the city, while still being connected to it. The floating earthen floor is a member of the ground as a material, but its floating contour creates an area distanced from the ground. The mukuri ceiling extends outward and creates an area that envelops the interior. The floor and eaves are set back from the ground to create an uneven glass surface, and part of the interior has a raised floor with wooden planks and tatami mats. In this way, private areas are created in stages from the heart of the house to the city and then opened up in stages.

In addition, the volume, fixtures, and trees are arranged to support the daily life of the residents. The volume includes housing equipment, storage, and bearing walls. The upper floor is also part of the volume and contains the most private bedroom. Fixtures are located around the eaves, floor, and tatami room to regulate privacy, sunlight, and wind. Trees control the line of sight between the interior and exterior and reflect the seasons on the land.

In terms of technique, the composition of the embankment, trees, earthen floor, raised floor, and fittings is an old method found in gardens, temples, shrines, and medieval houses, while the manipulation of form in section and the arrangement of discrete elements on the plane are modern methods. In other words, it selectively distances itself from or inserts itself into both the past and the present. In terms of the environment, while ensuring minimal boundaries such as the natural environment and property, the artist has created an area that is broadly perceptible and comfortable to live in. It is not confined by the boundaries drawn by modern and contemporary institutions, nor is it overly open in opposition to them; it is in these subjectively created areas that people should live.