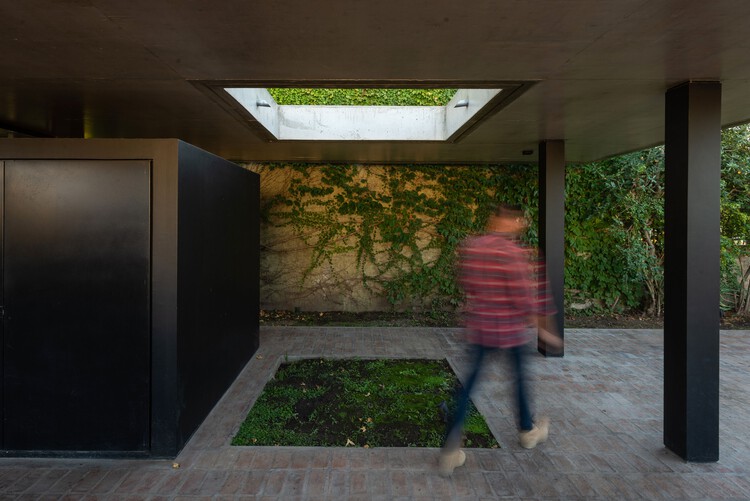 Text description provided by the architects. The house is located in the town of Gonnet, a suburban area of the city of La Plata, a site in which low-rise buildings predominate, mostly single-family hoses, surrounded by abundant vegetation and outdoor spaces. The house is built on a lot between party walls of 10m x 50m where its front faces north. As a particularity, one of the sides is not fully consolidated, instead there is a swimming pool on the adjoining lot (owned by a relative of the client), responsible for completing said "limit".

The use of the water mirror for recreation for both families was one of the proposed conditions of the project and became one of the main axes in the design of the house. On the other hand, the flexibility of uses, such as the relationship with the outdoor space, was another issue that we had to address. With these premises, the project was developed on two levels where in the first 20 meters of the lot the house consists of only the ground floor, so as not to take away the afternoon sun from the pool. Here we find the spaces of the kitchen, laundry, toilet and semi-covered spaces that serve both as a garage, as well as sun protection and recreation.

The core of services was located in such a way that it generates a private patio on one of the dividing walls (allowing sunlight to enter the kitchen and the social space) and on the other a route that guides us to the entrance of the house and its most public sector, while responding to the existing vegetation; a large tree and a climbing plant on the wall. The private sector of the bedrooms, office and bathrooms is located on the upper floor, a space from which it is possible to observe the entrance route accompanied by its aforementioned vegetation. On the other hand, all the bedrooms have views to the green spaces, the suite to the front and the rest to the back of the lot. One of the rooms is directly related to a void that runs vertically through the house in the semi-covered sector, connected to the barbecue area.

In search of a pure and simple aesthetic, the house was materialized in such a way that the reinforced concrete structure was visible, and where the design and distribution of the spaces was carried out following the modulation of the phenolics and the lines that these left. This allowed us not only to have less exterior maintenance and waste, but also a spatial fluidity and relationship of the interior space with the surrounding vegetation.

To respond to the orientation and privacy of the bedrooms, it was decided to place large reinforced concrete planters with plants and sliding metal lattices, which served to filter sunlight and visuals towards the interior of the private upper floor.