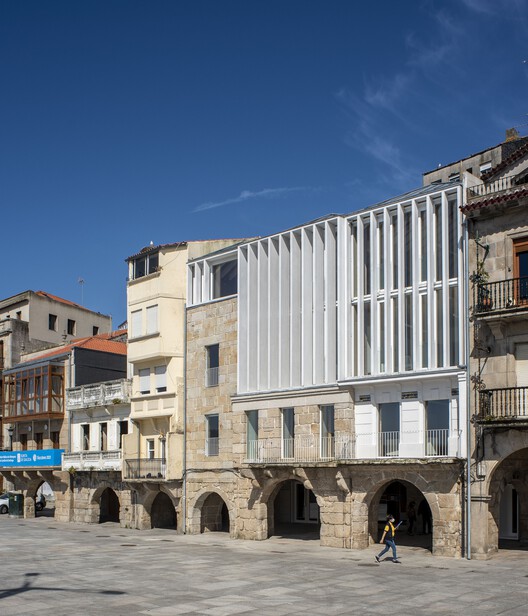 Text description provided by the architects. The main campus of the University of Vigo is 10km from the urban center, and with the purpose of expanding its activity, the institution decided to refurbish three buildings in the city.

A wood volume rests on the stone supports, which are the only existing remains, preserving part of the facades and dividing walls of the old constructions. The wood box is entirely wooden, structure and construction included, but with industrialized systems that optimize the use of the material and its performance over time. The project is inspired by traditional shipbuilding, incorporating the latest R&D advances, as corresponds to the building´s use.

The choice of material and its construction system was chosen to help blend the building with the local tradition without giving up a certain dose of contemporaneity. The porticoes and sections of the stone façade are restored on the western front. The arches support the new construction, whose foundation is completed with micro piles along the central area, a stone lab on part of the perimeter, and rock directly at the rear. Before the port infills the terrain was right by the sea, so it is geologically complex.

Three criteria guide the intervention on the facades, taking the original ones as reference. The northern one is reconfigured, reusing its own stones, to adapt an existing attic.

The central one is reinforced and completed with a new stone cornice similar to the existing one. And in the last one, the plasters are restored with tile insertions.

The permitted height is completed with a latticework of laminated timber columns that includes structure and sun protection with the vertically suggested by the regulations and the image of an institutional building.

The east façade, located between small squares, courtyards, and alleys, is similarly resolved and made lighter by the reduction of solar impact. The planned volume is achieved by rounding off the complex with three zinc hip roofs, pierced by two skylights that fill the interior with northern light.

The functional program is flexible, with spaces for work, meetings, exhibitions, etc, arranged over two levels. Of the old plot arrangement, whose footprint it preserves, the smaller volume houses servicing spaces: listed staircase, restrooms, facilities on the top floor, but also a meeting room on each of the upper floors.

The rest is distributed in the other two volumes, with an institutional area on the main façade of the first floor and classrooms on the second one.