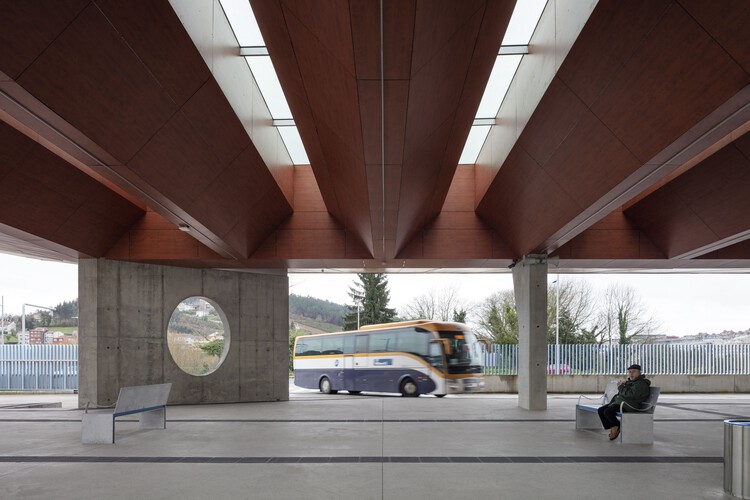 Text description provided by the architects. The arrival of High Speed to the city has been accompanied by the transformation of the current railway station into an intermodal station, fast becoming the central node of public transport in the city and its area of influence, by offering the user the possibility of combining different modes of public transport (rail and bus) quickly and efficiently at a location very close to the city Centre.

Building on the edge of the city – relationship with the immediate and distant surroundings. The new bus terminal has contributed to reconfiguring the urban fringe that borders the lowlands of the Sar River. This condition of limit is linked to the possibility of transforming the building into a viewpoint over its immediate surroundings, Las Brañas and la Colegiata del Sar, and in the distance, the City of Culture.

The structure is concentrated in the central area of the building to avoid interference with the bus loading bays, facilitating the movement of vehicles and people. On both sides, there are two large overhangs that cover the loading bays from inclement weather.

This same geometry is reproduced in the covering of the upper floor, but this time the upper plane is inclined to help adapt its scale to the different characteristics of its surroundings, with a greater height towards the track yard and platforms, a volume more controlled towards the edge of the city and the park, protecting the waiting and standing spaces. This change of scale also makes it possible to differentiate the uses that are arranged on both sides of the entrance hall. To the south, a large terrace to which the cafeteria opens is enjoyed by both users and residents of Santiago. To the north, the services are grouped into low bodies that protrude from the perimeter glass enclosure.

The internal organization of the bus terminal. The bus terminal is organized on two superimposed floors, on the lower one, there is the area of the loading bays and the vehicle circulation and maneuvering lanes, on the upper one there is the building that houses the necessary services to attend to passengers.

Sustainability - Passive Systems. The large roof plane is perforated by longitudinal skylights that guarantee that natural light reaches all interior spaces. The extension of the roof avoids direct solar radiation inside the terminal, avoiding the need to resort to the use of the planned air conditioning systems on many days a year. For heat production, a biomass boiler is used.

The structural overhang is extended by a light structure of metal profiles and an ETFE coating to improve protection against rain for users. 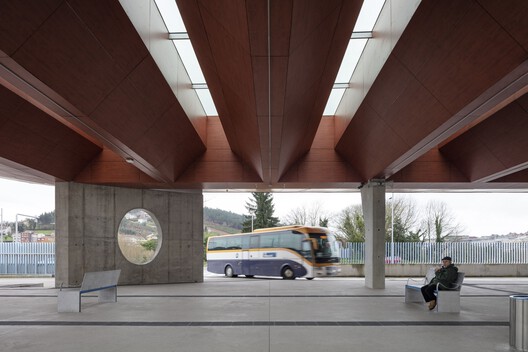