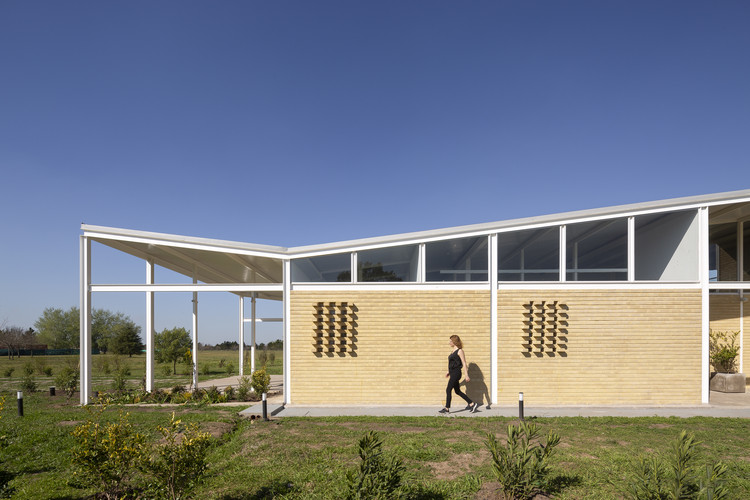 Text description provided by the architects. The project is located in a country club on Route 6, in the district of Marcos Paz, province of Buenos Aires. In a predominantly rural setting, the neighborhood takes the form of two leaf-shaped clusters, containing a large central park. Bordering on this void, at the end of the area, is the lot on which the house stands.

The orientations, as much as the semicircular shape of the property and its relative location in the neighborhood, define the implantation of the house. The favorable sun from the east also offers the best and most extensive views towards the central park, without interference. Consequently, the main functions of the house -the living room and the bedrooms- are located on this site. In contrast, the service areas are located to the west, filtering the afternoon sun and the views of the neighbors.

In this way, the longitudinal space is supported on the straight side of the lot with access from the north and ascending to the south, generating a second, more private, and contained floor to take advantage of the views from a higher level. The section and the material definition of the project end up establishing a large part of the imprint of the house.

Particularly in this project, the constructive logic arises from the outset, resulting in an opportunity to develop a system that combines noble, bare, low-maintenance materials that tolerate the execution of the work in successive stages. The result is a house that is defined by this material logic, both in its modules and in its facilities and equipment.

The exposed “Silma” brick solves the closed sides, filtering views of the service areas and diluting the open spaces, but without interfering with the sloping shape of the roof. That resulting triangular space is transparent, it is glazed, both inside and outside, giving lightness to the whole and multiplying the situations of light during the course of the day. The metallic structure of IPN and UPN tubes is always visible, structuring the project and characterizing it. The double metal sheet and thermopane polyurethane cover that allows maximizing insulation and execution times are also shown in its original expression. The walls to the east, also made of thermopanel, are amalgamated with aluminum carpentry that lightly resolves the enclosure on the wall.

In keeping with this logic, the section completes the design. A unique and pure volume with a folded roof that grants access through the lowest point after crossing a large semi-covered space, allowing the entire work to be perceived, the rising roof, the balcony, and the different situations of opacity and transparency. 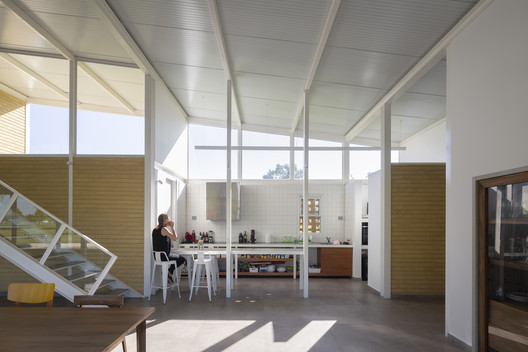 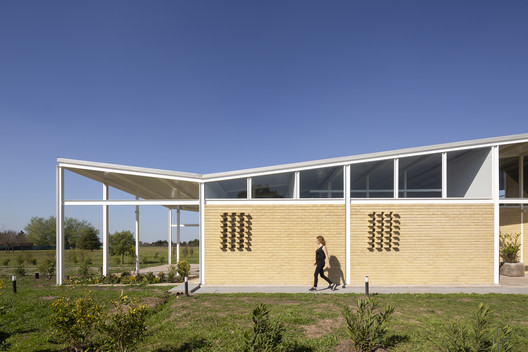