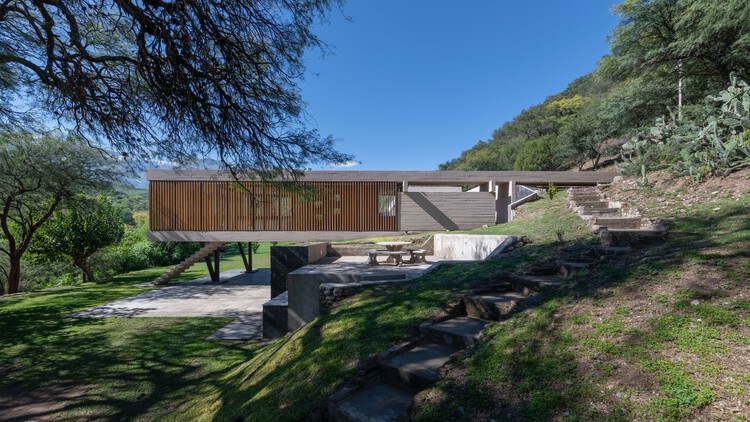 Text description provided by the architects. We were presented with a commission for a single-family home in the Traslasierra area in the province of Córdoba, Argentina. A very particular place with pleasant views, steep topography, and a fair degree of urban isolation, where getting there requires taking some precautions and the notion of neighbor is not present. The value of the site is nature, which has the leading role as soon as the paved road is abandoned. The work becomes present between the winding of the road, the mountain topography, and the vegetation. And as these factors progressively allow it, it begins to be discovered.

Once there, the work takes center stage on the scene for a moment, only to immediately return it. You can't compete with that environment. There the work is transformed into an observation platform that solemnizes the impressive views of the landscape and wildlife. The project defines the need to generate shelter and works on the construction logic that rethinks the economy, resources, human needs, and contained space. The work is a support of inhabiting and contemplation, the compositional synthesis had to be total. The structure supports the loads, defines the space, the uses, and the material expression, in collaboration with the wooden sieves, they condition and intend the sunlight and the visuals.

The definition of these factors is essentially defined by the beams that, due to their location and direction, determine circulation and permanence zones on the floor plan, as well as the definition of a public and a private space, intersecting. The result is a patio node between the public/private horizontally and the access and terrace/pool vertically. All these variables of use and space make it possible to inhabit in order to provide a gradual revelation of the architecture, giving framework and accent to the landscape. 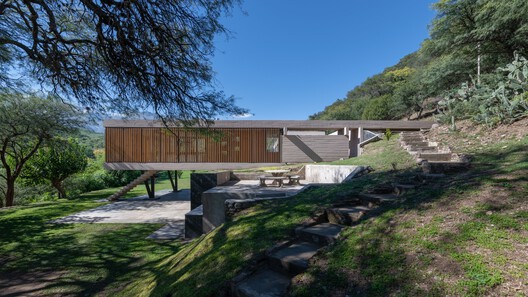