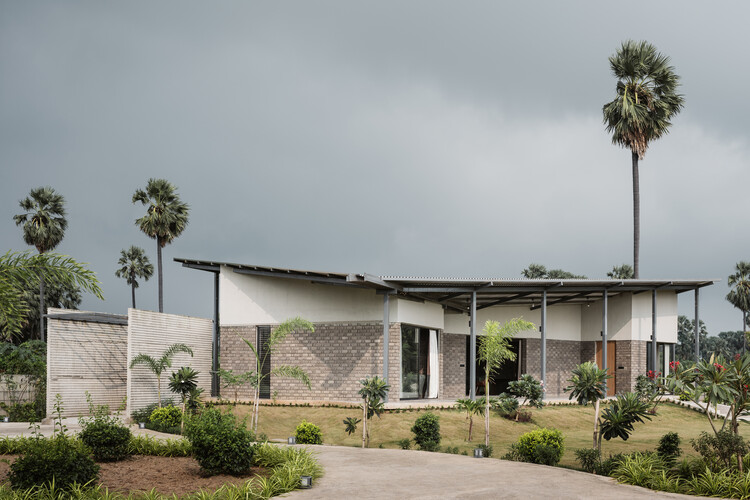 Text description provided by the architects. The site is situated in a small village, Bhata in the urban fringes of Surat city amidst the farmlands. The 1600 sq ft blocks are scattered and placed at angles in a linear orientation on a 3765 sq yard of land on the western side of the site leaving the lush green landscape to take over the eastern side. The project seeks to assemble and include the beautiful landscape as well as the client's needs, to summarize it in this architectural composition. “With this project, we have tried to achieve a contemporary idiom out of conventional materials.”

The landscaped entry pathway directs towards a textured concrete wall covered with metal pergolas, which enhances the path with the play of light and shadow. The entrance leads to the backside passage that allows varied vistas of the landscape each at a different angle. One can experience the beauty of the open landscape from the living space which is connected to the Otla. The interiors are proportionately humane that connect with the huger semi-open space which fronts the lush green garden.

The architectural planning and built form of the building are formularized with the placement of three distinct blocks, varying in dimensions connected by a common plinth and parabolic roof, giving it a monolithic elevational expression yet a functional separation in terms of utility. The three blocks distinctly function as individual units, one is a singular space for home theatre and family area, a living area in the central block, and utilitarian spaces in the third block.

An Otla space outside becomes an adjunct to the indoor family area which literally functions as the magnet of the house over-viewing the landscape, creating a simultaneity of vistas. The Otla space is a multifunctional center for activities and also provides a varied opportunity to observe and be amidst the developed landscape. The direct visual connection between the western and eastern side landscape is created through the central block while it is restricted through the other blocks which emphasize the living area and restricts the exhibition of private spaces.

The idea was to minimize openings towards the west and maximize them towards the eastern side allowing the morning sunlight to penetrate through. Allowing sunlight to interact with the inside to peruse the spaces during various times of the day as well as seasons, helps to create interaction between the built and the unbuilt.

The local and minimal material palette which includes Concrete, fly ash bricks and metal plays a vital role in the architectural expression of the structure. The composition of black cotton soil and fly ash was used for the bricks which were locally produced very near to the site. The parabolic roof is supported by a metal frame while the entire flooring is finished in IPS flooring. Evolved as a response to the context, the house is low maintenance and well-rooted to the site. 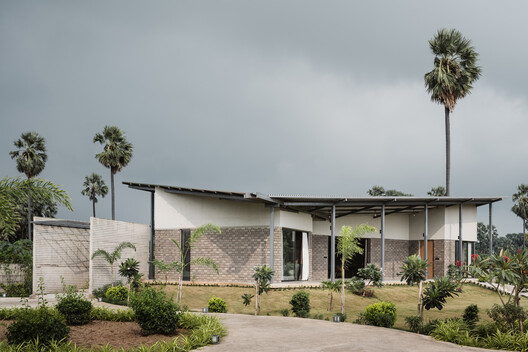