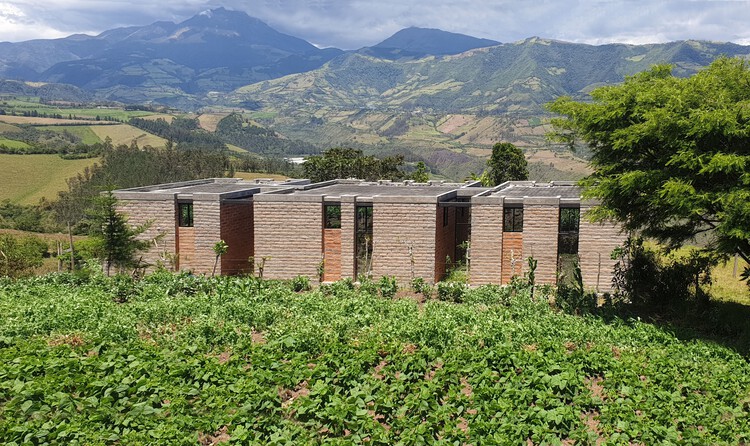 Text description provided by the architects. The project is located in the San José de Minas parish known as “El Granero de Quito”. It is located at the highest point of a 3-hectare site to capture the best views of the landscape. Its shape is made up of three volumes intertwined by a metallic structure creating a typology of bars.

The biggest challenge presented by the project was the budget barrier, which led us to avoid exterior and interior finishes. In this way, the construction of the house resulted in a maximum architectural expression in terms of form and materiality. The use of exposed brick and the different techniques implicit in its construction define the tones and textures of the project.

Using stereotomic concepts, an introverted approach was adopted allowing the generation of privacy without limiting the views or the entry of light. The voids between the three volumes are made up of strips in which external gardens are developed. These spaces provide a pause in the middle of the circulation with views of the landscape.

The entrance to the house is in the central volume. Upon entering the house the open social area is discovered, consisting of the living room, the kitchen, and the dining room. The private areas of the project are on the sides, on the right side, the master bedroom with its own bathroom, while two bedrooms with a shared bathroom are on the left side. As a result, the project creates a clear contrast between the brick construction and the green of the immediate surrounding vegetation, with these two elements complementing each other. 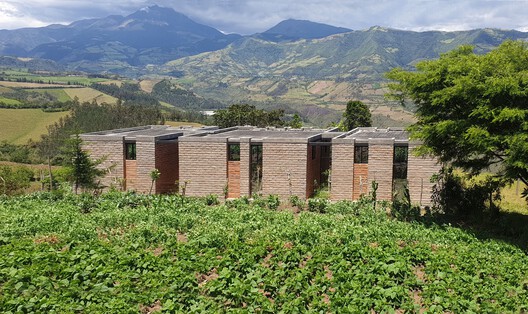