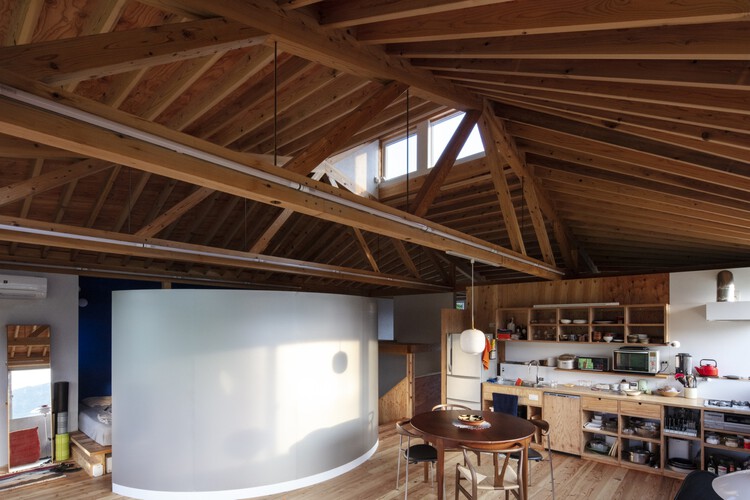 Text description provided by the architects. This project is an atelier of a climbing pants designer and his family’s house.

They lived in Tokyo, but they wanted to raise their daughter freely and he wanted a bigger atelier. So he decided to move to the local area. Their request is a house open to the surrounding landscape and living comfortably in a space without partitions.

The concept of this project is "how to open" to the surrounding landscape. It was important that not only the view is open, but it is open as an experience. Therefore, a wide and flexible use concrete floor was created around the atelier on the first floor. There is also space for bouldering. And, there is also a balcony on the second floor that looks like an extension of the living room. In Japan, nature is not an object to control, but an object to feel and experience the wind and scent.

To realize the continuous space as described above, I want to reduce the number of pillars as much as possible in order. Therefore, the two rows in the center of the grid are made into a truss structure, and there is connected to the horizontal line on the outer circumference of the building with rafters. A large three-dimensional curved roof has been created that smoothly spreads while capturing the landscape.

For the truss structure, the part where the tensile force works is a long bolt of 12φ so that it becomes a light structure. The independent pillars that stand on the concrete floor have the connection part as the original steel parts, and only the 21.7φ steel pipe can be seen. 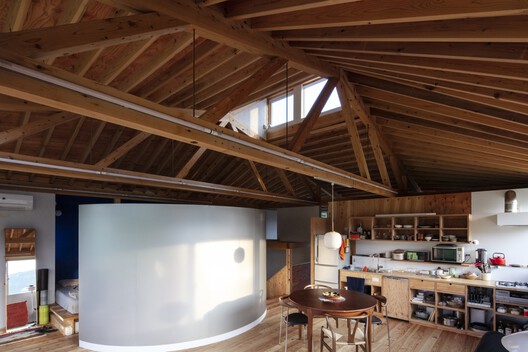