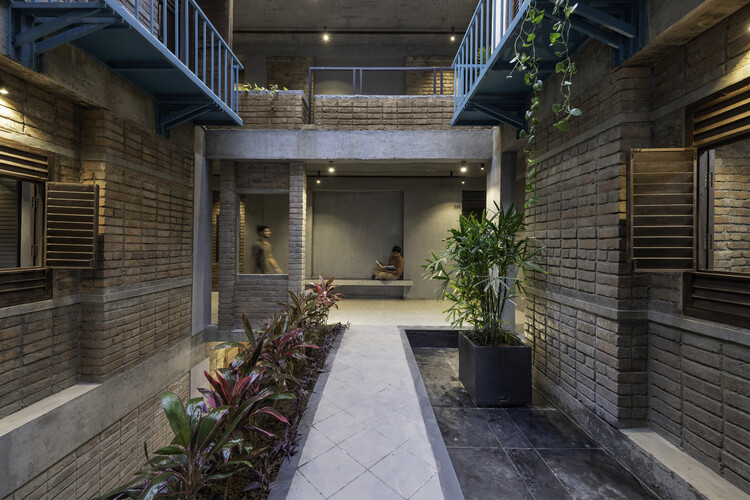 Text description provided by the architects. To create an interactive and inward-looking environment in a chaotic residential surrounding for the students to live in. The key factor in the design process was to enhance students’ interaction, within the indoor spaces that percolate outward and interact with the landscape around them.

Within the site, we were blessed with existing trees, four Ashoka trees on the south facade, Fishtail palm on the north-west side (which is sustained inside the building as per design), Almond tree on the north-west corner. All the above trees are sustained. The client wanted to design a boys hostel with maximum utilization of FSI for a commercial output and the use of affordable material to make it cost-efficient was the only brief.

Planning has been made simple, by planning rooms and lobby overlooking the courtyard. And staircase connecting lobby on x-axis, along with open terrace and courtyard on the y-axis. TheFloor plate consists of the plinth, first, second and third level.

By carving out small cutouts in similar floorplates from the first floor to the terrace slab gives individual identity to the blocks. Shuffling of walls on similar floorplates creates unique layouts of rooms and provides various depths to all side facades. The fenestration of rooms is planned according to existing trees which act as a picture window or visual canvas in the rooms. The Jharokas overlook the courtyard and act as a great source of connectivity within the building. Every room is provided with a balcony overlooking the street as well as a few balconies that provide visual and vocal connection to the users.

TheCourtyard brings in light and ventilation and creates a link between the indoors and the outdoors. It is the heart of the hostel which encircles the activities around it. Entrance, surrounding rooms, jharokas, and lobby spill out to the courtyard, creating a common living and interactive area in the center. It is covered with a pivoted roof allowing a phenomenal amount of light and ventilation in the place. It is enveloped with a triple storey brick jaali on an external south façade serving as a source of airflow, illumination through jaali, and providing thermal comfort.

The lobby: is only 8 ft wide lobby acts also as a passage on every floor. As shown in the plan entrance of all rooms doesn’t open in the lobby space but has a spill-over space by shuffling of walls creating inbuilt seating spaces along with planters in the front of the lobby. It has different illustrative paintings finished with acrylic colors on every floor inspired from the elements of the building itself to create illusion and add on to the interiors and a surprise element for the users.

Every room has a different interior layout. The wires running through 1 1/2 – 1 1/2’’ M.S Box sections are customized electrical design, also gets converted into ledges acting as book racks for study tables finished with Kadappa Stone. The play of colors in the wardrobes in rooms breaks the monotony of raw materials and provides uniqueness.

The project captures the gazes with its adornment of locally available clay bricks, whose design in its essence is the fruition of the local material to give a rustic effect. Using simple and locally available materials such as – locally made clay bricks, Deodar wood, vitrified tiles, kadappa stone, M.S door frames, and windows creates the building elevation and continues in interiors of the building, with the limit of the material like pop and gypsum. Use of basic material to envelope the building with the help of the local team, planning activities and rooms around the existing tree, minimal use of plastered walls, brick jaali, fenestration plan according to the surrounding trees helps connect inner-outer spaces as well as existing trees acts as a visual canvas in the rooms and pours in light and ventilation in the building. Walls are treated with a single coat of putty and grey pigment and were scrubbed and finished with a transparent coat to get the concrete effect making it cost-efficient. 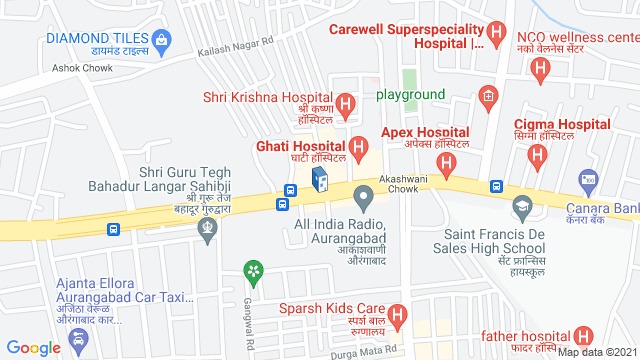 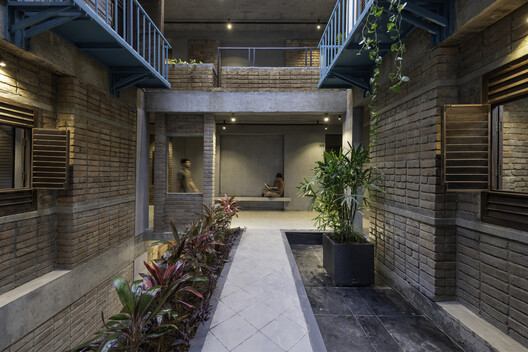