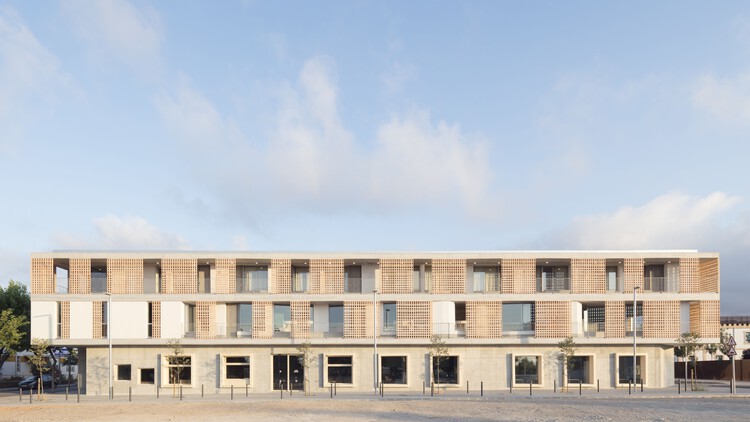 Text description provided by the architects. The building is a large container that filters natural light in different ways to gradually shape interior spaces that are directly related to the exterior ones. It is this interior-exterior relationship that originates the project.

The main idea is that all the activities carried out inside the building have a direct connection with the outside. That is why it is very important to create an enveloping skin that allows this linking of spaces and helps us to delimit and blur the border between interior and exterior at the same time.

The building is arranged longitudinally to the longest facade of the site, separating from the rear dividing wall. It has three floors above street level and one below ground level.

A passage has been left between the main body of the building and the dividing wall to be able to locate the main communication elements: the vehicle ramp and the entrances to the vertical communication centers. At each end, there is a vertical core for access to the four levels.

The ground floor, directly related to the street and the city in all the facades, is the base of the building, solid and stable. The lighter floors create their own outdoor spaces as if they were private extensions of the street.

In this way, various places of the relationship between the users of the building are developed: from the most private on the second floor of houses to the most public on the ground floor for production and restaurant. In any case, the concept of the community strongly linked to the different areas always underlies.

The owner of the building, the Fundació Amadip Esment, aims to allocate all the spaces to its users, people with intellectual disabilities but does not renounce sharing them with the community, since its services include training, production, and job placement.

The building program is developed separately by floors. On the ground floor there is an industrial kitchen and a workshop with the possibility of training for various groups. Attached to the kitchen and without physical separation there is a bar-restaurant room with a reserved room that can function as a classroom. Some large square windows serve as a filter with the exterior street and allow them to be used as seats both inside and outside, marking the semi-exterior character of the space.

On the first floor, there are four large classrooms and office space. Access to each unit is from a covered porch through a patio that is at the back. The large windows in the classrooms avoid the sun through interstitial spaces between them and the façade, which are semi-closed with fixed lattices.

On the second floor, there are 11 minimum homes with a single room and a day center on the corner. These homes, designed to promote the autonomy of people with disabilities, are arranged in a corridor system, accessed from a covered porch on the facade of the building protected from the sun with latticework. This corridor is the private street in which the inhabitants interact and which also functions as a terrace. The basement is used for parking, dressing rooms, and storage.

To emphasize the solidity of the ground floor, its façade reveals the reinforced concrete with which it is supported. The lightness of the rest of the floors is materialized in the slabs seen on the façade and the permeability of the lattices on the facades.

The reinforced concrete structure has been left visible throughout the building, both the floors and the pillars and walls. The finishes have followed the line of leaving the product as less elaborate as possible. The fired clay, produced on the island of Majorca, has been used in exterior flooring and in the latticework of the façade. Accoya wood on the ground floor windows and DM and Viroc wood on the doors of the building reduce maintenance to a minimum.

The building has an installation of photovoltaic panels for self-consumption and a heat recovery system from the refrigeration machinery for heating sanitary water. In addition, the air-conditioned spaces have been reduced, being all the semi-outdoor communication spaces, including the vertical accesses. In this way, the final carbon footprint is smaller. 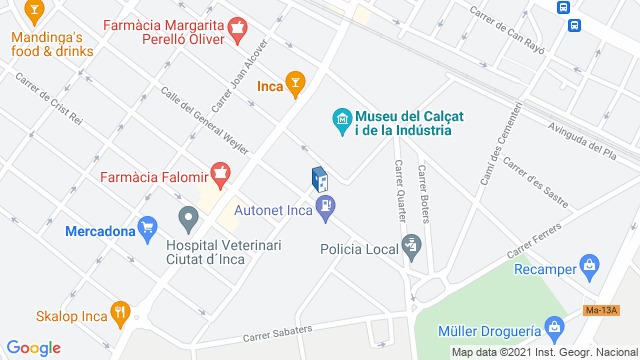 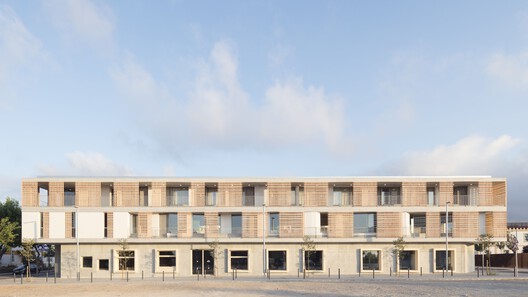