Bakeries are timeless. While industrialization and commercialization have transformed the art of baking and baked goods, bakeries remain important community spaces for gathering and defining neighborhood identity. These iconic spaces are still defined by a common programmatic understanding that combines areas to gather, socialize, shop, and work. Found across cultures, they are diverse as they are functional and expressive. 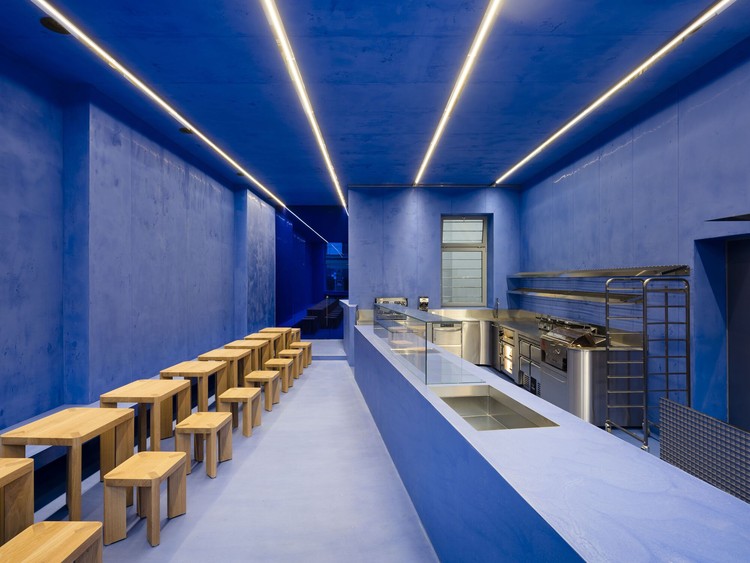 Following our first article on bakeries, this second feature draws an even greater picture. Once again inspired by the term “baker’s dozen”, the projects explore the relationships between space and craft. The term originated from practice of baking 13 items for an intended dozen, thus insuring bakers wouldn’t be fined for selling goods lower than a statutory weight. Located in cities around the world, the designs share similar ideas on display, light and interior design. Showcasing different approaches to space, form and tectonics, together they paint a picture of sweet delight.

Dongqi turned a building in Shenzhen into a new concept bakery and developed its visual identity. The team named the space GAGA TOAST and proposed a ‘More Than Toast’ narrative. GAGA TOAST is not only a bakery that offers delicious toast, but also a gathering space full of toast elements. Toast elements permeated the space, whose design was centered around a special shaped brick.

The Steel Moment shop draws the landscape from the facade's vine and the garden of the yard into the interior, separating the space with various movements, and allowing you to have special experiences from the inside. The team started to create a design concept directly from the idea of how to overcome the high floor height and level differences of the original building. In order to effectively solve the level difference, different levels of floors were created at the center of the space.

This project is the interior design for a bakery shop in Kyoto, Japan. The bakery shop is located on the first floor of the building, which has a unique character after surrounding buildings were rebuilt. First of all, the team tried to regain original expression by replacing reformed aluminum sashes with wooden sashes. Next, in the inside, they developed the antique showcase, a glass case with wooden framing placed on top of a large roughly cut log weighing 500kg.

There are various forms of relaxation. To capture this, the team drew the diverse form of relaxation on a long sheet of paper, then folded it while cutting out the openings with scissors. They built MOSP: a place that reflects each individual’s form of relaxation. Openings between these walls act as a vent, making the place a space of relationship without boundaries. “MOSP”, located in Daejeon city, is under the foot of a mountain.

Materia was developed in a commercial shop in La Condesa, a meeting point and a transit hub with a great offer of coffee shops, and contains the vibrant urban image influenced by different artistic currents through the years, such as Art Deco. The premise of the Bakery comes from the intention of feeding based on raw materials, seeking to eliminate the perception and predisposition that traditional bakery is the opposite of a healthy and beneficial diet.

On the coastline of Ulsan, PanJi Village exists. Its name derived from the look of the plate joint, which looked like Panji (cardboard) that was made through volcanic activities. Panji Village has a plank rock where the myth of the sea goddess started. According to the myth- she exhaled a deep breath into the water, then a deep, round hole was created- and there she floated water shoes on it. The team built the identity of the brand and space by reflecting the place of this special village.

For the project of this bakery specializing in cakes that works in the takeaway system signed by Guilherme Garcia, the team sought to escape the traditional, bringing inspiration from Art Deco, a style that permeates the project's identity. Pink, green, and sand tones were the basis of the composition made for this commercial project, playing with shapes and nuances of the same color, making the senses emerge and the environment turning into an experimental space.

Pain Paulin bakery, a project designed by Ciguë in Cap Ferret, France, is the passionate story of a man who decided to drop everything to become a baker. Instead of seeing the local urban planning regulations as a constraint, the team used them as a force to drive the project. Oyster shacks are pretty much what defines the area; it is the local reference, both mentally and physically, the shack is the Cap.

Implanted in a corner lot, the project for this bakery seeks to break with the patterns of land occupation of the region, through a large setback proposed on the larger face of the building, where the parking and a living space are organized projecting from the exhibition and sales area of the bakery. In addition to increasing the visibility of the facade, this solution highlights the building of the housing constructions.

Located over 20 years on the 25th April Street in the village of Sertã, Estrela Doce Bakery opened a new space on the same street but with a totally renewed image in a 125 m2 area. Considered a must-see reference in the Beira Interior region, the present owners took a step forward not only in product manufacturing but also in the space, always aiming to maintain its close relationship with customers inviting those responsible for their success to feel at home.

The presented sales premises of Przystanek Piekarnia bakery build upon the idea created for the entire chain in 2013 by Maciej Kurkowski, founder of Five Cell design group. Each of the interiors is equipped with a unique system of modules made of stained birch plywood. Depending on such parameters as location, size and height of rooms, these modules may be used to create a suspended ceiling, display racks or serve both functions at once.

Bake Cafe is located in CBD of eastern lake in Suzhou, the heart of Jinrong street. It mainly operates with baking, coffee and light food. The designer used a warm design method to make the cold Cement Forest, giving customers a "psychological hug" and a sense of belonging. Floor-one’s two meals mainly have Northern Europe style, third floor has a heavy industrial style. The space’s light, music and nostalgic retro atmosphere aimed to help people relax.

or the second Berlin branch of Aera – a gluten-free bread manufacturer and café located at Rosenthaler Platz – the architecture duo Gonzalez Haase AAS designed a space that takes full advantage of its prominent location by being impossible to overlook. The entire depth of the new store is made visible through a large storefront window, allowing its rich Lapis Lazuli blue interior to take center stage.