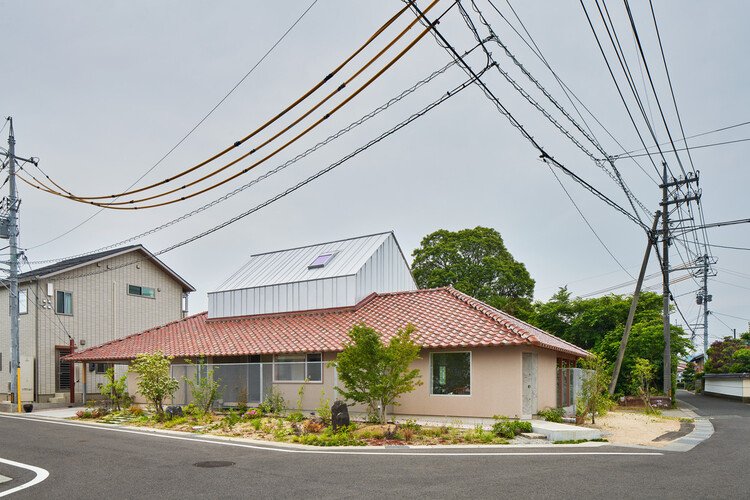 Text description provided by the architects. The site is located on the border between an old town and a new residential area. The roofs of the surrounding old houses are covered with Sekishu tiles, known for their unique reddish-brown color, forming a landscape typical of a village in the San-in region, but not seen in the new residential area. Fascinated by the Sekishu tiles, we proposed a house that blends the boundary between the two areas with the theme of a roof that maximizes the appeal of these tiles.

The long roof, which takes advantage of the wide frontage of the site, has a strong slope to prevent snow from settling on the roof, on the other hand, the roof is hipped so as not to give an oppressive feeling to the surroundings. In recent years, the use of lead has been banned and glazes have been limited, so the color and shape of tiles have become uniform.

The roof and walls of the second-floor volume, located roughly in the center of the plan, are made of galvanized steel sheet with four different widths of vertical haze-thatched roofing, incorporating the soft expression of distortion created by the manual haze-tightening process. The galvanized steel fence changes the view for passersby depending on the angle, and also provides a margin for plants to transform the appearance of the building over time.

The plan of this house for an elderly couple is to complete their life only on the first floor, with the bedroom at the center of the house. The bedroom and the living/dining room are separated by a large shelf that extends toward the double-height ceiling, but it is easy to communicate with each other by feeling the presence of others through the glass or by opening a small door. The void space is a pocket of natural light that pours in throughout the day, and the flickering light through the curtains and the shadows on the walls indicate the passage of time.

The courtyard and entrance at the west end of the site are positioned as an open space, and the large entrance hall with a piano is intended to be used as a salon for occasional gatherings. Daily access to the house is through the garage at the east end and the sunroom, which also serves as a windbreak and drying area. The sunroom is partially covered with a mixture of glass tiles to let in light. The frame of the building is bare, even the underside of the tiles is visible, and the flush doors are primitive, revealing the structure inside.

Old houses with strong regional characteristics and industrialized houses instantly create typical suburban residential areas. As if to bridge the gap between the two generations, this house is characterized by the "unevenness" that is actively incorporated into the industrial products used. The glassy surface, which is resistant to rain and snow, changes its expression in a variety of ways, like iridescent colors, and is well reflected in the cloudy sky of the San-in region. 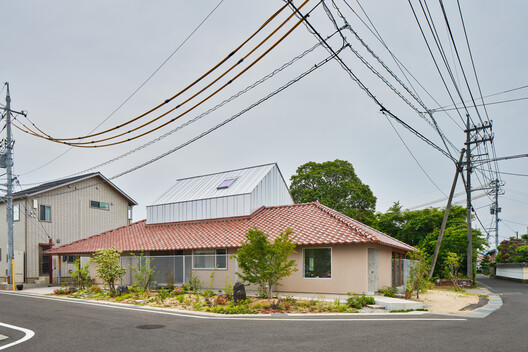