Save
Framing Indeterminacy: The Incorporation of Uncertainty Into Architecture
Share
Or
Copy

By definition, architecture and urban planning operate within a certain degree of indeterminacy, using present context to find viable answers for an unknown future. As a result, design is a constant search for a balance between prescribing and taking a step back to make room for alternate yet unforeseeable scenarios. Uncertainty is an inherent condition in present-day society, and recent rapid social, economic, and even environmental changes prompt a closer look at how architecture can incorporate indeterminacy. The following reviews some precedents and contemporary examples that programmatically operate with indeterminacy, highlighting several strategies for designing for uncertainty and change. 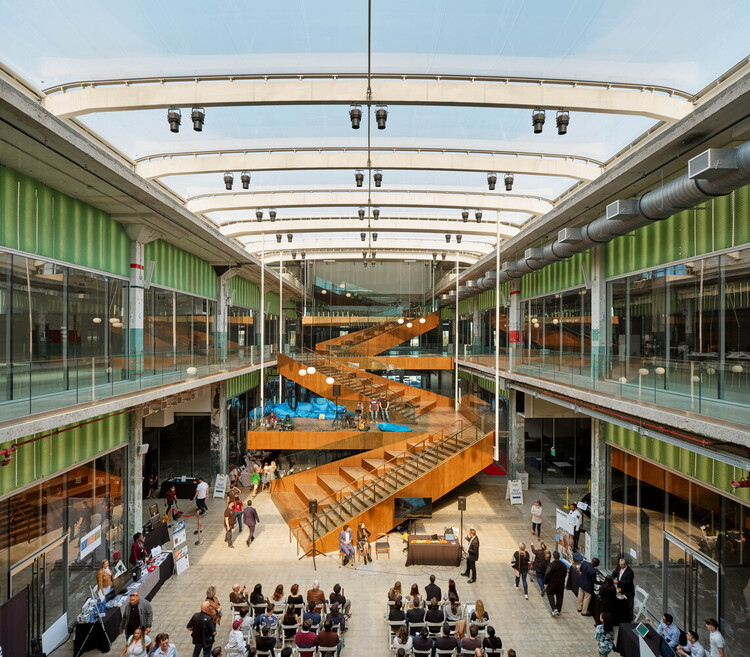 Architecture that works with uncertainties is based on mutable processes and flexible relationships between elements rather than fixed, highly formulated and prescribed designs. Architectural objects are treated as evolutionary systems, an open-end design approach that The Metapolis Dictionary of Advanced Architecture calls "determinate indeterminism". In the 1960 and 70s, the issue of indeterminacy played an important part within the architectural discourse, as Archigram and Superstudio exploited uncertainty with their radical visions for the future. Also in the 60s, Cedric Price envisioned the Fun Palace, a project with a fluid program and entirely reconfigurable, a radical new space of learning and leisure constantly adapting to the needs and desires of the users. Change and indeterminacy were integral to Price's vision, who delighted in the unforeseen architecture developments.

Constant Nieuwenhuys' utopian project, "New Babylon" (1956-1974), rejected programming, using architecture as the generic framework for the activities generated and shaped by the users. The artist proposed a system of overlapping planes which could be shaped and reshaped as they best fit society's momentarily goals. While Constant's proposition is a much more elaborate vision for a new societal model, it is also the expression of productive use of indeterminacy, where architecture, albeit reduced to very few gestures, sustains a multitude of activities impossible to anticipate.

Similarly, the early work of OMA uses ideas such as the surrealist game cadavre exquis, where different realities with no common denominator are put together in an unexpected relation, or the concept of spatial lobotomy to decouple form and programme, generating new entities with various possibilities of use. Just as urban planners create the framework in which architecture unfolds, so were architects experimenting at different moments with defining a framework that can accommodate a variety of scenarios, evolving with time and through the input of users.

There is the presumption of inherent change in use and programme over a building's lifespan. Some architects are strategic in providing room for change. Dutch architect John Habraken is the promoter of user participation in mass housing design and the first to define the concept and principles of "open building". He makes the distinction between "support" – the communal, shared or public aspects of the project which are more permanent and "infill" -the individual, private space, subject to change, arguing that the responsibility of the architect lies with the "support" elements. He goes further to say that the architect ought to relinquish control of what he defines as "infill", going against the notion of a defined floor plan.

The idea of an architectural framework circumscribing various scenarios is also apparent in the work of Lacaton and Vassal, who anticipate change and adaptation. The Nantes School of Architecture features a rigorous concrete structure that provides an initial definition of space, then complemented by light and flexible partitions that showcase a provisional response to the programme, with the possibility of being altered and adapted with the evolution of the school's needs. Another way the practice operates with indeterminacy is through excess spaces. In these cases, the brief is resolved as pragmatically as possible, enabling the creation of additional, loosely defined spaces that enrich the overall use. When this space takes significant proportions, such as in the case of the Maison Latapie, it is no longer an extension of the original programme, acquiring a certain autonomy that invites users to imagine new forms of appropriation.

For many architectural programmes and typologies, there is no clear direction of evolution; therefore, there is a new shift towards more mutable designs. Proactively including indeterminacy in the practice of architecture is a step towards future-proofing buildings against rapidly evolving conditions.