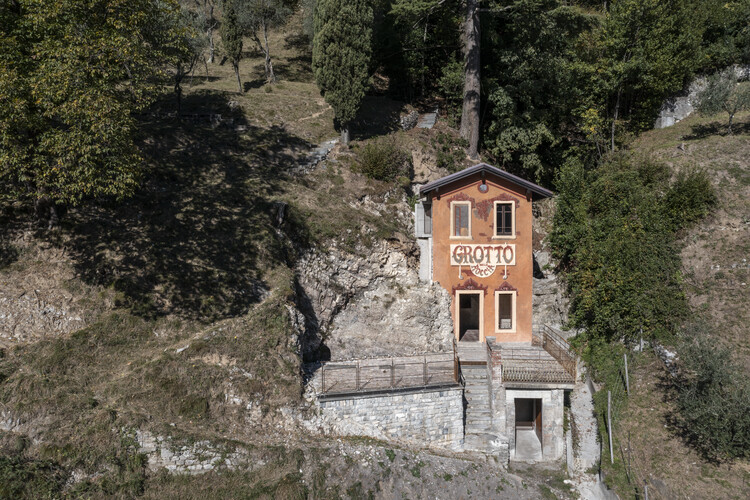 Text description provided by the architects. The Grotto della Roccia is a small historic building, which has been out of use for almost a century, set in the rock at the beginning of the Gandria path and overlooking Lake Lugano.

The building has three levels: a basement with a barrel-vaulted cellar excavated in the rock above which there is a small terrace, a ground floor with one side made of rock whose internal dimensions are 3.4 x 3.6 m, and an upper floor of the same dimensions that was only accessible from the outside.

Even though the building was in poor condition and in a total state of disrepair, it was decided to conserve it by maintaining as much of its original appearance as possible but enlarging the external terrace and the internal part by connecting the two floors with a new staircase.

On the inside, structural consolidation work was carried out: in the basement, new walls were built and a new reinforced concrete slab (10 cm thick) was cast inside the original masonry; on the upper floors, the existing slab was replaced with a new one in reinforced concrete and metal beams, the surface of which was sown with porphyry aggregates from Cuasso al Monte and limestone from Moltrasio (Sasso di Caprino) and then smoothed.

In the basement, a bathroom was introduced which is separated from the corridor by a 3.5 cm thick curved concrete wall, on the upper floor the door connecting to the outside was changed into a window facing south and the existing roof was replaced.

Everything else was left in its existing state or restored.

Externally, the façade of the building, which was also damaged, was restored, bringing back the original pictorial decorations and a new terrace was added to the existing one. The surface of both terraces was paved with re-used stones (Porfido di Cuasso al Monte, Sasso di Caprino, granite slabs, and strips of white marble obtained from the re-use of ancient slabs with the names of the streets of the city of Lugano).

The original parapets have been maintained and modified to comply with the law; the new ones, also internally, are in rough oxidized iron. 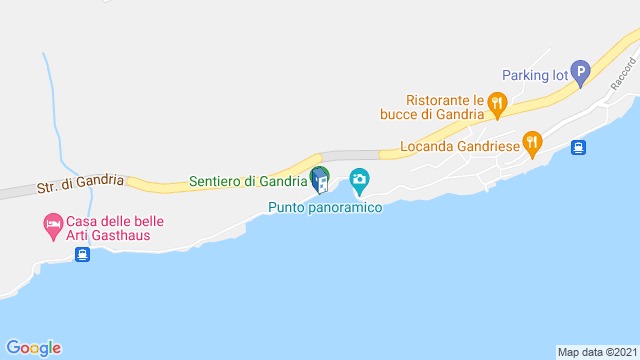 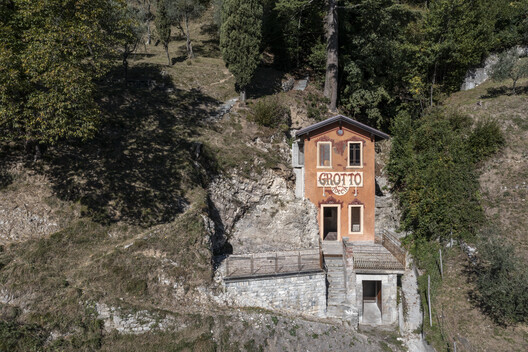