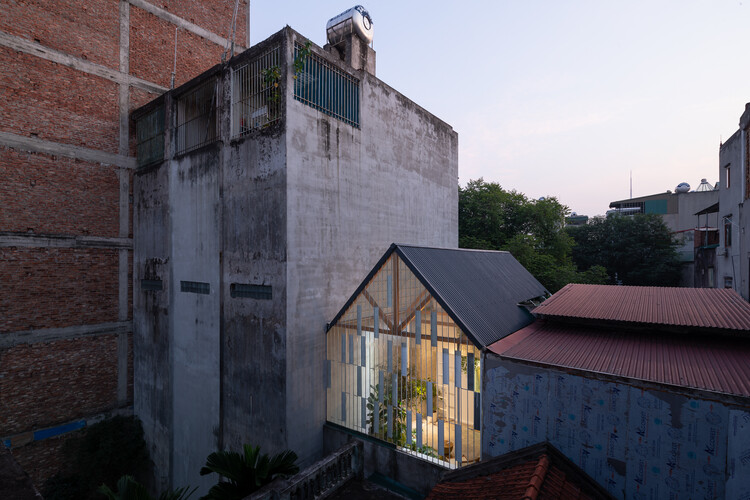 Text description provided by the architects. Turn a part of a neglected house into a two-storey house with lots of green spaces. The house is located in a deep alley of Hanoi, as the witness of rapid urbanization and population growth. The house on the 80 square-meter lot was split into two halves, one part of which was converted into a home for a young family. The rest was being abandoned when we approached the project.

The new owner – a bachelor wanted to renovate it into a small but bright, airy, and greenhouse within a suitable budget. The house is located in a deep alley, so costs can be incurred due to the transportation of demolition waste. Furthermore, demolition may affect the sustainability of the previously renovated part of the house. Therefore, the owner along with the architect decided to renovate instead of demolishing it to build a new one.

The first floor is divided into a bedroom, a bathroom, and a kitchen. The corridor entrance from the alley to the inner space is like a buffer space which makes the house outstandingly different from surrounding tube ones. The second floor consists of a working room, a laundry area, and a rooftop yard with many trees. By using perforated metal stairs to connect the first floor and the second one, natural light can overflow inside the kitchen during the daytime.

Half of the diagonal roof was made of clear corrugated polycarbonate in order to increase light for the green spaces and also make the place look bigger. The roof along with the front and back sides can be described as a raincoat covering the existing house, protecting the walls and slabs from deterioration due to the impact of weather. Since the existing part had been built for a long time and more or less showed signs of degradation, the ‘raincoat’ was designed as light as possible with steel tube, roofing panels, and wood - popular local materials.

The total expense was considerably reduced because the roof structure and some furniture were made of chinaberry wood taken from the garden of the owner's grandparents. Those trees had been grown for many years and who knew they would become a special gift to decorate the grandson’s stunning house.

As described, we focused on exploiting space and light, the finishing materials are not kind of elaborate though. After completion, the house brought the feeling of surprise and delight to not only the owner but also his neighbors! 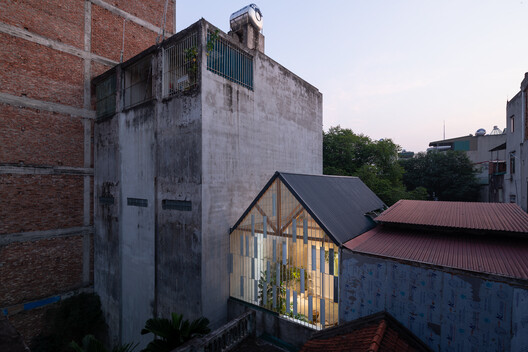