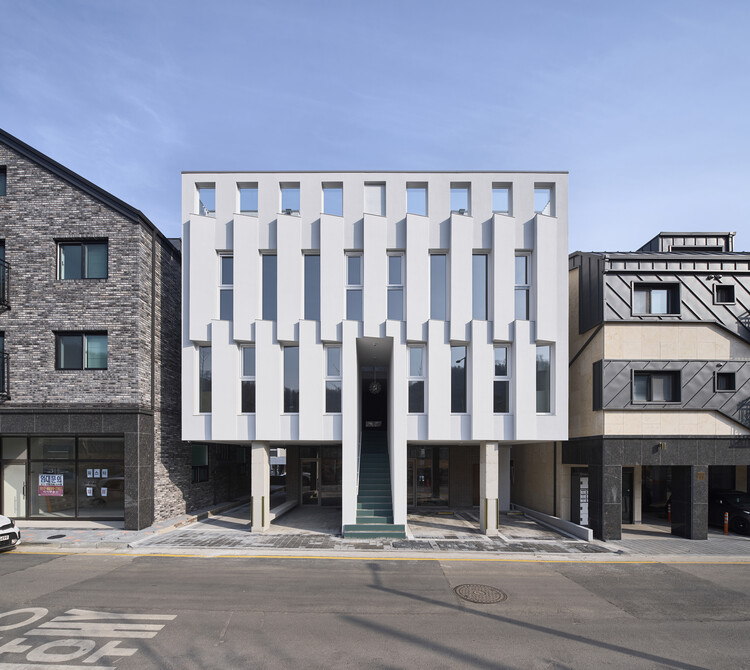 Text description provided by the architects. The White Curtain Reveals Its Presence in the City. The site is surrounded by neighboring buildings on three sides and only one side is revealed towards the road. We designed a building that reveals its presence as a white curtain in the urban setting. Within the building, a café and multi-family housing coexist, and inevitably, hierarchy of lessor and lessee is created. By incorporating a white-curtain-like façade, we tried to alleviate the spatial and visual hierarchies to express a welcoming gesture to visitors and residents.

Composition of Four Units. Within the constraints of the district zoning plan, we decided to plan a café on the ground floor and four residential units with two bedrooms that extend from the first floor to the attic.

Curtain-like Façade. The main objectives of the façade were that narrow and long windows illuminates individual’s life and that tilted elements alleviate the glare from the West side enabling the residents take a step closer to the windows.

Concerns for Equality. In a project with three floors, an elevator becomes a “white elephant”. It is an obviously convenient option but residential space would be limited and leasable area would shrink. Therefore, the project is planned in such a way that every resident enters one’s unit on the first floor after climbing the common central stairs from the ground floor.

Four Maisonette Units that Resemble Quadruplets. In the Maisonette composition, all four families can have an attic and a rooftop garden, removing the hierarchy of the lessor and the lessees and satisfying the physical conditions for an equal living environment. Especially, attics play a role as a third bedroom rather than an extra room and roof gardens are a kind of compensation for the ground floor outdoor space occupied by the parking lot.

Coexistence of the Café and the Residences. In a site surrounded by neighboring buildings on three sides, it is almost impossible to satisfy all of the programs and parking. In a typical design process, the primary program housing would come first followed by convenient parking layout and a café. We, nevertheless, came up with an alternative to overcome the constraints. The white curtain catches passersby’s attention and the small front yard and a concrete bench for the public is designed for the café placed sitting further from the street. We imagined that it would become a small gathering space for group of local residents. 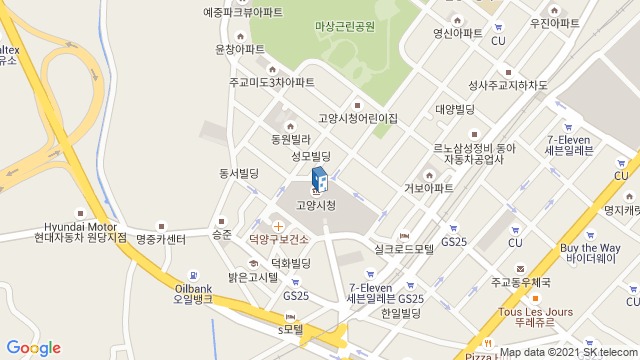 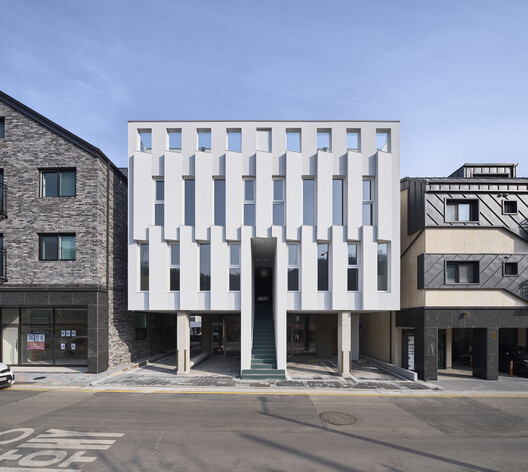