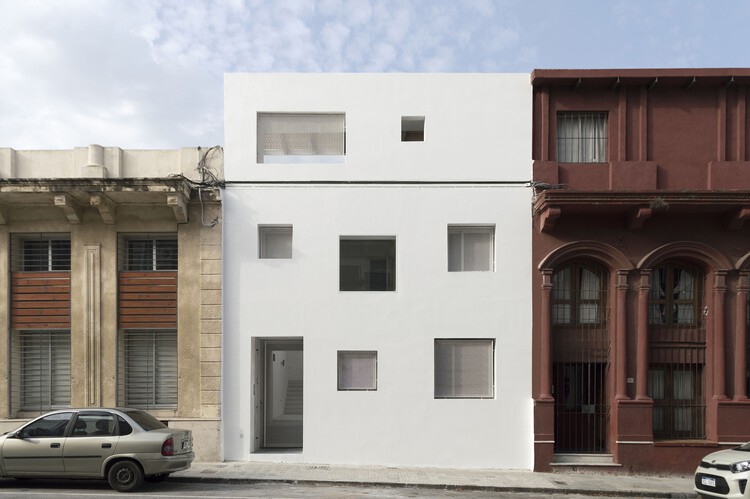 Text description provided by the architects. The project involves the recycling of a standard house, with a structure in poor conditions, in the Cordón neighborhood of Montevideo. The building, originally a traditional courtyard house, is transformed into a small complex of three units. One of them is a two-room duplex unit facing the street while the other two are one-room flats looking at the central courtyard. The roof incorporates a pergola and is equipped with a barbecue and a tender. The aim of the project is to develop homes satisfying today's demands, but taking advantage of the existing elements of the old house.

The patio is consolidated and secondary construction is demolished in order to provide natural light and ventilation to the interior units. The existing structural scheme is preserved as well as all the load-bearing walls. A new reinforced concrete slab is built as a mezzanine. A large part of the existing openings is used on the facade, but with a different architectural language.

The roof is conditioned as an outdoor recreational space. It is understood as an opportunity to locate the barbecue - table - bench on the front.

This means having more elements to define the new facade. The facade is a smooth white plane with holes. The intention is to appreciate the thickness of the original wall, which is half a meter. For this, the openings are tackled in different leads. Each hole is shaped in a different way, this generates movement both in the plane of the facade and in the depth of the openings 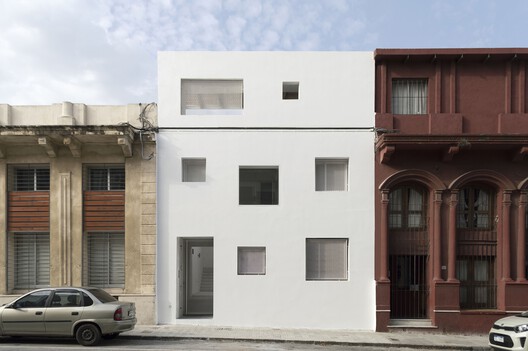