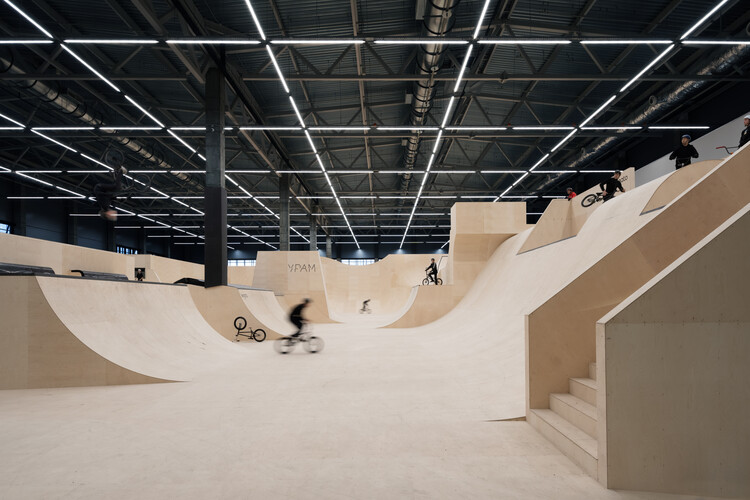 Text description provided by the architects. The largest extreme park in Europe opens in Kazan. The new indoor sports center stands in the open part of the extreme all-season park that was already completed in summer 2020 by Legato Architects. Legato, the creators of the open extreme park Uram, invited KOSMOS Architects to work together on the building of the sports center. Uram (means “street“ in Tatar) is the center of street youth culture, which combines sports and educational, social, and cultural functions under one roof.

The center with an area of almost 8 000 square meters hosts on two floors extreme sport zones (airpark, street plaza, concrete bowl, and skate house) and cultural spaces open to everyone: a center for contemporary music, a DJ school, a skate shop, dance hall, gallery, lecture hall, cafe, and recreation area. The new building will become not only an extreme park but also a multifunctional public space where visitors can come at any time of the year. Extreme Park URAM is a unique set of venues and diversity of extreme sports facilities within one building.

Architecture. The facade of the Uram Street Culture Center consists of 2 parts, performed on different scales. The upper volume is a minimalistic rectangular block, faced with brushed stainless steel, which performs on an urban scale. Visible from the opposite side of the Kazanka River, the abstract volume reflects the sun or grey sky and changes depending on the weather conditions. It works as an urban landmark. The geometry of the facade material - corrugated metal sheet - refers to typical industrial buildings and fences of the surrounding area, whereas the material finish - stainless steel polished to a mirror shine - lends the attractiveness of a public building.

The upper minimalistic volume rests on several flamboyant concrete hills that develop the formal expression of an outdoor extreme park. This part of the facade performs at the pedestrian level and allows the creation of a human-scale space around the one-hundred-meter facade of the sports center. The hills blur the lines between architecture and park infrastructure, transforming the façade of the entire building into a radical functional landscape. The facade will become climb-able, slide-able, jump-able, and roll-able. The hills will organize a lecture hall, a playground, and continue sports functions. Despite the fact that the hills of the facade are still to appear, the indoor part of Uram has already been completed.

Interior. Here, architecture merges with sports facilities, combining diverse spaces and functions with the powerful atmosphere and drive of modern street culture. In this project, Kosmos continues long-term research of the principles of utilitarian architecture, published in the book ConTemporary ArchiTecture. Legato develops its experience of working with the world's best riders and park builders, as well as creating a unique team of park builders - not just builders, but professionals in creating extreme culture. The concept of the building's interior is based on exposure to simple street and industrial materials, inexpensive and practical: concrete, sheet metal, reinforced glass, plywood, drywall, masonry materials.

The natural color of all these materials varies in shades of gray. To give an identity to the space and to create comfortable navigation in the sports center, an additional bright, signal color - Volt (bright green-yellow) has been introduced into the design of the interior space. This color is most noticeable to the human eye and therefore is so actively used in street and road navigation to ensure safety. The bright color denotes the most important areas in the building and guides visitors on the way to go. Reception, information board, entrances on the escape route are always highlighted in bright color and immediately noticeable in the interior In addition, the contrasting color allows you to form an alternative geometry of the space.

Each area of the sports center has its own unique look, created by one basic technique or material. In the airpark, the main material is plywood, which creates the total space of the “plywood ocean”. In the lecture hall, the space is formed with the help of a "cloud of points" - suspended lamps that form an alternative geometry of the space. Bowl's main material is concrete, and the interior of the main inner street is defined by a spatial grid of lamps and wall frame profiles. The radical and functional design follows the logic of infrastructure facilities, street and road navigation: its simplicity, radicality, and functionality.

Sports objects. Concrete Skateboarding Bowl The concrete bowl (deep bowl for skating) is designed for competition and is designed according to the key rules of skateboarding. You are equipped to be used on any sports equipment. The chief designer of Legato Sports Architecture, Vasily Borisenko, worked on it together with John Magnusson, one of the most famous Swedish skateboarders. Bowl design refers to the classics of skateboarding: the sides are original copings - like in the abandoned Californian pools in which skateboarding was born. The bowl can be climbed using a ladder whose railings are painted in vivid volt color.

Above, there is a concrete amphitheater where athletes can relax, and next to it, on the flat parts of the bowl, there are unusual figures for perfecting the new tricks. Plywood sea for BMX freestyle There are quite a few indoor wooden airparks in Europe, but URAM takes BMX freestyle training zones to a new level in terms of scale and diversity. It is most convenient to observe the wooden airpark from the gallery on the second floor - this is the space around the perimeter of the entire zone, raised 4.5 meters above the floor. The windows offer a beautiful view of Kazanka, while the visibility of the airpark is not lost: spectators, riders, and judges will be able to comfortably watch everything that happens below. The amphitheater overlooks a large children's area, separated by a wall from the main airpark for safety. The section is long enough to accelerate, while the necessary figures are assembled so that skiing is as safe as possible. 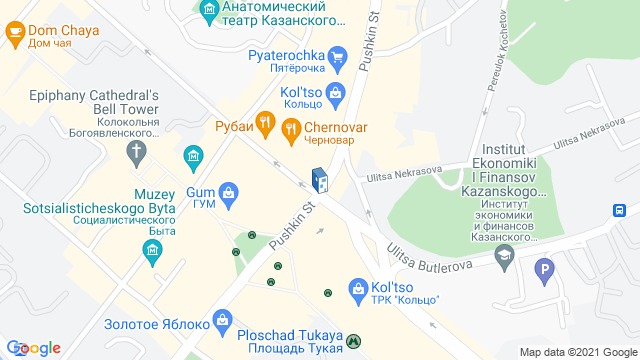 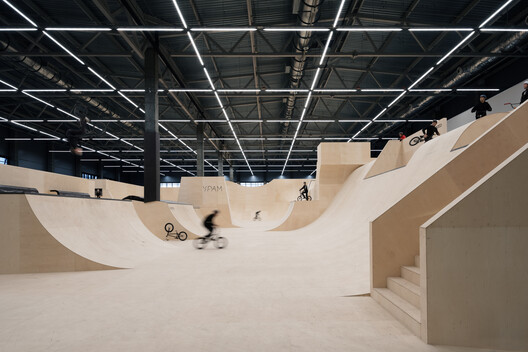