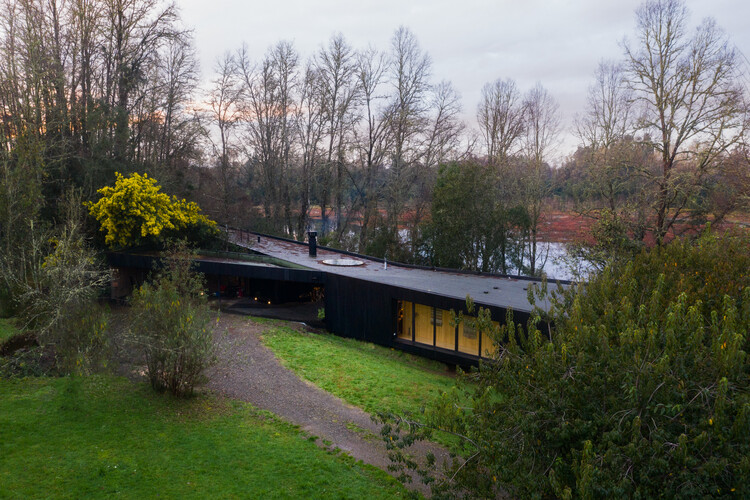 Text description provided by the architects. From the T house of Cazú Zegers, designed in 2009 and built in 2011 on the shore of Laguna de Aculeo in Chile, a way of naming the projects arises, which comes from the alphabet, it is the alphabet of the poetic word and with this a series of houses that are the abstract synthesis of a letter that becomes a work of architecture. It has to do with the creation of reality through language. Each "letter house" has a unique dialogue with the landscape, a territorial dialogue where the work is a unity between landscape and architecture. The Ye house is a pavilion suspended over a landscape of myrtles with a privileged view of the Cayumapu River and its wetlands, created after the earthquake of May 29, 1960, in Valdivia. These wetlands have a rich fauna of birds such as the endemic black-necked swan and a dense vegetation layer composed of reeds and lotus flowers, among other species that are very characteristic of these territories.

The program is created to accomplish a house to spend the weekends. The architectural response is the creation of 3 volumes in the arrangement of the letter Y, articulated by the access. The main pavilion for the couple is placed parallel to the river, then a second volume to receive each other's children and their friends, placed slightly inclined, to accommodate the width of the land and control the length of the building. Both pavilions are articulated through the access -which is at the same time a window on the Cayumapu River- from which the third architectural body that makes up the parking lot emerges, a very important place for the homeowner, lover of motorcycles, cars and receiving friends, which is why the parking lot is at the same time an extension of the access terrace.

From it a walkway emerges, which goes to the shore where the dock with terrace and barbecue area is located. Thus, from the parking lot, the house expands to the entire land, to receive friends or is compressed, for the couple. It is a low-budget house, so it is thought of as a simple volume, worked in a mono-material for walls and roofs, a pine fuselage treated and primed with black algifol, to give it a dark tone, which contrasts very well with the surrounding landscape. Inside a very light color is used, which makes the counterpoint with the outside and gives it lightness when living. This is achieved by lining the floors, walls, and ceilings in eucalyptus cladding.

The simple volume of the house, discreet on the landscape, so that the landscape is the protagonist in this dialogue with architecture. It achieves its complexity by means of a double diagonalization of the volumes, on the one hand, the roofs are diagonalized at their ends, and on the other, the vertical ends are diagonalized in a descending way. This simple gesture can be read from the inside, giving volume and texture to the space. The end result was so virtuous that the project created for a weekend home turned into the couple’s main house. 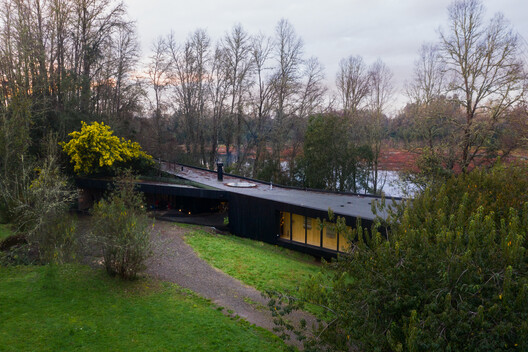