Text description provided by the architects. The Clarion Collection Tapetfabriken, in the Sickla district of Nacka, southeastern Stockholm, is a hotel named after the Swedish wallpaper manufacturer Kåbergs, active in the old factory building already in 1906. A century later, after having functioned several years as a service building for Swedish industrial company Atlas Copco and as an office, developer Atrium Ljungberg proposed a repurposing of the building to add another urban layer to the old industrial area. The idea was to build off of the local industrial history by keeping the existing brick façade and then create a new interior and a modern extension on top. In 2021, the Tapetfabriken hotel opened its doors and began a new vibrant chapter in the life of this historical building.

Located at Marcusplatsen, a park in direct connection with retail, offices, restaurants and other services, The Wallpaper Factory takes advantage of its potential as a central hub in Sickla. At the heart of this hub is the hotel lobby, an attractive place for business travelers, tourists, workers and residents alike. From the morning coffee to the late-night drink, the hotel is bustling around the clock. With the upcoming expansion of the Stockholm metro to Sickla, where traffic is expected to commence in 2030, the district will have an even greater development potential in the future. One which The Tapetfabriken stands ready to embrace.

Initiated as a parallel commission, the winner White Arkitekter designed the building through project planning documents. HMXV Arkitekter then acted as architect for the construction documents. The hotel is run by Nordic Choice Hotels and developed by property owner Atrium Ljungberg with Arcona as the contractor. 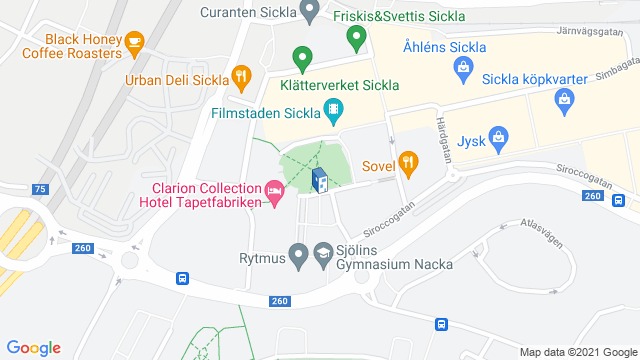