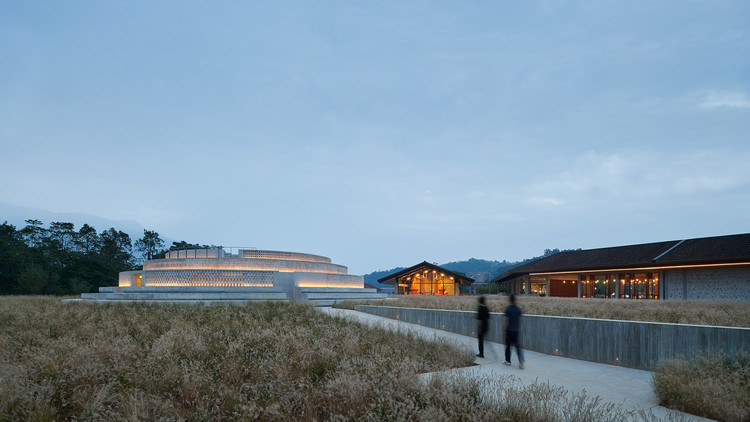 Text description provided by the architects. For over a thousand years Mount Emei has persisted as one of the most deeply spiritual places in China and was named a UNESCO World Heritage Site in 1996. The revered ground upon which our site sits has a rich history itself – through the centuries, this land was once an impressive monastery, the site of several historic battles, and a stopping point along many pilgrimage and trade routes. While any built remnants of the past no longer remain on site, its very emptiness is powerfully suggestive of all of its fabled memories. Three years ago, Neri&Hu won the design competition and took up the challenge of designing a distillery and home for Pernod Ricard’s first whisky in China, an opportunity to create a timeless architecture that speaks to the core values of a visionary new brand as well as the material and cultural heritage it aspires to sustain.

Surrounded on three sides by a winding creek, and with the majestic Emei peak as a backdrop, the site for this project is an exemplification of the Chinese notion of the duality of natural elements which make up the world we live in. Shan-shui literally means ‘mountain-water.’ While shan represents strength and permanence, shui represents fluidity and transformation; they are two opposing yet complementary forces. In the spirit of this philosophy, the position of the proposal is to conceive a gesture whose very strength lies in its humbleness and simplicity, by its profound respect for nature. This paradigm is also manifested in the shan shui painting, one of the three genres of traditional Chinese painting, in which the integration of two elements leads to another dimension of the picturesque. The architecture itself manifests this balanced duality in many ways, with the industrial buildings as a modern interpretation of vernacular Chinese architecture, and the visitor buildings as elemental geometries grounded in the terrain.

Three long buildings housing the whisky production facilities are situated at the north side of the site; parallel in formation, they are tucked into the natural gentle slope of the land with gradually descending rooflines. In an interpretation of vernacular architecture, reclaimed clay tiles give a humble texture to the pitched roofs that rest upon a modern concrete post-and-beam structure. The infill of rock walls is made from the very boulders extracted from the ground during site leveling, so that the cycle of destruction and recreation may continue in permanent evolution.

In contrast to the vernacular roots of the industrial buildings, the two visitor experience buildings are built upon fundamental geometries: the circle and the square, which in Chinese philosophy represent heaven and earth, respectively. The round tasting experience building is partially submerged in the ground, with five subterranean tasting rooms surrounding a domed courtyard that contains a cascading water feature in the middle. The upper part of the dome reveals itself out of the ground slightly; with three concentric brick rings perched atop, it subtly mirrors the silhouette of Mount Emei. This sculptural landform becomes an iconic presence that can be seen from every part of site, and meanwhile, acts as a culminating destination from which visitors can enjoy a full panoramic vista. The square restaurant and bar building is located further down the topography, cantilevered on two sides with one corner hovering over the river bank. While the dining space is organized along the building’s perimeter for open views, at the core an open-air courtyard is oriented to frame the Emei peak as a borrowed scene.

Besides a deep appreciation for the site’s natural resources, the project is also an embodiment of the refined sense of artistry embedded in whisky-making and blending, which is in dialogue with traditional Chinese craftsmanship and knowledge of materials. A variety of concrete, cement, and stone mixtures form the base material palette, finding resonance in the strong mineral presence of the site. Accent materials are drawn from those used in whisky craft, such as the copper distillation pots to the aged oak casks. Throughout the project, Neri&Hu tries to embody the Chinese concept of the dichotomy of two elements that exist in opposition yet complement each other, and to strike a harmonious balance between architecture and landscape, between industry and visitor experience, between mountain and water. 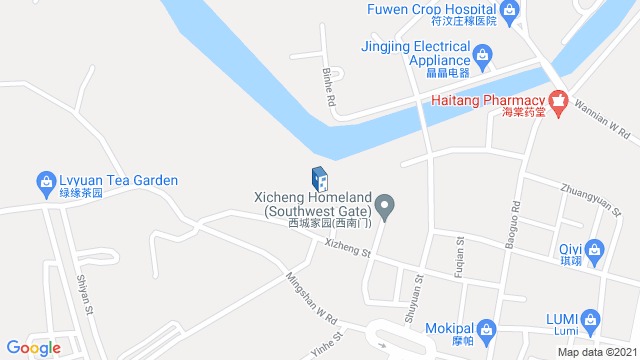 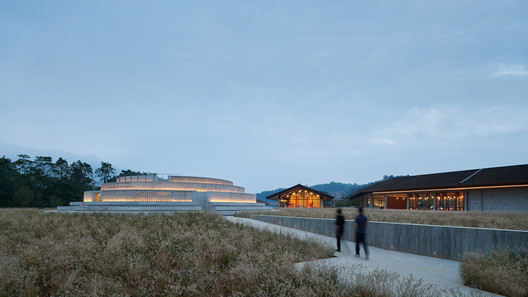