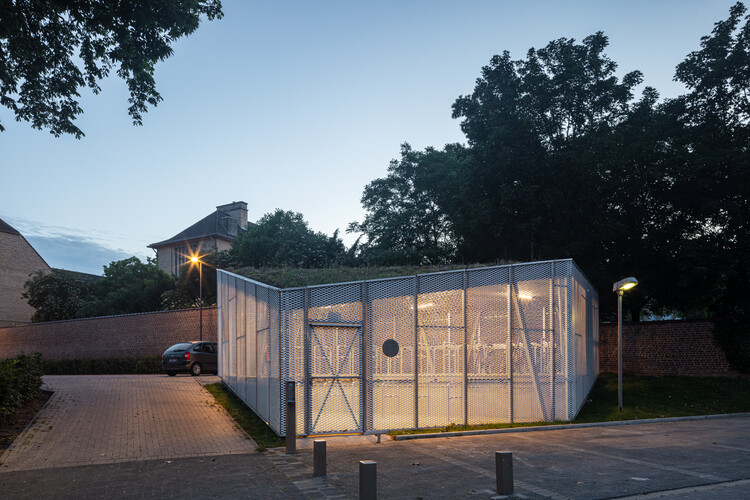 Text description provided by the architects. The design includes a new bicycle pavilion for 58 bicycles located on the site of the OCMW/City of Halle and more specifically in the slope of a “residual parcel” between the access road to the car park behind the Social House and the car park of the residential care center “Zonnig Huis” next to it. In order to match the design language with the existing architecture, the choice was made for a facade finish in expanded metal as previously used in the realization of the Social House (also a realization by WAW architects).

The pavilion has a simple structure in terms of structure and materials. Slanting and vertical I-profiles as columns support the slightly sloping concrete roof slabs and refer to the sloping concrete skeleton of the new meeting room of the Social House. The light steel structure is built on a concrete substructure, which also contains retaining walls to absorb the existing slope.

This consists of a difference in level in the terrain between the lower and upper car parks. According to the use of materials, the pavilion consists above and below of a concrete slab with metal construction in between. The further finish such as the rainwater drains, the bicycle brackets, the cable ducts, and the electrical panels are also made of metal. The existing difference in height is cleverly used to divide the building into two levels. These each have their own access and are physically separated inside by a stainless steel wire net, but completely transparent so that the pavilion is experienced as one space.

The lowest level is a public area for the safe and guarded parking of 14 bicycles or mobility scooters, accessible from the downstairs car park of the residential care center “Zonnig Huis”. On the highest level, there is a closed staff area for 44 bicycles, accessible from the upper car park of the Social House. Both areas are equipped with automatic doors, access control, lighting, camera surveillance, and charging facilities for electric bicycles. It is important with regard to safety that permanent evening and night lighting is also provided.

By giving the three concrete roof surfaces a different slope, the existing hillside is followed and the height inside is limited. The pavilion acquires a dynamic appearance, making it appear less massive. The slopes also make the green roof more visible. The expanded steel as the facade cladding provides transparency, allowing plenty of light and air to enter during the day so that it does not feel claustrophobic. In the evening, the interior lighting then has the opposite effect of a luminous beacon, the same appearance as the emergency staircase of the Social House.

From a sustainability point of view and for integration into the garden part of the site, an extensive green roof on the bicycle pavilion has been chosen as a buffer for the rainwater. The further drainage takes place in the direction of the existing wadi of the Social House so that infiltration on site is fully complied with. Finding the right location for the pavilion on the site was important in preserving the large old trees. 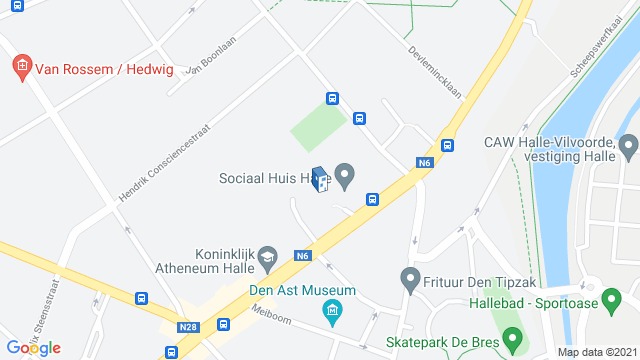