Save
Screened-In: Mastering the Brise-Soleil in France
Share
Or
Copy

The relationship between building envelope and structure remains a centerpiece of architecture. Understanding a building's skin is how designs become open or closed, controlling environmental conditions, light and views. Whether perforated, slotted or modular, brise-soleils are elegant envelopes that create new spatial conditions. This is especially true in France, where architects are rethinking tradition to bring new screened structures to life. 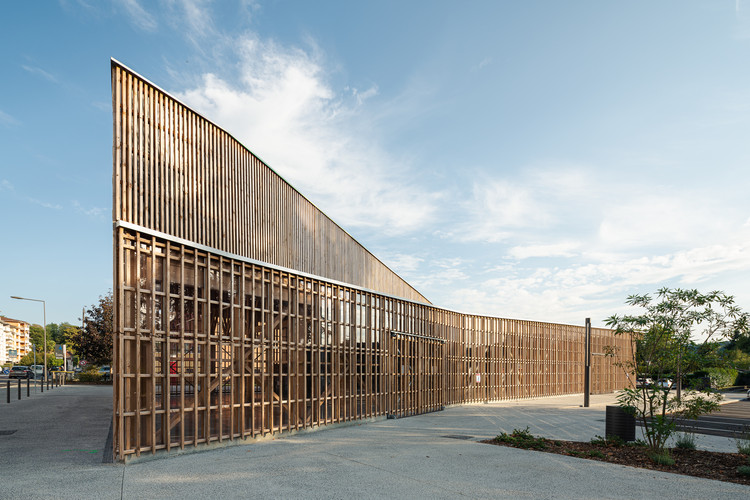 Shaping the perception of space, the following projects each explore modern applications of the brise-soleil through varied projects across France. Representing different materials, scales and programs, the projects all transform spatial experience. As devices that help mitigate solar heat gain, these sun-shading screens are designed around a building's orientation and form. Usually, they take the form of horizontal or vertical fins shading glass façades or expansive glazing. Each of the following examples reinterprets conditions of shadow and light through contemporary applications.

As a court project, multiple types of brise-soleil were used to explore both vernacular and contemporary building strategies. As the team explains, the theme of the project is accessible justice. This is an unostentatious public building within the urban fabric. The diversity of the materials used personalizes and reflects the different aspects of the judiciary’s work. The richness of the volumes, both sober and sculptural, shapes this interior space with an idealized, private urbanity, lending the whole the character of a small-scale yet very real judicial center.

The elected representatives of Pornic County had expressed their passionate commitment to regional traditions, immediately excluding any architectural shapes which would not follow traditional volumes and templates from the Retz region. Playing off the brise-soleil, the project was inspired by local salt warehouses shapes, the "Salorges" common in this part of the Atlantic coast from the Guérande peninsula to the Vendée region. They are long buildings, simply made; ​​out of (and cladded with) timber. Thus the team combined two simple volumes, following the shapes of traditional buildings in the area.

Traditionally, dojo has to obey to a specific orientation. The honorary side is called Kamiza and faces the South. The teacher always seats with the Kamiza on his back. The other side is called the Shimoza and is for the learners. In this project, the dojo is gently set on natural slopes to the East, towards the knowledge, reinforcing this sensation of rising created by the project's elements. The free plane turns with opacity, translucence and gaps playing with light and shadow. Black is its color, wood is its materials, translucent are its openings with integrated brise-soleils.

This building’s elliptical form is naturally inscribed within the existing curvilinear landscaping. The facades are conceived as a natural wood screen wrapping around the building. Alternating between opaque, filigree, and open space, the screen becomes both a fenced enclosure and a refined brise-soleil. The building plan is stratified in three principal bands: a multi-sport gymnasium and bleachers / support spaces / multipurpose room.

At the core of the urban renewal project for the Mireuil district of La Rochelle, “La Queue du Lézard” (“The Lizard’s Tail”) is a complex of local community amenities. A community center, city sports grounds and a games library are grouped together in a 200 m long narrow strip made up of alternating built elements and voids. On the south façade, the “props” are detached from the façade and support brise-soleil sun-breaks.

One of the objectives of this project was to participate in the development of the timber industry, using local resources. This involved initiating a construction process using materials in a short circuit. From the diversity of species that make up the richness of our territory, the team chose Pyrenean silver fir for the framework and Douglas wood for the cladding. To ensure the availability of materials, they met with stakeholders in the wood industry prior to construction upstream of its realization to bring the brise-soleil to life.