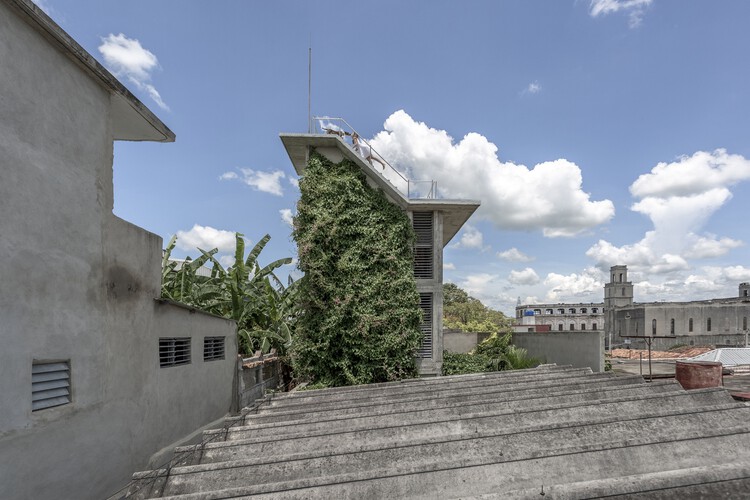 Text description provided by the architects. An unstable socioeconomic reality is at the base of the Casa Torre (Tower House) project. The prospect of an uncertain future shaped the program to which it tries to respond by erecting a watchtower from which to overcome the challenges to come. Casa Torre is located at the top of a small hill in a basically flat coastal city, which provides unexpected and exceptional views.

The lot, characterized by the existence of a prefabricated house with a backyard, is distinguished by an atypical front-back relationship in the compact fabric of the city and the advantage of a land occupation coefficient of less than 50%. In this plot, the work had to resolve an open program that requested a structure capable of functionally reinventing itself in relation to the prevailing “situation”: from precariousness to sustenance, from day to day to a full life.

The proposed action was then a building plot to be developed in phases: a building drawn from time, with an original nucleus in the form of a tower. Construction Stages: 1. Rental during the execution of the new house. 2. Posterior architectural reform or dismantling of 100% of its structure and integration into the progressive construction scheme planned in phases.3. Various division schemes and the sale of a part of the property.

The volume of the house, turned into a tower, is the resulting expression of the desire for a house with a garden overlooking the landscape in a very compact urban nucleus, in an almost naive gesture of establishing contact with a timeless reality, or at least not currently.

In this way, the general functioning of the house - daily chores, environmental conditions, and social expressions - is based and sustained on the relationship and dialogue with this landscape arranged in a vertical succession of spaces, with the public area on the basement, rooms -bedrooms in a body of two levels and a viewpoint at the top.

At the base, the garden unfolds contained by the perimeter that seeks to dispel the species that appropriate the walls and climb the entire height of the tower. The opening of a sliding gate transcends the courtyard to the interior and allows public life to unfold in this common space surrounded by nuanced shadows and humidity in the intense local climate. In the central volume, there are two rooms, conceived to accommodate various situations of family coexistence: flexibility to enable two bedrooms in one room, a workspace plus a bedroom, or their use as bedrooms for rent.

At the top, the environment is finally fully observed, it is the final metaphor of the filter of relationships that makes up the journey from the base, it is the point from which the house best expresses its spatial reflection and the relationship with its inhabitants, it is the moment in addition to exchanging with the city and its reality, like many other balconies already built at other points in time. At sunset, the tower house and the city are rebuilt in each visit. The perceptual question allows there that game of sublime reflection, as necessary as the house itself for the family that inhabits it. 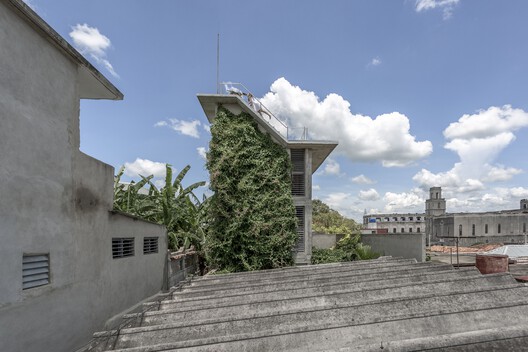