Save
Block 5B / RAUM 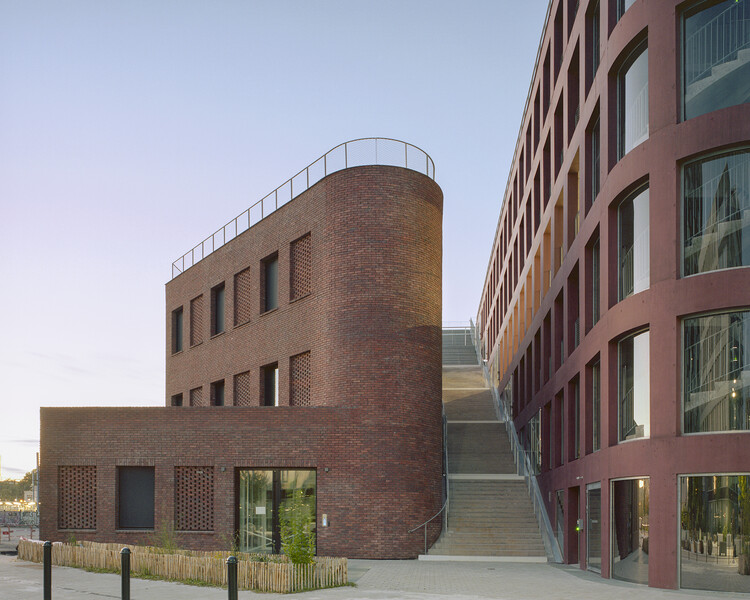 Text description provided by the architects. The Euronantes district, where block 5B completes the northern fringe near the station, contributes to the opening up of the Malakoff 1 district by connecting it to the Dalby district, the Olivettes district, and the historic centre, and the development of the western Île de Nantes by extension.

Regarding the urban challenge, the hypothesis led by town planner Gérard Pénot (Atelier Ruelle) and Nantes Métropole Aménagement finds its support in the architectural project by no longer looking to link up with a metropolitan centrality but by building the missing pieces of the city by being a centre.

This necessary dialogue with the city takes place at different levels: at large territory level, increased by the connection to the European rail network, at street level and neighbourhood level.

The project is therefore integrated as a connection tool between the proposed uses and the wider landscape and is built around 3 major challenges:

- The human scale as a benchmark: paths and uses at the heart of the project’s identity.

- An architecture which contributes to the district’s long-lasting qualification due to the quality and volumes of materials.

- The establishment of conditions for a programmatic diversity: clearly separate the entities to guarantee their modularity and promote exchanges.

1. An architecture of paths. Making an urban landscape on a human level, which is marked by the construction of a neighbourhood by the “pedestrian volume” work, is approached by the project via precise work on the porosity of the ground floors and on their clarity.

This approach is close to hodology, which studies the relationship between the body and the environment. When applied to territory, it tends to define the urban landscape by its uses, routes, and paths.

It is therefore continued throughout the project by providing a large staircase which not only guarantees the public potential of roofs by offering a street address but which also guarantees the pedestrian nature of the different car park levels.

2. The city material. The project image and identity are therefore reflected through its uses, paths, and capacity for the appropriation of facades.

Volumetrically separated, the different parts of the project fit into a coherent whole linked by the minerality of its facades and the variety of materials they offer.

Terracotta brick: the lower building (SNCF Réseau offices and workshops) and the accommodation tower block are treated with terracotta brick and are compatible with the different specific (and regulatory) needs of each programme: moucharaby solid brick for the openings of the SNCF Réseau building (high level of safety), thin mechanically fixed bricks for the accommodation tower block (seismic regulations), mass coloured concrete exoskeleton cast for the parking facilities and rough concrete for prefabricated floor elements (pre-stressed alveolar slabs, etc.)

3. Coherent heterogeneity. The division of volumes makes it possible to move from an interweaving situation to an adjoining situation by favouring the mix and hybridisation of uses.

The SNCF premises could thus be delivered in advance without interacting or overlapping with the rest of the project and the housing construction was phased independently from the car park phase.

The intrinsic quality of each fragment, linked to the possibility of autonomous operations, allowed the development of a simple project with an image in Nantes station of foundations: an adaptation consistent with the neighbourhood, using noble and long lasting raw material as well as a mix of uses offering an intimate relationship between humans and the urban landscape of Nantes. 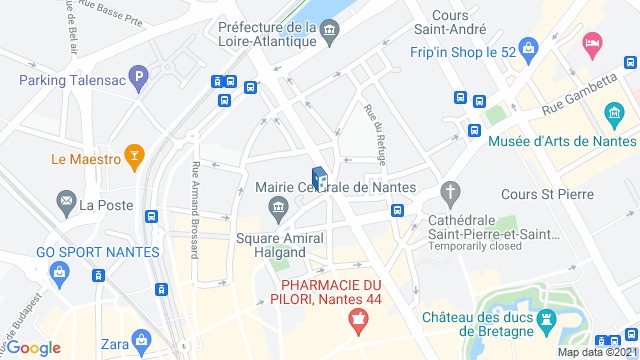 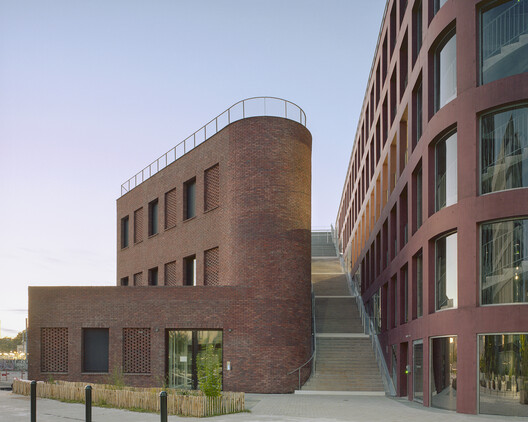