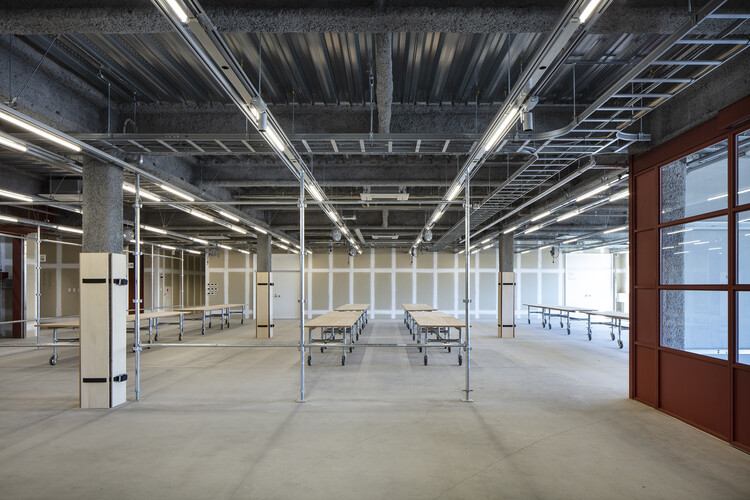 Text description provided by the architects. This "semi-architecture" is a building for the Interior Design Course at Musashino Art University.

Semi-architecture refers to unfinished architecture that continues to change through modifications made by the users themselves.  First of all, since buildings in art schools are used by students to design and produce their works and to hold critiques and presentations, we designed a system that allows users to move partitions and furniture flexibly to meet their needs. Instead of providing perfect "white cube" spaces where students worry about getting them dirty, we developed a common specification to apply throughout the building in order to create spaces that would leave room for them to imagine future possibilities and unleash their creativity.

Specifically, perforated raceways are suspended from a systematic grid on the ceiling. Poles are positioned in the holes in the raceways and connected with each other to create a wall. Wiring ducts, smart lights that can be turned on and off individually, and movable reel-type outlets are attached to the raceways, making it easy to increase or decrease the number of rooms. Other adjustable systems include a pole system, shelves and lockers that can be moved easily with hand lifters, and stackable worktables that can be reconfigured to suit one's needs.

We applied only the minimum amount of finishes, including the putty finish on plasterboard and rust-proof paint on steel, assuming that students will apply finishes according to their own needs. Signs on the walls and other surfaces are designed so that students can reproduce them using stencils and stamps, assuming that the surfaces will be painted over afterward.

It is in this semi-architecture that creativity resides. The space that embodies this idea changes its appearance every day by the hands of students and teachers who have taken over the helm of this school building from us.

This idea was originally conceived when we were involved in a project in Paris and visiting there frequently. Since many of the buildings in the city are historical, it is almost impossible to change their appearance. But for some reason, the city is filled with a rich variety of people's activities. Especially in summer, you see people dancing happily, chatting endlessly in a cafe, a young man playing the cello, and more. Every time we went to Paris, we were fascinated by the lively activities that filled the city.

One day, we stopped and carefully observed the city of Paris. Then, we noticed that there were many ingenious temporary structures and systems, including the market tent system consisting of pre-made holes in the ground with poles that can be erected instantly, benches and flowerpots that can be moved using hand lifters, open cafes operating on part of the sidewalk for which they pay rent to the city, and so on, and we realized that these structures and systems were generating a rich variety of activities. We decided to use this idea to enrich activities inside and outside of architecture. 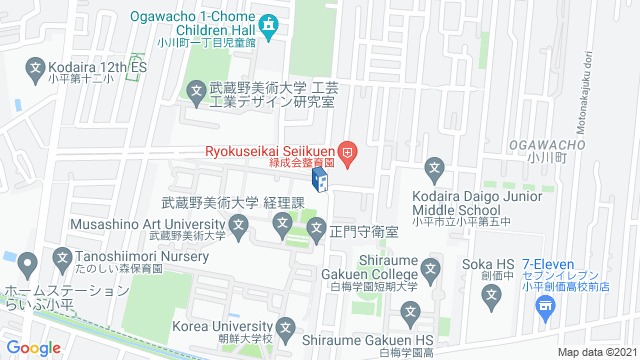 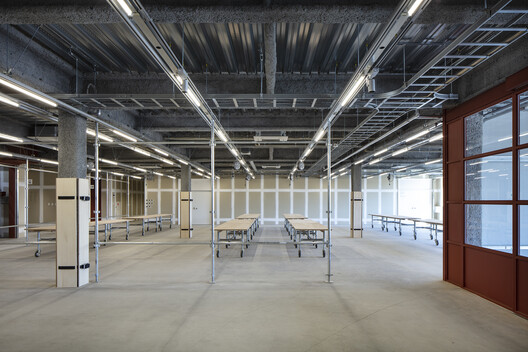