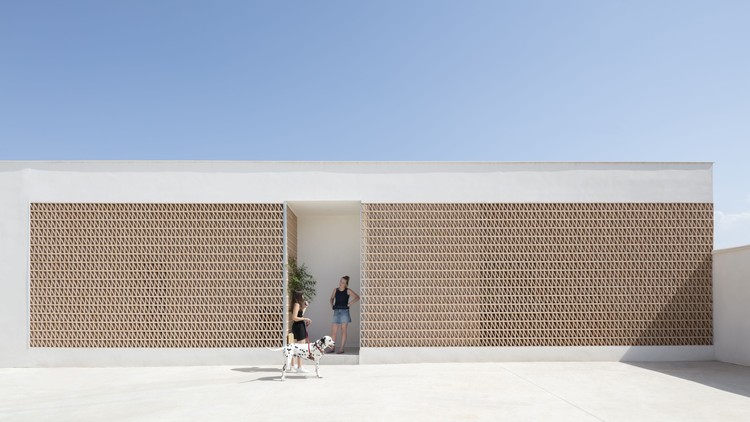 Text description provided by the architects. The project is located in Overa, a small district of Huércal-Overa, located in the north of the province of Almería, next to the Almanzora river. It is a rural environment with strong roots in agriculture. Over the years, the urban fabric of the town has blurred the agricultural footprint of the territory. The dense network of ditches, in charge of supplying water to the abundant terraces in the area, has gradually given way to a network of tarred roads, which the town has urbanized. Despite this, ancient eras can still be distinguished, today with a renewed image far removed from those spaces where beasts were threshing, which reveal the original rural structure. This was based on a concentric arrangement around these collective workspaces, which over time acquired a character linked to leisure and social relationships.

The plot, an old terrace of orange trees segregated from the back of a family plot, lacks privacy and visuals, as it has been swallowed up by urban growth. Dividing walls of different heights and materials define its contour. The main concern of the young owners was to have an outside space with total privacy. Due to this need, it was decided to reverse the situation until now common in the rest of the town with houses aligned and open to the streets. The concept of an era, typical of the place, is reinterpreted, generating one inside whose enjoyment is exclusive to the inhabitants of the house. This “era” conditions the internal circulation of the house, building a circular route that divides the program into two halves, a day and a night zone, connected laterally by two-hybrid spaces. These assume the function of a general dressing room in the bedrooms, and a multipurpose room, which can function as an outdoor porch in summer, an auxiliary room, a games room, or a library. At the same time, the central free space allows alternative transverse routes that guarantee natural cross ventilation. When the good weather accompanies, it becomes the main space of the house, being able to be used as an open-air cinema.

Also, the need for privacy derives in the search for a blind facade that guarantees the privacy of the interior. To do this, a false frontage has been built, made with ceramic pieces, which sifts the relationship with the street and acts as a passive protection for the south facade. Generating a mattress space that can be used as a clothesline or terrace.