Save
Two houses on the Cliff / tabaibo atelier 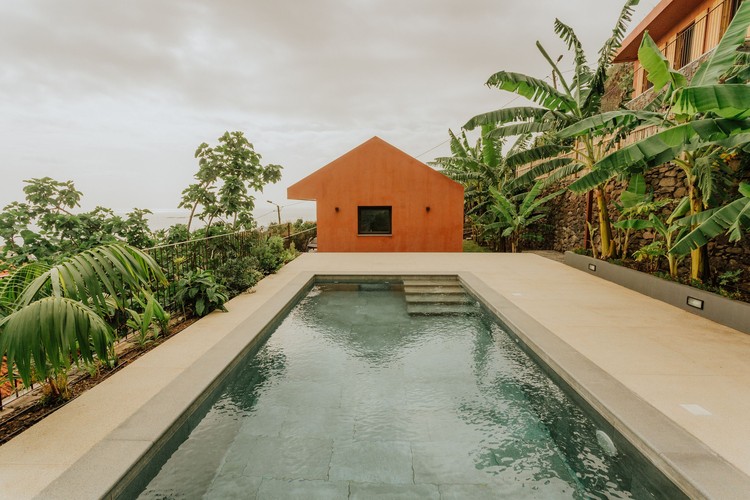 Text description provided by the architects. The project includes the construction of two single-family houses in Arco da Calheta, a few meters from the coast of the Atlantic coast of Madeira Island. In a land mostly occupied by banana cultivation, the terraces, characterized by walls of basalt stone masonry, are structured along the orography of the site. They create a unique atmosphere and ensure a favored view of the surrounding landscape. This area has the particularity of having a dispersed population, with buildings built on plots of land of variable size that in its genesis had a predominantly agricultural vocation.

Thus, we started from the desire to maintain the character and rural atmosphere of the building. The terrain's rugged topography ended up providing the rationality of the solutions for the spaces of the two houses developed on two levels and the organization of the functional areas, by establishing the social area on the upper floor of the dwellings and the intimate area on the lower floor.

Two small bodies inserted longitudinally on the terraces are built by dismantling the existing stone walls and excavating the earth. It is as if on occasion, although connected from the inside, we had placed the two houses on the existing terraces. One is located along the path and another further south of the plot.

The land with a total area of 600m2 faces the north, the Fajã do Mar path, to the south a neighboring land, to the east the easement to the division and to the west the footpath of Nossa Senhora da Vida. In front of the path, a common parking lot was created for the two houses. Access to the house facing the road is via a connecting stairway between the parking lot and the entrance threshold and access to the house located further south through the easement to the existing share.

The houses are developed on two floors. The upper volume configures a kitchen area, a dining area and a living area, and the underground part contains the stairs that give access to the bedrooms, the toilet and a support area outside the main building. The entire ground floor is ventilated through a technical concrete ditch and small openings that were carefully torn in the facades of the stone walls. The landscaping treatment seeks to integrate itself into the surroundings, introducing new leisure elements such as the swimming pool and mini-pool.

Through the material of the place, an attempt was made to create a more plastic and synthesized language characterized by the use of the color and texture of the place. Inside, the principle of synthesis offered by spatial and material simplicity is also chosen. The idea of interiority is reflected in the control of openings, strategically located for the landscape.

The use of passive energies generated by project options, the heat pump's renewable energy technology and the use of water for the irrigation system contribute to an environmentally sustainable and responsible energy efficiency.