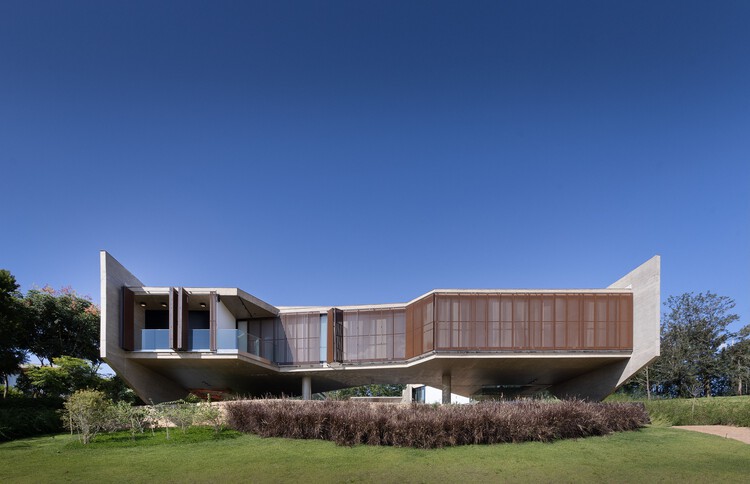 Text description provided by the architects. The design process for Berkut Baroneza House starts from a simple initial concept, the creation of a horizontal volume, almost laminar, that would rest softly on the unevenness of the terrain to create its various views - both the intimate and the furthest ones, overlooking the valley ahead. From this first glance, the concept was established: an architecture, subtle and intrinsic to the local context of Bragança Paulista, in the interior of São Paulo.

With this in mind, we opted for a composition that would emphasize what is most fundamental in this house, its structure. By choosing to use ribbed slabs, an evident absence of beams is created in the house, together with a scarcity of support points, which occur only through the structural walls, located on the sides of the house, and loose columns - which either meet the green of the land or the front water mirror, where they are reflected - thus emphasizing the slim elegance of the structure and the delicacy in which it touches the ground.

In the plan, the slabs are cut in a U-shape to create a bridge between the two side wings and establish a negative space for the inner patio. Facing north, the intimate wing of the house has a linear and perpendicular gable that opens to the suites in the center. The opposite wing, facing south, is segmented in mismatched parts, in an angular game of lighting and ventilation for the environments there.

Finally, the social area, facing west, connects the perimeter gables, thus creating a large space facing the beautiful natural landscape that surrounds and encompasses the entire house. As for its materiality, the choice was made for the minimum, the exposed concrete, the large glass panels, and the slatted wood panels intermingle, creating an efficient composition that unveils itself as a whole.

Finally, the environments thus created are, besides the kitchen and pantry, mainly composed of a fluid sequence of living rooms, living rooms, suites, and their respective balconies, with a discrete hierarchy that allows the creation of different moments of encounter and privacy. A permeable dwelling is thus constructed throughout its ample 750 m²: structurally diminutive at the same time that it seeks to be generous in its spaces.