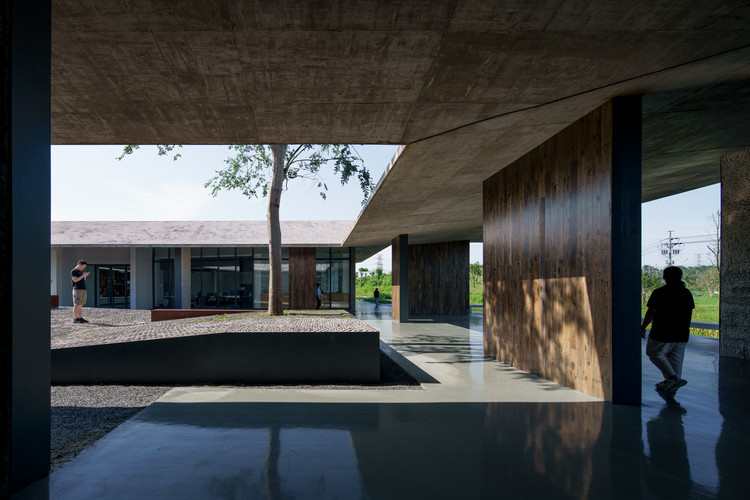 Text description provided by the architects. In early 2019, ALL Studio was asked by HUATENG Co., Ltd. to design the exhibition hall of Shiwan town (an ancient town in the south of Wuzhen town) in an agricultural tourism park. In the planning design, the whole park retains the original natural feeling to the greatest extent. When people enter the site from the southwest corner of the park, they can see the plum forest and open grassland surrounded by bamboo fences in the park. Therefore, the design consideration of the exhibition hall building is also defined as a simple and rough temperament in nature from the beginning of the design.

The exhibition hall is located at the west part of the park, adjacent to the main entrance of the park, close to the municipal road in the west, and the landscape and water system in the East of the park, facing the organic restaurant across the lake. The form of the building is composed of two physical spaces and one courtyard, from south to north, followed by a souvenir shop, courtyard, and exhibition space. The subtle connection between the natural landscape of the whole park and the functional space contained in the buildings, at the same time, the vision and feeling of several courtyards have also been concerned from the beginning.

The first _ "Moon wall." At the entrance of the main building, we set up an "Emphasized Space", that is, an arc-shaped "moon wall". From the parking space, we can see the flow of people from the huge gap, as a hint. When people walk into it, the moon wall brings the sky into people's sight. As a conversion space, nature is also incorporated into architecture and experience.

The second _ "Elm courtyard." The central courtyard of the building is sandwiched between the souvenir store and the exhibition hall. This is a courtyard centered by the "Big Elm" in the middle which is selected from the trees planted in the park. The east side of the courtyard is open to the lake in the park. The load-bearing wall frames the scenery of the lake bank, like a long roll painting. The space is also visually elongated to the East, forming a layer by layer extension of  "Corridor – Courtyard – Corridor - Lake". The roof of the four slopes is pressed down and gathered in the center, the roof adopts a double-layer hollow cavity concrete structure, which the thickness gradually becomes from 80cm to 10cm from the outer to the middle, and the surrounding space under the eaves is dark and deep. The surrounding wind, light, and rain are gathered in the yard, becoming a quiet little world. The ground in the courtyard is composed of two stacked groups of vertical tiles, each gradually rising and staggered to two directions. The rising landscape platform bonded with elm trees echoes with the lower patio, bringing together Sky, Earth, People, and Architecture, which has become the spiritual meaning of “Elm courtyard”. The buildings exist in nature with a detached attitude, on the other hand, it is also baptized by nature at the same time.

The third _ "Lakeside." The north part of the building is the exhibition hall space and the transparent curtain walls on the south and east sides open towards the “Elm courtyard” and the lake which is on the east side of the site. The internal furniture is customized arc-shaped tables and chairs. The east side of the exhibition hall is next to a group of grey spaces and a river quay. As the last stop of the building, the river Quay is set to a close height to the water surface. It is a sinking space, and the change of materials which are used indicates the change of spatial properties here; The wooden bench "growing" from the quay with its back which offers flowers home provides a resting place for people to talk and rest here.

Ending. After people enter the space, the changes of experience come opening, masking, entering, compressive, pause, turning, adhesive, and release. In the gradual narration, the body senses are fully mobilized and connected with the architecture and external landscape; It also shows the architectural noumenon closely combined with the external world through various space segments.

The exhibition hall building is a combination of entity and virtual body, which is similar to the relationship of rubbings. The two-building entities borrow scenery from each other with the central courtyard, which is interdependent, separated, and combined with the three entry gray spaces. In the selection of materials, same as other projects of ALL Studio, the common building materials used in the project such as reinforced concrete, steel, glass, tile, old brick, and wood have achieved a certain balance between space experience and material cost. 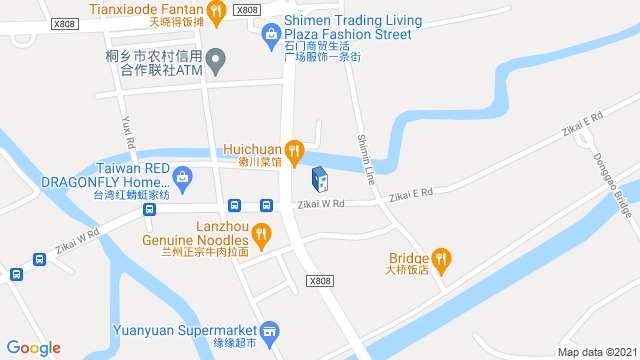 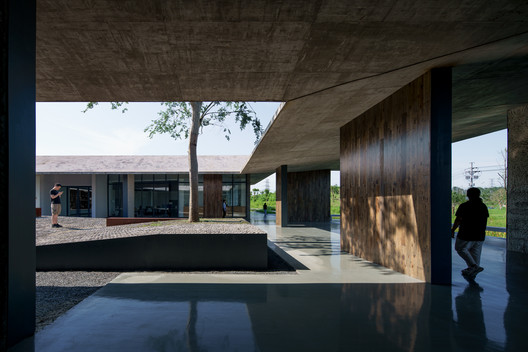