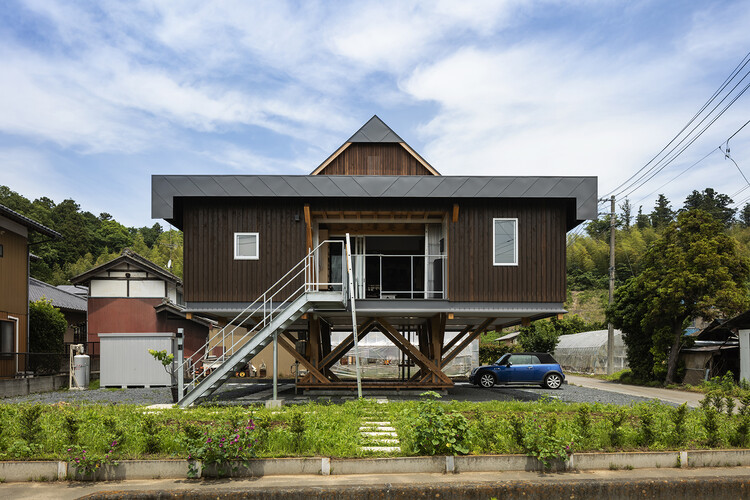 Diagonal Element and Time, Nine-Square Grid on Stilts - The site sits at the foot of an ancient tomb near a large lake. The north side connects to the slope of the tomb, and the south side extends out to the rice fields. Further out to the rice fields, you can see the trains heading into the nearest station. The section of this house responds to these contexts; the living space is lifted to the first floor to make the best of the view, and the ground floor is an open piloti space. The first-floor plan is constituted by nine areas divided by columns and diagonal elements, allowing the house to respond to diverse living situations. The central space surrounded by the four columns has a contradicting character; it visually connects to the other areas through the diagonal elements, but it spatially feels disconnected from them.

Structurally, in addition to proposing a structural frame supporting the raised floor, a new type of timber joint that could inlay a steel plate in the timber was devised. It enabled to bear load not on points but as an area. The four 240mm square columns bring the strength of traditional farmhouses, and it is also an effort to utilize the surplus large size timber. As for sustainability, several challenges were attempted with solar power using secondhand electric car battery packs and underfloor air conditioning with on-market air conditioners. These unique ideas are all proposed by our excellent collaborators. Of course, these challenges would cause significant challenges, but the construction company from the nearby town dealt with them patiently.

Historian - The client of the house is the architectural historian Noritani Nakatani. “Millenium Village Project” is one of his primary research that started after the earthquake and tsunami in 2011, focusing on highly sustainable villages. Ever since then, he has been thinking about moving out of Tokyo. He chose a site in a village in North-Kanto and asked me, who was also a project member, to design a house. This house is a collaboration between the two of us and is part of the “Millenium Village Project.”

The request from the client was to make a timber-stilt house that has a pleasant ground floor. Timber is a traditional construction material in Japan, and a stilt house is a practical typology for natural disasters like flooding. However, I could not think of a stilt house that has a pleasant ground floor. That is when the client showed me the farmhouses he researched in Indonesia. The farmhouse is a timber stilt house, which has a simple structural frame reinforced with braces. Moreover, the columns were placed in the inner area of the exterior walls. Hence, the ground floor has an open atmosphere resulting in the spaces used as communal space for the community.

Diagonal Element - The appeal of diagonal elements is its prop-like lightness making the structure look like something assembled with available parts and the eclectic improvisation of the combined use of tectonics. The Sanbutsuji Temple’s Nageiredo is a significant precedent. The diagonal elements similarly reinforce the structural frame, but it acquires a strong presence by taking distance from its geometry. Of course, diagonal elements as reinforcement can be commonly seen today as braces. However, there are few projects where they actively represent the elements as design. We rediscovered the forgotten diagonal elements in this project.

The Image for the House - When the client saw the structural model, he presented us with numerous images for the house; Engawa (traditional Japanese porch) to look over the scenery, Kura (traditional Japanese storage space), and a spaceship-like cockpit as a study that connects these images. The signboard-like façade, flashing board on the eaves, and the horizontal wooden bar from Shaker houses are also good examples. These images of the house seemed too arbitrary from an architect's perspective. However, they are things that come from the accumulated time of the client’s experiences. We tried to integrate these dense spatial images into the solid diagonal structure. Through this process, the abstract structure gained the sense of time.

Rationality and aesthetics are alone not enough to cope with these images. Usual structures that have structurally organized the forces would contradict these images, but having diagonal elements that differ from the rigid framework allows the fragmented images to coexist. The collaboration with the historian caused some friction but allowed the house to acquire a space that could not have been reached merely by an architect.

You could see all the structures on the ground floor of this house because it is a piloti. The first floor is based on Shinkabe so that you could see the columns and the beams. However, the diagonal elements differ in spaces; they independently appear in the space, fly out from the exterior wall, and are embedded within the walls and furniture. They are represented as something between structure and living, which feels like the odd one out of the house. We were careful of selecting the position, and the size of the elements to have a strong presence but not intervene with daily life.

The client moved in with an abundant amount of boxes that showed his accumulated time. His belongings did not contradict or blend in with the diagonal elements even after moving in. The odd diagonal elements and the accumulated time are things that were forgotten in modern houses. Still today, I struggle to verbalize their relation. However, it feels like I always wanted to design such a house. 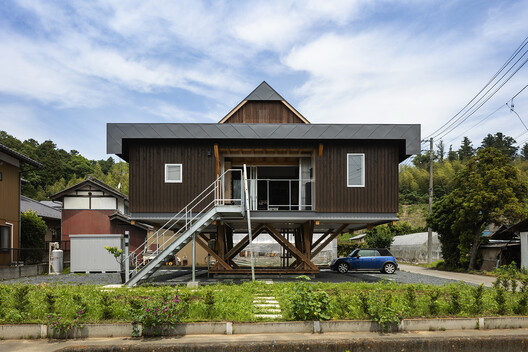