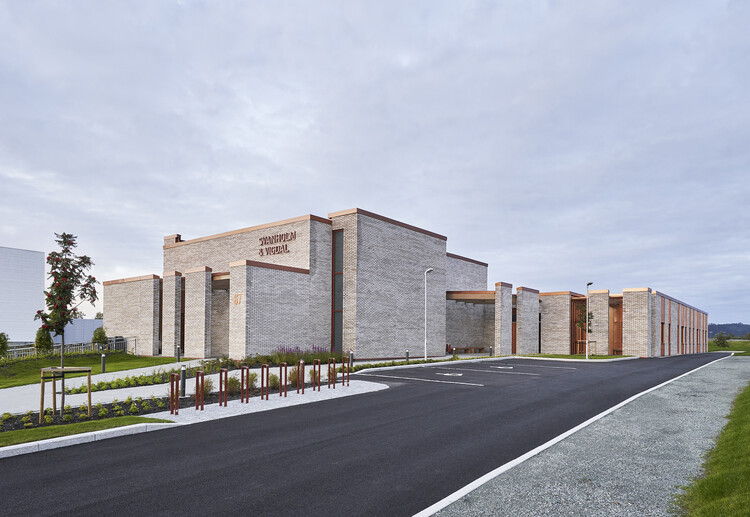 Text description provided by the architects. The intention behind this project was to offer a place for funerals that caters to people of all denominations of religious, spiritual, and humanistic beliefs. The client; Svanholm and Vigdal funeral home received increased demand for this kind of space and expansion was the main driver of the project. Simultaneously, they wished to establish rooms for discussions and viewings in connection with funerals, as well as employee offices. The design of the building is shaped around the logistics surrounding a funeral, whilst also enabling other necessary activities to unfold simultaneously.

When arriving through the main entrance the first thing you encounter is the foyer, which acts as a gathering point whilst also leading to the main ceremonial hall and the chapel of rest. Beneath these two lies the cold room where the caskets are stored awaiting the viewing and the funeral. In the front of the ceremonial hall, as well as in the middle of the chapel of rest, there are casket elevators where the caskets can be raised directly from the cold room. At the end of the ceremony, the funeral procession follows the casket out of the hall through the exit door at the back, where the bereaved have a direct connection with the hearse before its departure.

Alternatively, a passage on the opposite side of the foyer opens into a front desk, leading into the administrative wing of the building.

When choosing the main material of the building, a low-maintenance exterior was integral in the design brief. Brick became the obvious choice due to its integrity and stability, which is also important to portray in terms of the building's function.

The structural concept consists of individual brick monoliths that create the outer barrier of the building. To create, and enhance, the space between these monoliths, windows, doors, and prefinished, bronze-colored aluminum sheeting is used. In front of the various entrances, these monoliths are also implemented to support the glass roof and pergolas. In the front, and rear of the ceremonial hall, the monoliths are enlarged, as a way of letting light into the room, through big, frosted glass windows. Creating a sort of volumetric light that fills the hall, as well as blurring the outside.

To ensure optimal acoustics are achieved within the ceremonial hall, custom brick bonds are implemented with different acoustic functions. In the front of the room, the wall is laid in standard bond, creating a flat surface to reflect sound. The side walls are laid in a zig-zag pattern to disperse sound as much as possible and the rear contains openings, to absorb sound into a cavity within the wall.

After having moved into the building this summer, Svanholm and Vigdal have decided that they now wish to open the ceremonial hall to other kinds of ceremonies as well, for example, confirmations and weddings. By doing so they now provide the largest privately owned multifaith ceremonial space in Norway. 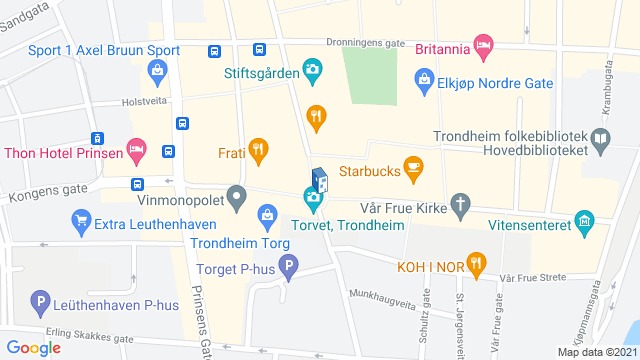 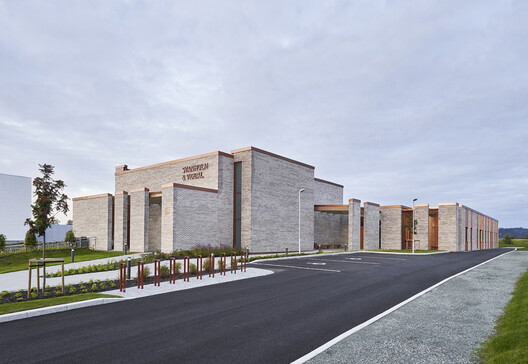