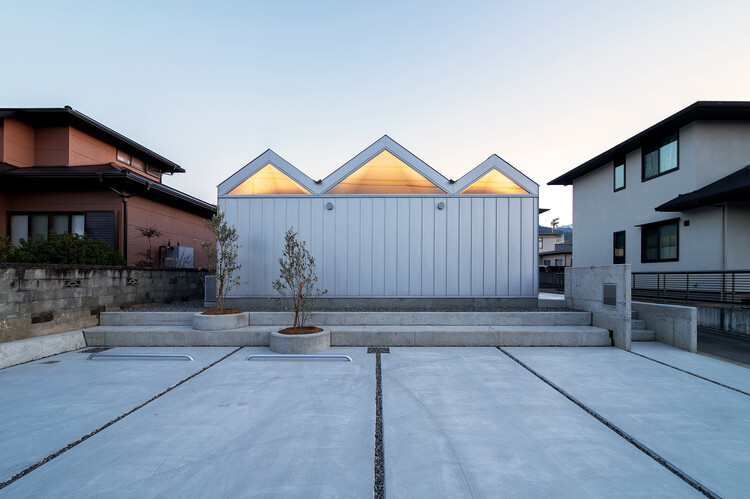 Text description provided by the architects. This house was planned to make use of the expansion of space created by the combination of a saw-tooth roof and sloped ceilings. The owner's request was a wooden one-story house that could cherish family ties. The planning is based on a 3x3 nine grid, with the family's common space designed as a one-room in the center, and the private rooms dispersed around, aiming to achieve both a sense of family unity and individual independence.

In a one-story building with a large footprint, natural lighting to the center is a challenge. Since it is an expansive ground and there is no need to worry about the eyes from the surrounding high places, a total of six triangular clerestory windows facing north and south are installed on the saw-tooth roofs, which are lined up in three rows in the east-west direction. The south side windows command the magnificent Shikoku Mountains.

The sloped ceilings are hung toward these triangular windows, channeling the natural light to transmit through the ceiling surface and diffuse into the deep part of the room. On the indoor side of the triangular window, inner eaves which serve both as a lighting stand and a space for equipment and storage, are installed to block direct sunlight from the outside and reflect toward the ceiling surface to reduce glare and heat.

The interior has two types of finishes: a common area with a natural impression centered on natural wood, and private rooms with plastered-wall-like wallpaper that creates soft shades. In the two types of spaces, it was intended to create a difference in the texture of light due to the difference in materials. For night lighting, the indirect light of the upright that illuminates the ceiling is used to provide suitable and sufficient lighting. This upright is designed to illuminate the entire vertically long ceiling surface in a gradual manner, by arranging a wide light that illuminates widely and a narrow light that illuminates a long distance.

The exterior of the building is an iconic representation of the saw-tooth roof and triangular windows. The roof and walls are covered with the same galvalume steel plate, and the equipment and openings are also in similar colors to create a massive appearance with a sense of unity. At night, the light leaking from the triangular window transforms the house like a lantern that illuminates the surroundings. Six spaces with different lights were created, by different directions and sizes of windows, types of glass, and different ceiling finishes and tilt angles. We decided to name this house "House of Six Lightened Ceilings". 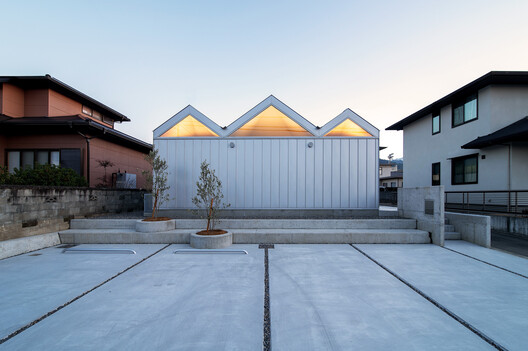