✕
Save
Squid Game: Minimalist Chic and Spaces of Oppression
Share
Or
Copy

People die in Squid Game. Lots of people. But while violence is one of the most appealing ingredients for the success (or failure) of a television show, that's not the only reason the series has become so popular worldwide. Pop culture, mesmerizing scenarios, and a plot full of social metaphors all contribute to this.

Available for streaming since September 2021, the Netflix series Squid Game “will definitely be our biggest non-English language show in the world, for sure,” and has “a very good chance it’s going to be our biggest show ever,” according to Ted Sarandos, the platform's co-CEO and Head of Content. The survivor thriller by director Hwang Dong-hyuk tells the story of a group of 456 people who are deeply in debt competing to win 45.6 billion won (around €33 million, $38 million) in prize money.

The participants are kidnapped, and when they regain consciousness, they find themselves in a large industrial-like complex and have to compete in six rounds of South Korean children's games. Players must beat each other in games like tug-of-war and marbles, but unlike in their childhood days, the losers are brutally murdered by rifles concealed in the sets, built especially for the games, or by masked gunmen dressed in pink jumpsuits.

Oftentimes the competitors recall childhood memories – sometimes happy ones – that may save them, giving them a certain advantage in the competition, but as they survive by watching others die, they are robbed of their humanity, after all, only one competitor can take the prize.

Almost as disturbing as the game itself is the way the architecture is designed. Clean, minimal, and calculated spaces, almost always in colors reminiscent of children's decorations, host the activities in an unsettling atmosphere of sweetness and innocence in contrast to the brutal acts of the organizers of this gruesome contest. Meanwhile, obscure, hidden, and cave-like spaces are used for underground activities, such as organ trafficking orchestrated by the guards in pink jumpsuits behind The Leader's back.

The detailing of the sets is exquisite. In an interview with Netflix Korea, art director Chae Kyung-sun comments on the terraced design of the metal beds where the players sleep. "Since modern society is constant competition to climb the ladder, we thought about portraying that in the bed design." Instead of treating them like people, she suggested the contestants be presented like objects piled on the warehouse shelves.

The most eye-catching element of the set design is, however, the vertical hallway of the gigantic underground facility. A maze-like staircase in pastel shades of green, blue, and pink – clearly inspired by Ricardo Bofill's La Muralla Roja (Spanish for The Red Wall) – is the backbone of the project, connecting environments on different levels and leading to all the minimalist and cavernous spaces.

Uncertainty makes labyrinths exciting. Unlike what many people understand as architecture, the primary function of these spaces is to confuse and disorient. This soft yet sterile structure with repeated elements confuses not only the viewer, but above all the players, who are forced to line up and ascend each step of the staircase as if it were the last.

Bofill's wall is not Squid Game's only visual inspiration, nor the most notable. The maze-like structure is an homage to the famous engravings by Dutch graphic artist Maurits Cornelis Escher (1898-1972), whose work features "mathematical operations including impossible objects, explorations of infinity, reflection, symmetry, perspective, truncated polyhedra, and hyperbolic geometry."

Escher's work and Bofill's project have aspects in common that have served as a visual reference for video games such as Monument Valley and the work of visual artists such as London-based artist Tishk Barzanji. Architecture, art, games, cinema, and television all share the same references, repeating the same visuals, making us feel as if we've seen it all before.

And we have. In 1745, architect and artist Giovanni Battista Piranesi (1720-1778) began a series of 16 etchings he called Carceri (Prisons). The work shows enormous subterranean vaults, staircases, walkways, and other architectural elements composing impossible geometries, as did Escher two centuries later. The prints, created through a cumulative process of drawing and redrawing, caught the attention of Sergei Eisenstein who stated, in his text Piranesi or the Fluidity of Forms (1946-47), that at the basis of the composition of those architectural ensem­bles "lies that same unique 'dance' which is at the basis of the creation of works of music, painting, and film mon­tage," pointing out a blatant connection between movement, architecture, and cinema.

Piranesi's prisons are impossible spaces that trap people in a maze-like environment. Entangled in these geometries, we are aware that we can easily get lost, but we still have faith that, at some point, we will find a way out - whatever it may be. Like the prisoners of the Carceri, the players of Squid Game, faced with the hardships of their personal lives, hope for a better future and end up voluntarily in an architectural prison where the only way out is the end. 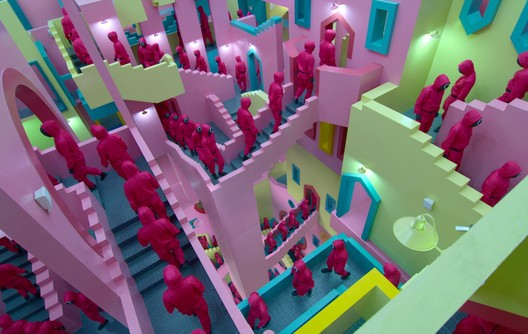