Save
Exploring the Principles of ReUrbanism: Adaptive Reuse at the City Scale
Share
Or
Copy

Cities around the globe have widely adopted the concept of adaptive reuse and the importance of investing in historic sites and bringing them into the present day. Instead of focusing on brand new, ground-up construction, many are seeing the value in repurposing structure for new programs. Old churches are becoming restaurants, factories are transformed into museums and apartments, and warehouses are designed to become iconic office spaces. But beyond individual buildings, some planners and preservationists are reimagining what it means to revitalize in a similar way, but at a city scale, and how we can determine the buildings that would benefit our neighborhoods if they are repurposed.

Enter the concept of ReUrbanism, first defined by the National Trust for Historic Preservation. similar to other proposals for how urban cores can become more pedestrian-friendly and built to the human scale. ReUrbanism focuses on ten guiding principles that describe how the reuse of historic buildings can bring social and economic benefits to cities. The idea goes beyond what it means to save a building from a preservation standpoint, but how people can interact with these projects in a way that promotes city branding and identity, promotes sustainability, enhances walkability, and advances a network of social creativity. The way that we think about the future of cities needs to incorporate some ideas from the past.

But how do we even define “the past” and what kind of buildings are deemed worthy of reinvestment? The historic character of cities is often a good measure of how much protection it might need from the wrecking ball. The signs are often obvious- charming rows of townhomes, small public parks tucked away from busy streets, old churches, and buildings with architectural styles not replicated since the early 20th century. To “measure” how much character a particular city has, the National Trust for Historic Preservation created “The Atlas for ReUrbanism”, a digital tool that helps identify cities that analyzes the built environment to note buildings of obvious and not-so-obvious historical significance.

The overall score is determined by the median age of buildings, the time span between these ages, and a measurement of how dense a particular area is. The highest scores are found in areas that have older buildings, a good balance of old and new buildings, and smaller structures- the combination of which shows that high levels of economic productivity occur in these areas. Perhaps unsurprisingly, the neighborhoods that have higher scores are often downtown neighborhoods of dense urban centers. With this data, the “Atlas for ReUrbanism” is able to quantify what makes adaptive reuse successful, and how it can be implemented in other cities.

Some of the interesting finds show areas where new development has not occurred. In Chicago, many of the buildings in The Loop are older and have significant architectural importance- therefore have been spared from new skyscrapers that are more concentrated along the river to the North. In New York City, much of the super tall towers are concentrated in the southern Financial District and areas just South of Central Park, where many headquarters and high-end luxury condominiums have been recently constructed.

The goal of this map, paired with the ideology of ReUrbanism, is to identify ways we can make cities better for everyone. A blend of building sizes and design qualities makes neighborhoods rich in community and enables people to live, work, and play in an exciting and dynamic environment. 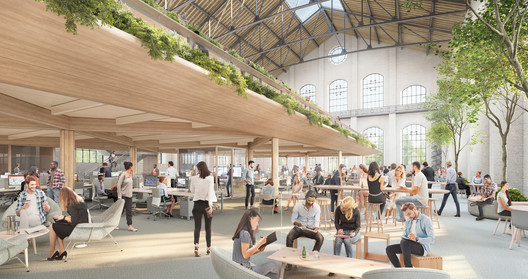