Save
Beyond Red: Architecture With Gray and Black Bricks
Share
Or
Copy

Pink Floyd's song “Another brick in the wall” criticizes an alienating and demotivating educational system. People, or children, are portrayed as bricks due to their homogeneity, whether in the way of living or thinking in a society that is not very fond of opposition. Bricks work very well in this comparison, having changed very little throughout history and around the world in their rectangular shapes. But that's not true of their colors. Although we tend to think of red when we talk about bricks, there are infinite possibilities of shades, depending on the composition and manufacturing process of the pieces.

The term brick refers to a block composed of dry clay, but is now also used informally to denote other chemically cured rectangular building blocks. The composition of clay bricks, the most traditional, as Tahsina Alam points out in her article for the Civil Engineering website, contains the following ingredients:

Clay is a hydrated aluminum silicate that contains alumina and silica. The color of bricks is influenced by the chemical and mineral content of the raw materials, and by the temperature and type of kilns used. This is why it is common for there to be slight variations between lots of solid bricks, which often aesthetically appeal to designers. The more iron oxide in the composition, the redder the final piece. The more lime, the whiter it will become. As discussed in this article, "iron oxide gives the brick a red color upon burning when there is excess oxygen available, and dark brown or even black when oxygen is insufficient." Below, we have separated some examples of projects that use unconventional shades of bricks.

Black bricks are appealing due to their sober and minimalist aesthetic. Their story is odd. In London, solid brick buildings are quite common, built mainly during the 19th century. Because of the soot present in the highly polluted London air at the time, the bricks ended up with a grayish or even black hue. As conditions improved after 1956, the buildings that were cleaned returned to their original color.

But there is also a way to add pigments to the mix, to make the brick naturally black. This brick pigment is also known as black ceramic oxide, black clay oxide or simply K37. K37 is classified as a 'ferric manganese umber' stain, mainly composed of iron oxide, a non-toxic, stable and long-lasting material.

Seoho-dong Residence / a round architects

As for grayish bricks, they are generally blocks that do not use clay in their composition. There are three main types: concrete, sand-lime and fly ash bricks. In the case of concrete blocks, they can adopt several different formats, with a characteristic color due to the cement in the mixture. In sand-lime bricks, a mixture of lime, sand and water is pressed and hardened in ovens under steam pressure. In this case, the blocks turn to a light gray color. Fly ash bricks are formed from by-products of coal burning and other industries, consisting mainly of fly ash and cement. They weigh less than concrete and clay bricks and, due to their low absorption rates, withstand heat well. Their color and homogeneity are extremely pleasing visually.

See other examples of exposed brick buildings in this My ArchDaily folder. 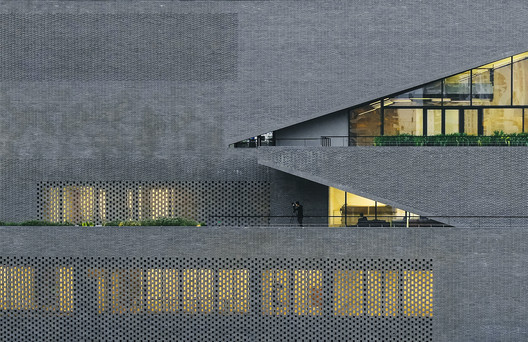