In the context of the ambitious project Satellite City in the outskirts of Mexico City, led by architect Mario Pani in the mid-20th century, Luis Barragán received from Pani the commission to make a fountain in 1958 that would serve as a distinctive motif of the entrance through the main road access to the master plan.

The renowned Mexican architect, together with the sculptor Mathias Goeritz, projected five concrete towers, with a triangular plan and different colors and heights, reaching up to 52 meters (170 feet). The towers are totally sculptural and the authors expected they could stand out viewed even from afar and in motion. 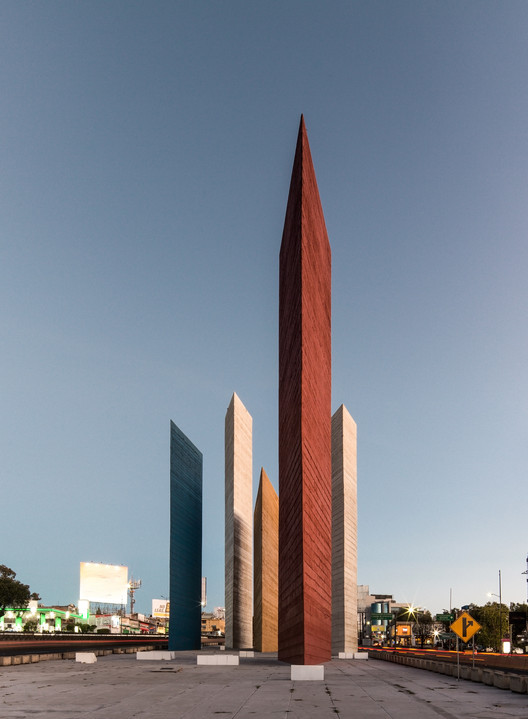 The five towers are set on a slightly inclined square, extending upwards as the viewer approaches. In this way, its verticality is accentuated like needles that are cut out in the sky, but with the contrast of its horizontal striations that, in addition to a texture, give it a certain quality of strength in its perception.

At the beginning of March 1958, the Satellite Towers were inaugurated as a symbol of the nascent Satellite City, under the government of Adolfo Ruiz Cortines. The work is viewed as an experiment—the inseparable conjunction between architecture and sculpture. Barragán and Goeritz worked on a conceptual project with huge volumes as an aesthetic exercise of the landscape viewed in movement from the roads.

This is how the sculptural ensemble is made up of five concrete blocks, with varying heights, implanted in an apparently random way on a concrete slab, hard and devoid of any other element.

The towers are totally hollow triangular buildings with no roof. The prisms manage to trick its geometry as the movement modifies its perception; sometimes as regular planes, other times as lines fleeing towards the sky: like fine vertices or like heavy walls. They have the texture of the concrete formwork with grooves every meter, which was achieved by applying the techniques used in the construction of industrial chimneys.

Therefore, the Torres de Satélite stand out for their intense color. The use of bright colors, as well as the arrangement of the towers, the texture, and their scale, integrate the Mexican with the cosmopolitan devotion. Throughout the years, the towers have undergone various modifications in their aromatic palette. The original colors were white, yellow and ocher, inspired by the towers of San Gimignano in Italy. However, on the occasion of the 1968 Olympics, they were painted orange, as suggested by Mathias Goeritz, to contrast with the blue ssky. Then, in 1989, the towers were painted again as follows: two white towers, one blue, one yellow, and one red, by the companies Nervión and Bayer de México.

In 2008 the project was remodeled by the Naucalpan City Council and private donors, removing the previous layers of paint using polyurethane foam shots and giving them their original colors again. In addition, architectural lighting was installed to further highlight this landmark designed by Barragan and Goeritz. 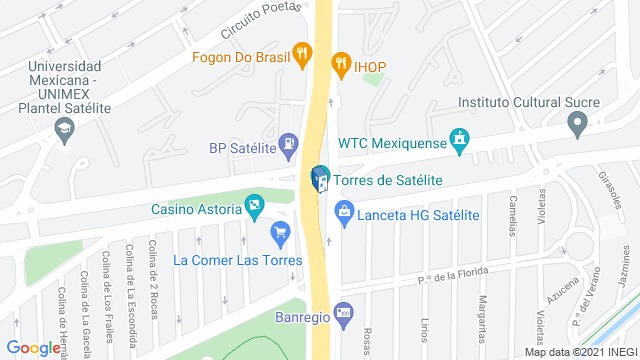 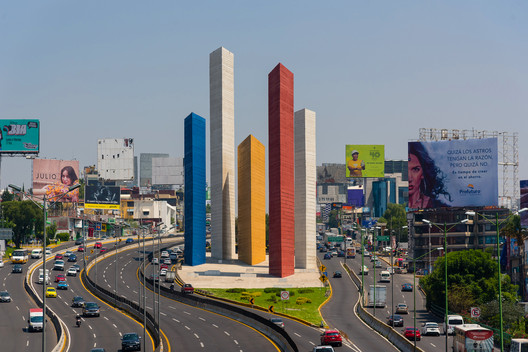